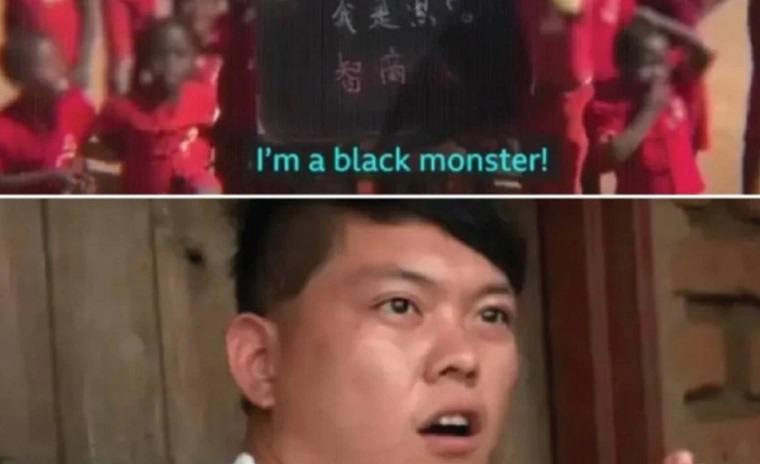 A screen grab of the BBC investigation

Rights groups in Malawi have urged authorities to quickly find and deport a Chinese man who was found to be making and selling exploitative videos of children. A BBC investigation found the man, Lu Ke, paid children to sing and speak Mandarin in disturbing videos that he sold online.

The BBC's investigation found that Lu Ke was shooting hundreds of videos per day and selling them at up to $70 apiece to a Chinese website. The kids performing in the videos were paid about half a dollar each. Lu Ke taught the children phrases in Mandarin in which they praised Chinese people, made fun of poverty, and chanted a racist epithet saying they are "a black monster" and that their "IQ is low."

Sylvester Namiwa, executive director for the Center for Democracy and Economic Development Initiatives in Malawi, said these videos are an insult not only to Malawians but also to Black people across the globe.

"We have also extended our call to [the] Chinese embassy to make a public apology to all people of Malawi and the Black community in the world," Namiwa said. "Failure to do so, we will be forced to mobilize Malawians to stage endless peaceful demonstrations."

The Chinese embassy in Malawi has condemned the contents of the videos, saying it will work with the Malawian government to ensure the matter is properly addressed. In the statement on its official social media platforms, the Chinese government further said it has noted the videos were shot in 2020 and that China has in recent years been cracking down on such unlawful online acts.

But Namiwa said the statement is distasteful.

"It is like they want to create an impression that since this thing was done in 2020, then there is no need to worry," he said. "We are telling them if ... it was filmed in 1906, we should have asked them to apologize no matter what. What we want is action, not the rhetoric."

Comfort Mankhwazi, president of the University of Malawi Child Rights Legal Clinic under the Faculty of Law, said her organization will hold street protests next week and present a petition to the Chinese embassy in the capital Lilongwe.

"One of the things we are going to highlight is that money was made at the expense of these children's humiliation and maybe for ignorance to what they were actually doing," she said. "We think that it's only fair if these children were compensated for that because in a sense, it's them that earns that money."

After the Chinese Embassy in Malawi was initially criticized for its tepid response to the scandal, dismissing the videos as old news because they were filmed in 2020, they released a new, stronger statement on Thursday.

The embassy said, “The Chinese community in Malawi has voiced their condemnation to racism in strong words,” adding that “the isolated case by a fool individual does not change the whole picture.”

China's top diplomat in the region, Wu Peng, has also been engaging in damage control. He went to Malawi on Tuesday, where he met government officials, tweeting, “Nice to feel in person the Warm Heart of Africa. Malawi is a beautiful country with lovely people.”

Wu Peng also tweeted, “I just reached an agreement with Malawian FM that both #China&#Malawi have zero tolerance for racism. China has been cracking down on these unlawful acts in the past yrs. We’ll continue to crack down on such racial discrimination videos in the future.”

The day after his visit, Malawi’s ministry for Foreign Affairs tweeted about a new Chinese scholarship opportunity for Malawians to study in China for a master’s degree, which some skeptics online saw as another way for Beijing to mitigate the fallout from the scandal.

Many Malawians are unconvinced by China’s apologies. The online news publication Malawi 24 reported that a Malawi-based group, the Centre for Democracy and Economic Development Initiatives, has called on the police to trace all Chinese nationals in the country and find out whether they’re there illegally or misrepresenting their reasons for being in the country.

Ralph Mathekga, a South African political analyst, told VOA that China has a history of racism toward Africans, yet governments on the continent were often loath to raise such issues because of Beijing’s economic clout.

“The video is not too surprising. … I think China is never brought to account in human rights and race relations in the country’s relationship with Africa,” he said.

But Cobus van Staden from the South African Institute of International Affairs said the videos could still be damaging.

“These kinds of depictions of Africans have a long, bad historical precedence. … I think it could be harmful for China’s image on the continent,” van Staden told VOA.

In Washington, Marco Rubio, a Republican senator from Florida and one of the most vocal China critics in Congress, tweeted about the BBC documentary, saying it was “disgusting and inhumane” and directly blaming the Communist Party of China.

In the meantime, Mankhwazi is appealing to the governments of Malawi and China to help track down the culprit, who is believed to have left the country.

+2 #1 Jose 2022-06-17 07:54
Chinese is a weak society they are known for poison
All countries that work closely with china even as a government poisoning of its people is a killing method, we wonder why allow them in Africa

Am sure if we expelled china nationals and keep them back to China they can even eat eat other
Quote | Report to administrator
+2 #2 Zaitun John 2022-06-17 09:33
Not a word from Chinese worshipers, the so-called Ugandan principled leaders!
What Malawian authorities have done will go along way in African historiography. Where as Ugandan authorities worship these Chinese for demi-gods, the Malawi administration has used the right words which have even made Marco Rubio, American Republican senator from Florida react in strong words.

Iam quite sure that had this occured in our shit-hole Uganda, the Minister would have recalled and sent six feet underground for insulting a yellow man, a so-called investor.

What has happened in Malawi should be looked at as an eye-opener. It is because we are so naive and believe in getting rich so easily that these friends of thieves are damaging the once beautiful country.

By the time we wake up, everything will have disappered from Ugandan soil.
PAY ATTENTION OR WE RISK LOSING EVERYTHING UNDER THIS REGIME OF IMBECILES!!!
Quote | Report to administrator
0 #3 kabayekka 2022-06-18 23:58
African governmentso should have been the foremost to discover such educational mess that was being done to the children of Africa!

What of the youth drowning near Europe every other day trying to run from unemployment on the continent? Surely in a way the play acting children were depicting black monsters as the murderous Africa leaders who do not want to be taken to the ICC to face justice!
Quote | Report to administrator
Refresh comments list
RSS feed for comments to this post
Add comment