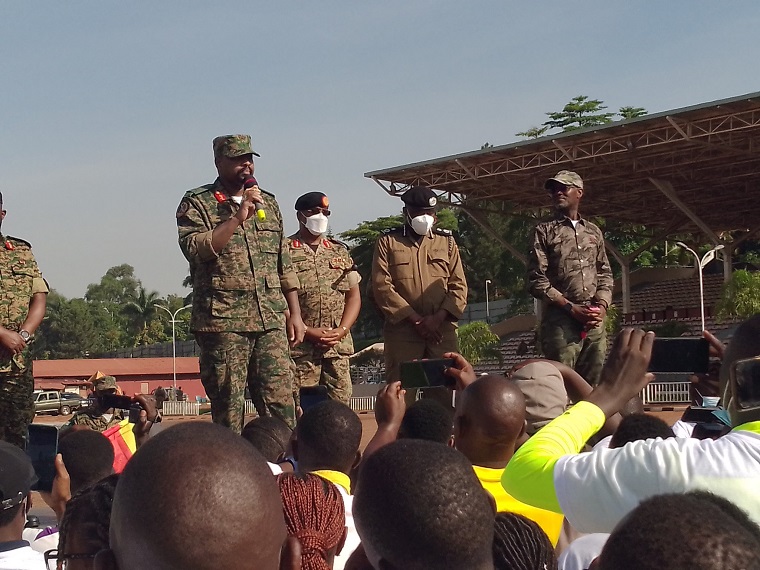 A fringe politician no more, First Son and Commander of the Land Forces Lt. Gen Muhoozi Kainerugaba has catapulted himself to the national political stage using a string of provocative tweets, speeches, a fanatic legion of youthful supporters, and a countrywide birthday celebration.

Lt. Gen Muhoozi is many things to his legion of youthful supporters – he is the next president, he is presidential material, chairman MK, Gen Muhoozi my role model, Team MK, MK 2026. All these and many other credentials are boldly inscribed on branded T-shirts, jumpers, caps, shirts and posters, printed, distributed and worn by his legion of supporters –loudly touting Muhoozi’s leadership prowess.

In May 2013, Daily Monitor published a letter in which then coordinator of Intelligence Services David Sejusa urged the head of Internal Security Organization (ISO) Brigadier Gen Ronnie Balya to investigate what he said were “claims” of a plot “to assassinate people who disagree with this so-called family project of holding onto power in perpetuity”.

In the letter, Sejusa cited himself, Uganda’s former prime minister Amama Mbabazi, former police chief Gen Kale Kayihura, and now deceased former army commander Gen Aronda Nyakairima among those at risk of being assassinated for opposing the Muhoozi’s succession plan. Sejusa also mentioned messages he claimed he sent to the president “about the likely consequences of what the public has dubbed the Muhoozi issue that is becoming divisive and creating fertile ground for causing intrigue, especially in the army.”

The renegade general was the first to lift the lid on the now famous or infamous ‘Muhoozi Project’. Before the Sejusa missive, Muhoozi’s succession plot was discussed in private. It has, however, spilled into public view. What remains now is a bold declaration and that seems not to be far away. Since Sejusa blew the whistle in 2013, Muhoozi has risen two ranks to become a lieutenant general and commander of the land forces with a tight grip on the Uganda People’s Defense Forces (UPDF).

Speaking to the media shortly after his promotion to the rank of major general on May 26, 2016, Muhoozi dismissed the ‘Muhoozi project’ dubbing it a red herring. “I don’t have the ambition to be president. I am very happy in the military and that is where I intend to stay for some time,” he said.

In April 2022, Muhoozi through his Twitter page announced celebrations for his 48th birthday. In the build-up, different events were organized across the country. Shirts, caps, and other Muhoozi-branded paraphernalia were distributed. At Kololo Ceremonial grounds, a birthday marathon was organized, followed by a grand fete held for his loyal supporters at Lugogo Cricket Oval. Other celebrations were held in Rukungiri, Bushenyi, Entebbe, Fort Portal, etc. On April 29, 2022, UPDF generals captained by the Chief of Defence Forces Gen Wilson Mbadi and a select team of members of parliament played a football game in commemoration of Muhoozi’s 48th birthday.

The game was graced by deputy speaker of parliament Thomas Tayebwa. For Uganda’s crown prince, Muhoozi’s tweets have become the law or the official government position. On May 1, 2022, Muhoozi tweeted, “All those who want me to stand in 2026 re-tweet, all those who don’t like”. This attracted 13,3000 likes and 4,297 retweets. On April 24, 2022, President Paul Kagame of Rwanda attended a state dinner hosted at State House Entebbe organized to celebrate Gen Muhoozi Kainerugaba’s birthday.

President Kagame said that since Muhoozi had gone out of his way to resolve a standoff between Uganda and Rwanda, “he is ready for bigger things.”

Rwanda closed her border with Uganda three years ago, accusing the latter of harboring political dissidents opposed to the Kagame establishment in Kigali, torturing and detaining Rwandans without trial. On Twitter, Muhoozi re-tweeted a video of Kasambya MP David Kabanda captured when he appeared on NBS Barometer.

On-camera Kabanda said; “In 2026, Lt. Gen Muhoozi Kainerugaba is on the ballot paper. Since they have been saying the man (President Museveni) is tired, we have a youthful man, the lion of Magere. It is here walking. The lion has become a lion. You shall now hear the father of lions.”

Asked whether Muhoozi’s birthday celebrations were used by the serving military officer to road-test his presidential candidacy, Makerere University law don Prof Ronald Mayambala said, “Yes, it could be speculative. However, the UPDF has an elaborate procedure to follow if one wishes to quit/ retire from the army and join politics, which I think Gen Muhoozi will have to follow should he choose to join active politics...”

Interviewed by The Observer, an army officer who played the birthday celebratory football match between soldiers and parliamentarians, said that within the army ranks, the Muhoozi presidency is supported by most colonels and major generals below the age of 60 years.

“Any ambitious person who wants change within the army ranks will look at supporting Muhoozi. The reasoning is that if the government changes and Muhoozi takes over, these soldiers within these ranks (colonels and major generals) are considered to maintain their offices or be posted to new offices,” the general said.

The general added, “Within the army, I can guarantee you that 80 percent is with Muhoozi, whether people want it or not. People might think his influence is within the Special Forces Command (SFC), which could be true but it is beyond that at the moment. SFC is already a different thing.

That is why I can boldly say there cannot be any coup in Uganda when Muhoozi has taken power. SFC is an elite force. With SFC under Muhoozi’s full supervision, it’s very hard for a section of these other UPDF to stage a coup against an elite force. They know it is impossible, which means that Muhoozi has 80 percent of the support from the army with the top commanders already allying themselves with him to secure or maintain their positions in his
term as the president. You could say that there is no way anyone can infiltrate or compromise the army”.

Muhoozi has been a long-serving commander of SFC. Justifying the assertion that SFC is behind Muhoozi, the general said the recruitment of soldiers into the elite military force was based on recommendations from friends and families. There was a holistic checkup on each recruit into the force. Asked whether Muhoozi would run for the presidency in 2026, the general said, “I can’t say I am sure 100 percent but what I can boldly say is that he has taken over the army.

Yes, the army is now his because if he can summon whoever he wants at any time and he can give orders to anyone at any time including officers of a higher rank, then what can I say? If someone has taken over the army, then what about the country?”

There are, however, pockets of opposition to Muhoozi’s succession plan, the general said.

“I support the project but I can’t pinpoint those opposed for fear for their safety. I am very sure that we now have a spying project within the ranks of generals. We have spies spying on what we do and report to superiors. We think it’s one of the reasons why many senior officers are not only demonstrating selfless loyalty to maintain or get juicy positions in the next regime of Muhoozi but also ease suspicion...”

Asked why some generals are supporting Muhoozi’s presidential project, the general said, “We see him as another Kagame. Kagame might be too tough but he is delivering for his country. We believe that some sluggish work that is still in the army is going to end. For someone like me who looks at a bright future for my family, I would rather be on Muhoozi’s side. This is also risky because the father (Museveni) still wants power. Most top officials are still confused because we don’t know whether he [Museveni] is handing over to the son or he is still in power. We are held up in the middle. We don’t know who of the two [Muhoozi and Museveni] we should please. Team ‘MK’ is a very dangerous project. It is going to take down some people and have others promoted.”

In a May 6, 2022 petition filed before the constitutional court, lawyer Gawaya Tegulle has jointly sued Gen Muhoozi Kainerugaba (first respondent), the Chief of Defence Forces (second respondent), and the Attorney General (third respondent). Tegulle argues in the petition that, “The acts of the first respondent [Gen Muhoozi] dubbed MK@48 including national and district
birthday celebrations as well as political pronouncements in general and the manifest presidential campaigns in particular, on the first respondent’s Twitter handle, @MK, are inconsistent with Article 208 (2) of the Constitution that provides that UPDF shall be non-partisan, national in character, patriotic, professional, disciplined, productive and subordinate to civilian authority as established under the constitution.”

Tegulle accuses the chief of defence forces of failing to advise Muhoozi about the legality and tenable nature of his actions, character, and conduct which contravene the constitution of the Republic of Uganda and the UPDF Act. The Attorney General is accused of failing to provide good, fitting, and proper legal advice to the UPDF in general and Muhoozi whose acts and overtures are manifestly unconstitutional and not tenable in a professional army.

They want markets available for their farm products and other products they produce.
Report to administrator
0 #22 Charles Dicken Oruk 2022-05-14 11:13
i am sure you will not agree with me in what am going to say here. The problem of Uganda can only be solved by doing one of the two things I am mentioning here.

2. The capital city of Uganda after almost 60 years this year residenced in Buganda, should be transfered to another region. This is based on the political attitude coming from Buganda where the capital city is. At the moment, their politics has been bad and prevented unity and development of the country.
Report to administrator
0 #23 Remase 2022-05-14 12:13
Owner, you are right on the money. We, those of us who are desperately agitating for a fundamental change, must act in unicent and unison.

We are 7unbelievably divided! M7 has done each and everything to clearly demonstrate that he is a hard core organized criminal who used violence, highway robbery and killing of innocent people to capture power!

For over 4 decades, M7 has maintained the same to cling on power. However, our leaders in the opposition are continuously and consistently urging us to engage in bogus polls organized by a hard core criminal, M7, to effect change! Even if we are silent or don't go to the streets but simply inform M7 that let him continue his autocracy until Jesus comes back but reject participating in bogus elections. That way innocent lives will be saved.
Report to administrator
+1 #24 Remase 2022-05-15 14:03
The trending news now is that Shiba has claimed that Muhoozi raped her. There you have it!

As I have started over and over, we are dealing with hard core criminals. Shiba to come out and make such a claim, it's more likely than not that it's true. She has placed her life at risk. That's the incoming president of Uganda!
Report to administrator
0 #25 Lakwena 2022-05-16 09:30
Quoting Remase:

The trending news now is that Shiba has claimed that Muhoozi raped her. There you have it!

As I have started over and over, we are dealing with hard core criminals. Shiba to come out and make such a claim, it's more likely than not that it's true. She has placed her life at risk. That's the incoming president of Uganda!

In other words Remase, no wonder the perennial aggravated rapping of the 1995 Constitution for personal, familial gratification and aggrandizement.