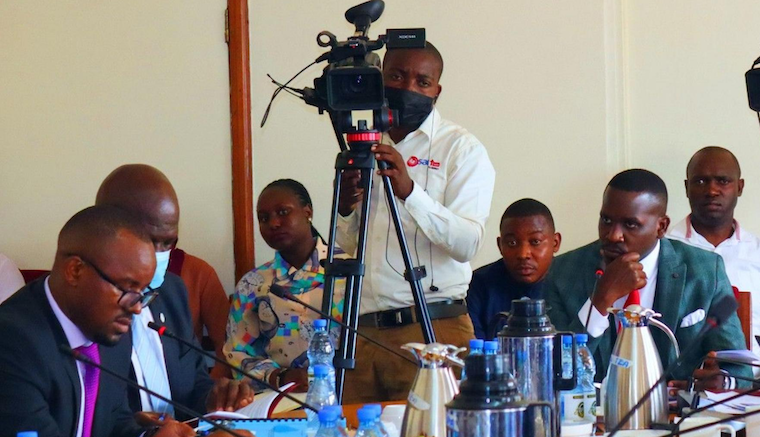 Officials from the embattled Uganda Land Commission (ULC) on Wednesday irked MPs after they revealed that they do not have an up-to-date land inventory.

This was after parliament’s commission on statutory authorities and state enterprises (Cosase) led by Nakawa West MP Joel Ssenyonyi, probed ULC officials over irregularities pointed out by the Auditor General report for FY 2020/21.

ULC led by Andrew Nyumba, the acting secretary told the MPs that they do not have a comprehensive inventory of government land and properties occupied by tenants, are vacant, or acquired under compensation.

Nyumba told the MPs that there were several challenges including Covid-19, and a lack of funds that has made it very difficult to develop a comprehensive land database for the country.

"That is correct," Nyumba said when asked whether ULC has no inventory before he changed his statement to "the correct word should be lack of a comprehensive inventory"

Roland Ndyomugyenyi, the Rukiga County MP wondered why the government continues to pay ULC, and proposed that their budget for the FY 2022/23 be deferred until their roles and scope of work are properly defined.

"So what business do they do? What are they doing exactly because they are not into production,  their business is primarily acquiring money of managing land on behalf of the government of Uganda. So why are we paying them? Why are they in existence if they are not conducting the business they are supposed to conduct for the government of Uganda for our people? You know we're in the budgeting process, you wonder whether we should even give them money in the next financial year," said Ndyomugyenyi.

Joyce Acan, the MP for People with Disability insisted that the commission must provide an inventory within the shortest period of time possible to exonerate them from land fraud allegations.

"We need to give these people time to go and generate an inventory because when the principal valuer was asked he, first of all, said they don't. Then later, he said they have a list. Can he provide this committee with a list of these properties that is under the management of Uganda Lands Commission? We want to know those properties that are titled out of freehold land and those ones that are leased and those ones whose leases are running out. We want all these details," said Acan.

Meanwhile, Kasilo County MP Elijah Okupa pointed out that the failure by the commission to have an updated land database is intended to defraud the country. He proposed that the board and Lands minister should be summoned to respond to some of the queries.

"That is why we need the minister here and the board of the Land Commission. That is the biggest anomaly, that is where corruption takes place, people do this intentionally in order to defraud the country, defraud the Ugandans...He's the accounting officer, how is he the accounting officer? You have to count in order for you to account," said Okupa.

The Land Act, Cap 227 requires the commission to hold and manage any land in Uganda which is vested in or acquired by the government in accordance with the constitution.

According to the Auditor General’s report in FY 2019/20, up to Shs 546 million was budgeted to establish a land inventory or database. As of March 28, 2020, the commission had already spent Shs 298 million.

According to the Attorney General, lack of a comprehensive land database hinders effective stewardship of government land. The report also revealed that the commission is battling up to 466 court cases.

Currently, the chairperson of ULC Beatrice Nyakaisiki Byenkya is serving a suspension alongside her secretary Imaryo Barbara following a directive by the minister of Lands, Housing and Urban Development Judith Nabakooba over alleged abuse of office.

+3 #1 WADADA rogers 2022-05-05 11:09
Oh my, this country is gone to the dogs, every one seems to be blaming everything for covid, what were they using as data base before covid broke out
Report to administrator
+1 #2 kabayekka 2022-05-06 19:43
It seems the Ganda land tenure system of which this government wants badly to change was only installed of recent with these Johny come lately?

These officials seem to be on standby from orders above to create a brand new land territory for Uganda!
Report to administrator
0 #3 Zaitun 2022-05-08 17:59
A man goes around stealing, grabs money for no work done and then blames Covid-19 for his failure to produce appropriate results.

I am sure, even those who havd become experts in stealing public funds and have banked them in over-seas foreign banks will blame Covid-19.

If Covid-19 could speak to defend itself, many a Ugandan thief, including those who came bare-footed and now braging around as billionaires in dollars would be stripped nacked to the sorrows of the devil, who in turn would blame them for using his name to bring shame to his family organisation.
Report to administrator