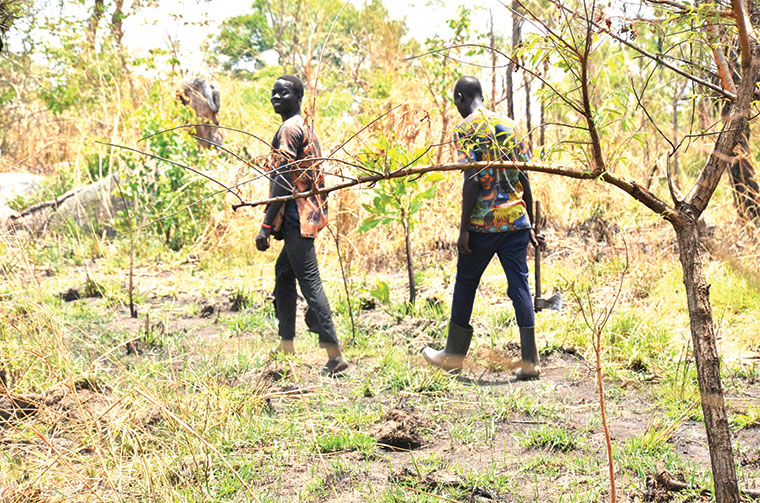 Youth embarking on a journey to cut trees for charcoal. Unknown to them the destruction of trees is responsible for the changing climate

For the past few years, the shifting rainfall patterns have been puzzling James Kidega. This year, the 57-year-old farmer is struggling again to track down his planting calendar, making it hard for him to prepare his rice paddy.

Last year, for instance, Kidega planted upland rice only for it to be submerged by floods due to torrential rainfall, three weeks later. At that time, more than 200 gardens were also affected in his community.

“The rain came early and it caught us unawares. It rained for almost a month and there was waterlogging which lasted three months,” said Kidega, a father of 11 who lives in Mede Centre village, Palaro sub-county, Gulu district, adding that he began digging trenches to drain water out of his field in vain.

And “most of the rice which had begun to sprout withered,” added Kidega, who in the end, harvested only half a sack of rice instead of the 14 bags he was expecting from his one-acre garden.

In the past, things were easy and clear for him. All he had to do was to make sure that his garden was ready by mid-March when the first rains began to fall.

But now the weather conditions have become extreme, with unpredictable rains and dry spells becoming common. Kidega is afraid that if the situation persists, “I might be forced to eat my seeds before the planting season.”

As extreme weather continues to be unpredictable, in Acholi sub-region, like elsewhere in the world, the challenge of growing food by small-holder farmers, who heavily rely on rainfed agriculture, is getting tougher with less reliable harvests.

A 2021 Dame Global Adaptation Initiative Index report ranks Uganda 12th  as the most vulnerable to climate change and the 49th least prepared country to combat its effects, globally.

For the past 25 years, Uganda has also lost an average of 122,000 hectares of forest every year due to large-scale tree cutting for timber and charcoal burning.

Deforestation adds to the dangers of climate change as tree loss disrupts the rain cycle and a warming planet. To avert this, Uganda has set ambitious targets to reduce national greenhouse gas emissions by 22 percent by 2030 to reduce the vulnerability of climate-sensitive sectors like agriculture.

Government agencies like National Agricultural Advisory Services (Naads) are also rolling out interventions such as providing smart-farming techniques and improved seeds to rural farmers who are most vulnerable to the effects of climate change.

In Palaro, for instance, waterlogging has been a major problem for the past four years. Many farmers have resorted to wide-scale tree-cutting for charcoal to eke out a living. As result, denuded lands, with mostly tree stumps, are ubiquitous. And when it rains heavily, there are no trees to slow or act as a drag on floodwater, experts say.

The rainfall seasons, which used to be quarterly - starting from March to June, with a break in between, and then from August to October - have been altering and increasingly erratic. Farmers in Palaro have been forced to switch to fast-growing crops such as groundnuts, chia, soya beans that take three months to mature from crops they used to grow that take seven months like pigeon peas, cassava, and rice.

As farmers hang on to that, they are also supplementing their efforts with growing improved seeds distributed by government agencies like Naads. But many farmers also complain that these seeds are often given out to them during the wrong planting seasons.

Indeed, most farmers in Acholi sub-region that this reporter spoke to share this sentiment. Dr Laban Turyagyenda, director of research at Ngetta ZARDI, blames this on ‘uncoordinated movements’ and bureaucratic delays by the government when procuring, identifying and awarding contracts to stakeholders who distribute seeds to the beneficiaries.

Now Dr Turyagyenda and his team are ‘directly’ working with small-holder farmers in 17 districts to ensure that they receive improved seeds timely based on a demand-driven approach.

‘The gods are still angry’

In Omuku village in Adilang sub-county, Agago district, the situation is even grimmer. For the past three years, locals in this village have found it challenging to farm. One farmer, Hamuza Mungu, 43, relocated from his hometown, Luweero district, to Agago with high aspirations.

He bought a two-acre piece of land in Omuku to begin farming groundnuts and simsim (sesame). But his dreams were shattered, a year later when he could not get reliable harvests from his garden due to long dry spells and unpredictable rains. Mungu has since given up on farming and has now begun cutting trees for charcoal.

Just like Mungu, many locals in Omuku village are charcoal burners. Charred remains of charcoal in farmlands and charcoal sacks standing in many homes are common; a clear sign that charcoal burning is now a major source of livelihood to many people in this locality.

“We sell charcoal to avoid starving,” said Mungu. “When we earn some money, we can go to the neighboring village to buy food.”

But the rate at which trees are being cut in Omuku has also led to an alarming loss of the already endangered tree species like shea. The deciduous trees are in high demand because they ‘make good charcoal’ since their wood structures are high-density in nature and charcoal made from them lasts long.

Another concern from the locals in this community is that shea trees have not been fruiting well for the past three years. Cultural elders like Rwot Kasimiro Ongom of Patongo chiefdom believe that “the gods are angry” at people who are cutting down the revered trees, adding that sacrifices need to be made to appease the gods.

“Even if you cut this tree from your compound, you will be forced to offer sacrifices, “added Rwot Kasimiru who says he has since been working with district authorities to enforce the strict ban on cutting shea trees.

But experts like Ngetta Zardi’s Dr. Turyagyenda note that this could be due to the extreme heat that has caused ‘flower abortions in the female shea trees thus making them unable to fruit’.

“The other reason could be that most of the shea trees that have been cut down are female and the remaining ones are males that don’t flower,” he added.

To reduce pressure on natural resources like trees, Turyagyenda and his team are training communities like Omuku in skills in alternative sources of livelihood like apiary, poultry, briquette making, and value additions to shea nuts through making soap, cosmetics, and wine.

Not much is flowing from the scheme

Further up north, in Lamwo district, farmers around Agoro irrigation scheme are not getting enough water for their crops. With long dry spells and extreme heat in the region, crop yields have reduced in this community which was once the food basket for many parts of Acholi and neighboring Sudan (now South Sudan).

In 2013, the ministry of Water and Environment pumped Shs 27 billion into the rehabilitation of Agroro irrigation scheme to boost agricultural productivity for more than 10,000 farmers. But upon its completion, the volume of water from the scheme has not been enough for farmers to support their farmlands.

Since that time, farmers have expressed grievances over the subsubstandard work from the company assigned to rehabilitate the scheme. In April last year, the ministry again reached out to the contractor to rectify the deficit but farmers are appealing to the government to monitor the ongoing work closely to avoid the same problem from happening again.

“If they fail to fulfill their duties, the government should not hesitate to terminate their contracts,” Mr Onekgiwu, a vegetable farmer, said in an interview.

At the moment farmers like Onekgiwu are growing quick-maturing crops to “help them escape from the dry spell and inadequate water.”

Kigum senior environment officer, Wany David Ojok, says the ongoing large-scale tree-cutting along the banks of River Agoro, which pours its water into the scheme, is also affecting water levels since trees act as an important buffer zone by reducing soil and water movement by increasing water infiltration and slowing the flow of transported sediments.

Back to Palaro. As waterlogging continues to menace farmers, many are turning to quick-maturing plants as their sticking plaster.

There is no magic bullet to this at the moment as most research on climate change in Uganda focuses on drought because it is a more common phenomenon affecting farmers compared to waterlogging and flooding where little has been done due to limited funding.

At Ngetta ZARDI, Turyagyenda says they are mostly engaged in ‘adaptive research’, a technology that involves improving and identifying different crops suitable for different regions affected by drought in Uganda.

However, he advises local farmers facing waterlogging to consider local solutions such as digging trenches in their farmlands and also properly planning for human-induced activities like construction that often block water channels from joining major reservoirs thus causing waterlogging.

This story was produced by the Northern Uganda Media Club (NUMEC) with support from WAN-IFRA Media Freedom. Views expressed represent those of the author and interviewees.