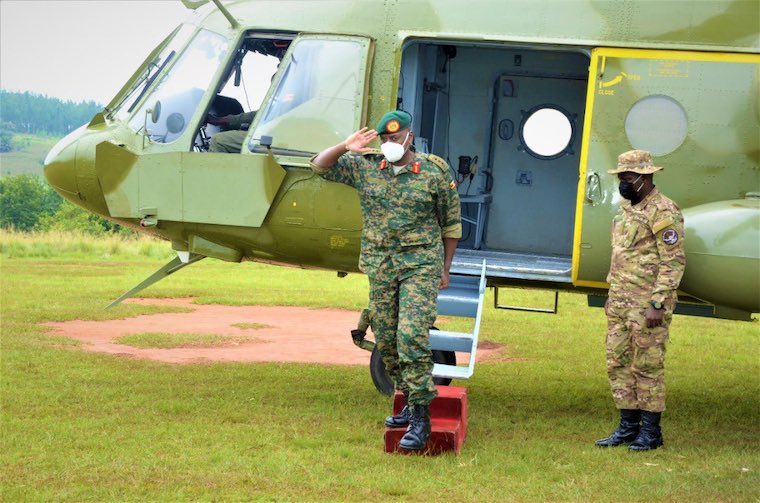 On Tuesday evening, Muhoozi, the commander of the Land Forces tweeted that “majority of mankind (that are non-white) support Russia’s stand in Ukraine”, exclaiming that ”Putin is right!”.

He further added: “When the (USSR) parked Nuclear-armed missiles in Cuba in 1962, the West was ready to blow up the world over it. Now NATO does the same, they expect Russia to do differently”.

The USSR and NATO stand for Unions of Soviet Socialist Republics and the North Atlantic Trade Organizations respectively.

Muhoozi occupies the second-highest military office in Uganda and is the only one who has come out publicly to voice his support for the Russian invasion.

It’s against this background that Henry Okello Oryem, the state minister of Foreign Affairs disowned the statement saying Muhoozi’s statement does not represent the position of the ministry or the country on the Russia-Ukraine war.

The minister added, “What he wrote represented his views as an individual just like the views of other people across the world who are supporting Ukraine on the contrary!”

Oryem clarified that Uganda does not support the act of aggression and that it is Uganda’s position that parties in any conflict must engage in meaningful negotiations to find an amicable solution to a disagreement as opposed to war.

On 24 February, the African Union (AU), a continental union consisting of 55 member states including Uganda, condemned Russian President Vladimir Putin’s decision to declare war against Ukraine, and called for an immediate cease-fire to preserve world peace.

we could be crucifying Muhoozi for nothing when his tweets represent the official position of the Government on Russia.

Otherwise, why do you think Uganda was among the countries that abstained as the United Nations voted for a resolution deploring Russia’s invasion of Ukraine and a call for the immediate withdrawal of its forces on Wednesday.

There is no doubt we support Russia's actions, after all we are in the habit of invading undermining other countries sovereigntyfor the same reasons

In other words Wadada, a person/country that is neutral in a situation of injustice, has chosen the side of the oppressor (Archbishop Desmond Tutu [RIP]).

Tje West did it all and was not being held responsible for any actions it was doing.

Criminal war tribunal in Hague was never implicated Ameroca and NATO for their crimes.But now they want to try Russia.

Russia is doing the right tho g to defend
D itself and those young ones should watch nemeroits Rissoan war movies to see what was happening in Russo
Russia lost 30 million of its people for what?

It cannot be,it cannot happen!
The whole globe will be leveled down to dust and debris.
Respect Russia! To Russia !!
Report to administrator
123