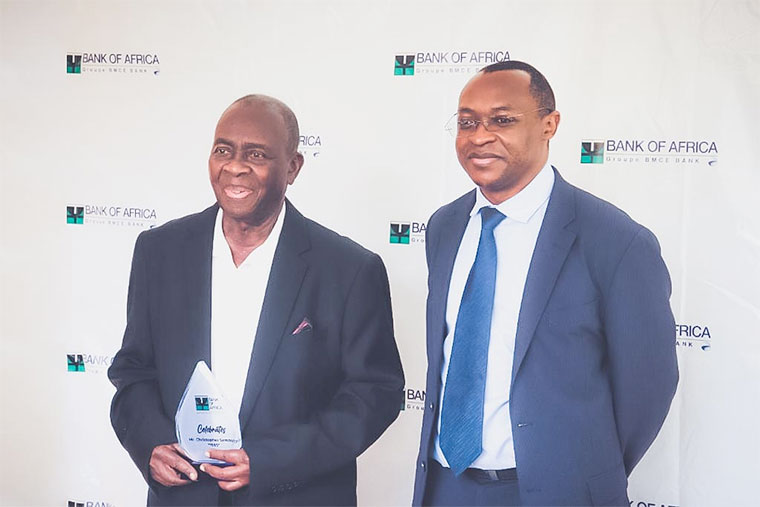 Many mid-aged Ugandans will remember Christopher Sembuya as the co-owner of Sembule Group of Companies and its flagship factory, Sembule Steel Mills. And rightly so, because by the end of the 1990s, it was the leading brand name at East Africa’s industrial stage.

Sembuya (also known as Christopher Columbus) died on Tuesday, January 11 aged 86. At the peak of his entrepreneurial journey, Sembule Group, which Christopher had started with his younger brother. Henry W Buwule (hence the company name “Sembule”), included steel rolling and construction steel production, electronics, and banking, among others.

The two had started out earlier in the 1960s with a shop dealing in building hardware materials, Ndeeba Hardware, in Ndeeba in Rubaga Division, before deciding that they could actually produce nails. The nail factory turned out to be lucrative and helped them register their business as Sembule Industries in 1971, and later Sembule Steel Mills in 1974.

His brother would die 20 years later. Born in 1937, Sembuya studied St. Leo’s secondary school Kyegobe, in Kabarole, and worked in various government postings, including in the ministry of Local Government and in Finance, Planning, and Economic Development. He retired early to concentrate on his businesses.

By the mid-1980s, the group had diversified into electronics, including the production of street-lighting systems and the first Ugandan-made transistor radio, the Sembule radio, which came in brands like “Makula”. Sembule radio also revolutionized the Ugandan airwave by introducing FM technology, which has since largely replaced medium and shortwave broadcasting.

In 1985, a small deposit-taking private company was started in 1991, it was granted a banking license as Sembule Investment Bank, and a fully-fledged commercial bank in 1996. A year later, after securing new investors for the bank, it was renamed Allied Bank International, which later became today’s Bank of Africa Uganda. At the end of the 1990s, Sembuya started Pan World Insurance Company.

A joint venture with a Zimbabwean firm led to the end of Pan World and the birth of Lion Insurance in 2004. In 1992, Sembuya’s company diversified into media, establishing the first private TV channel, Cable International Television, which gave Ugandans access to international broadcasters like CNN and Deutsche Welle (DW).

In 1998, it merged with Wavah Broadcasting to form WBS TV. In what has been widely termed as ‘the consequence of over-investing and failure to manage a huge empire', Sembule had by 2010 accumulated huge debts. By 2014, having failed to secure a government bailout, Sembuya lost Sembule Steel Mills, then valued at Shs 27 billion to a bank that had lent him Shs 10 billion, according to media reports.

His dilemma has always come up as an example of the lack of a government strategy to develop the local industrialists. Since then, and until as recently as 2019, Sembuya was asking the government for a bailout of $5 million (currently Shs 8 billion).

“The government has helped many people including Sudhir (Ruparelia) and Hassan (Basajjabalaba), I don’t know why they have not helped Sembule,” said one of his sons in a recent interview.

“We have lost another giant in the business world Mr Christopher Sembuya. May his soul rest in peace and condolences to the family,” said Dr Maggie Kigozi, the proprietor of Crown Beverages Ltd and former executive director, Uganda Investments Authority.

The banking industry will also remember him for starting what had become the most influential bank at the time. Bank of Africa managing director, Arthur Isiko, said he had the pleasure of meeting Sembuya recently, who in 1985, alongside his late brother, Buwule founded Sembule Investment Bank (SIB), which later became Bank of Africa Uganda.

“We are deeply saddened by the recent loss of one of our founding pillars, who was a trailblazing pioneer and entrepreneur,” said the bank.

Uganda Manufacturers Association (UMA) said they will miss a great industrialist and a founder member of the association who “championed the transformation of Uganda's industrialization.”

“We have learnt, with profound sadness, of the passing on of a titan of industry, Mzee Christopher Sembuya, one half of the dynamic duo behind Sembule Group Ltd. The Group, at its peak, had interests in banking, steel, and consumer electronics. Rest well Mzee Sembuya,” said Daniel Birungi, UMA executive director.

There are also reports that on top of his contribution to the nation’s industrial development, the late Sembuya helped fund the operation of the National Resistance Army before it took over the government in 1986.  Despite this, he didn’t receive a medal of recognition for these contributions.

In one of his writings, Sembuya gave tribute to President Amin for his contributions to the development of the economy, sports, infrastructure, and religion, among others.

“True, the circumstances and the period of Idi Amin were characterized by terror, but that does not have to put away his other side that was a sincere positive contribution to Uganda. Often Amin has been accused of so many wrongs, that any of his right doings always obscured,” said Sembuya in his book, The other side of Idi Amin.

In the book, he cites the creation of Uganda Airlines, the National Textiles Board that ensured the development of the local textile industry, as well as the different marketing boards. He says the privatization of some of the government facilities and companies is to blame for the collapse of these industries.

It was also characteristic of him to encourage people he had interacted with, to venture into private work if they were to make it in point. One of them is engineer Frederick Mubiru, who met Sembuya when Kampala City Council (KCC) gave him a contract for street lighting.

“Since that appointment, we had several meetings on the same issues (resignation and going private). I recall one statement, which was a game-changer. This was, “You will never learn swimming when at the shallow end of the pool." This was when I started to seriously launch in the deep," said Mubiru.

Mubiru later resigned and is now the proprietor of Macro Technics Ltd, a construction company. Some of his former employees include Emanuel Katongole of Quality Chemicals Ltd and Deo Kayemba, the owner of East African Roofings Ltd, among others.

Uganda indeed lost a man who is hard to replace. Rest in eternal peace and may your light that you gave to the world continue enabling many find their own way. RIP!
Report to administrator
12