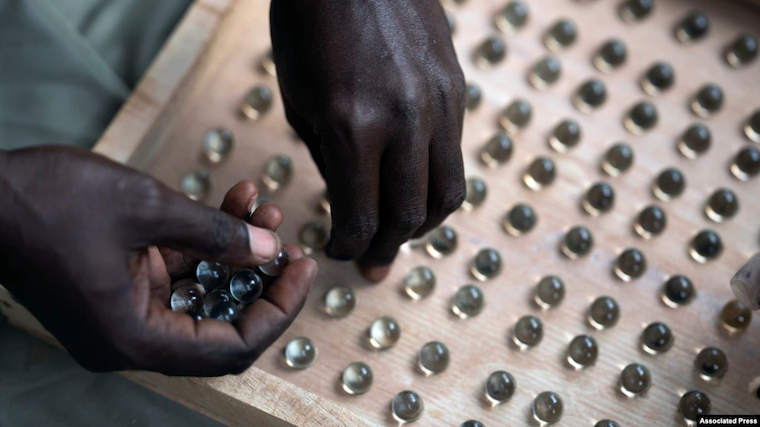 An electoral worker uses a counting board to tally marbles from a polling station during Gambia's presidential election in Serrekunda, Gambia

Election officials started counting marble votes Saturday in Gambia after the polls closed in the country's first presidential election in decades that did not include former dictator Yahya Jammeh, a milestone seen as a test of democracy in the West African country.

Long lines of Gambians came to vote to exercise their democratic rights as demands for justice in the post-Jammeh era rise. Nearly 1 million registered voters were expected to drop marbles into one of six ballot bins, each adorned with the face and name of a candidate.

The candidates include incumbent President Adama Barrow, who defeated Jammeh in 2016 as an opposition leader. Barrow's challengers are former mentor and head opposition leader Ousainou Darboe of the United Democratic Party; Mama Kandeh of Gambia Democratic Congress; Halifa Sallah of the People's Democratic Organization for Independence and Socialism; Abdoulie Ebrima Jammeh of the National Unity Party; and Essa Mbye Faal, former lead counsel of Gambia's truth commission, who was running as an independent.

"We will never lose this election," Barrow said after voting in Banjul. "I am a leader who is focused on development, and that development will continue in this country. I know in the next 24 hours my people will be celebrating in the streets."

Barrow stressed the Independent Electoral Commission must remain impartial. Darboe voted in Fajara, a neighborhood in Bakau, near the capital, using a walker because of health problems. Flanked by a huge escort, including his wives, he added his voice to calls for peaceful elections.

"We all win if there is peaceful election," he said.

Independent Electoral Commission presiding officer Musa Mbye told The Associated Press that there were no major problems during the vote. IEC Chair Alieu Mommar Njie said election results would be announced by Monday.

After polls closed, several officials started the counts by laying the marbles on wooden boards to mark 100 to 200 votes per board. Political party representatives and polling station heads also sign off on the vote count. This year, it will also then be put into an app developed for Gambia's election tracking, aptly called Marble.

All the presidential candidates vowed to strengthen the country's tourism-dependent economy amid the coronavirus pandemic so fewer Gambians feel compelled to travel the dangerous migration route to Europe.

While the 2016 election that removed Jammeh from power after 22 years saw Gambians go from fear to elation, many are still not satisfied with the progress the nation has made.

"Since President Barrow came to power, the prices of food commodities kept rising. The average Gambian lives in poverty, so we want a candidate to be elected to address this problem," Kebba Gaye, 23, said in the town of Wellingara. "We youths want to elect a leader that will respect and value our votes. A leader that will create employment for us."

In a nearby neighborhood, Marietou Bojang, 24, agreed on the need for change, saying people don't have enough to eat.

"I am voting because myself and other women are suffering silently. A bag of rice has drastically gone up," she told the AP, adding that not enough has been done to fight corruption.

Many Gambians want certainty that the new leaders will bring the tiny West African nation of about 2.4 million toward peace and justice.

Jammeh, who seized power in 1994 in a bloodless coup, was voted out of office in 2016. After initially agreeing to step down, Jammeh resisted, and a six-week crisis saw neighboring West African countries prepare to send in troops to stage a military intervention. Jammeh was forced into exile and fled to Equatorial Guinea.

Jammeh's two-decade rule was marked by arbitrary arrests, forced disappearances and summary executions that were revealed through dramatic testimony during Truth, Reconciliation and Reparations Commission hearings that lasted for years.

Last week, the commission handed its 17-volume report to Barrow, urging him to ensure that perpetrators of human rights violations are prosecuted. Barrow said he would do that.

Still, many Gambians feel betrayed after Barrow's National People's Party reached a deal with the top figures of the former ruling party, despite Jammeh's split with that party.

Links to Jammeh are not only an issue for the current president. Opposition candidate Kandeh has been supported by a breakaway political faction that Jammeh formed during his exile in Equatorial Guinea. While Kandeh has kept silent about Jammeh's possible return to Gambia, his allies are unequivocally saying that Jammeh would come back if they emerged victorious from the election.

Of the other candidates, Sallah and Darboe are established politicians, but they faced challenges from newcomers Faal and Ebrima Jammeh, who are making waves in urban areas.