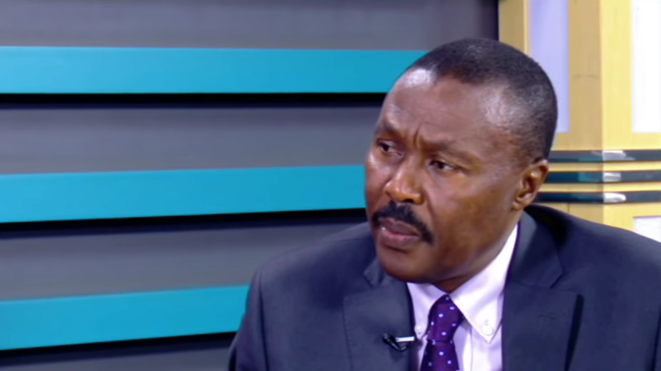 Uganda's longest-ever serving army commander and president of the opposition Alliance for National Transformation (ANT) Gen Mugisha Muntu has implored the Ugandan army operating in the Democratic Republic of Congo (DRC) to avoid looting and instead focus on the mission of fighting ADF rebels.

This week, Uganda and DRC armies launched joint offensive operations against the Allied Democratic Front (ADF) rebel bases in eastern Congo. Uganda accuses ADF of being behind the recent bombings that have rocked the country in recent months and led to the death of nine people and the injury of several others. Now, Gen Muntu urges the Uganda People's Defense Forces (UPDF) not to repeat the unfortunate history made during the first and second Congolese wars.

Uganda participated in the 1996 regional coalition formed to fight Rwandan Hutu rebels and Ugandan rebels operating in DRC and said to be supported by then President of Congo Mobutu Sese Seko. UPDF was found guilty of illegal exploitation of resources from the Congo in what came to be known as military entrepreneurialism. The United Nations (UN) in its report named top military commanders and officers involved in what they called an elite network.

The same accusations emerged against Uganda, Rwanda, and Burundi during the 1998-2003 occupation in the eastern part of Congo in what was known as the second Congolese war. In 2001, another UN report found that while the three countries went to Congo to secure their borders, they conveniently stayed there to steal natural resources.

Congo went to court and in 2005 the International Court of Justice (ICJ) ruled that Uganda violated the sovereignty of DRC by sending its troops there without their consent. Congo demanded reparations of between US $6 billion and $10 billion which the court granted.

The amount has been growing rapidly and is now believed to be around $20 billion. Muntu says the entry of the UPDF into Congo is a double-edged sword, posing a challenge and also an opportunity for UPDF to salvage its image. He says they have to focus on the job and avoid stealing Congo’s resources or engaging in any form of Human Rights violations.

"Because we have a history in Congo and unfortunately, it is an ugly history. The last time UPDF was in Congo its image was really bashed. It literally went down on the ground because of the nature of the commanders who were there, who engaged in looting and all kinds of things. That is the image UPDF got in Congo at that time. There is an opportunity now for those who are in command of UPDF to know that there is an opportunity for UPDF to salvage its image by acting differently," Muntu said.

"Everybody must keep focus on the mission…operate in a manner because fighting against such insurgency is a complex process. They may get there and find that they are embedded within the population. The manner in which they carry out those operations is critical because the whole international press, everybody is going to be focused on that operation. They have to avoid human rights violations of the civilian population there if they want to salvage the image of the UPDF. That is is an opportunity and they can do that if they remain focused on the mission," added Muntu.

The surprise offensive against ADF, government says was agreed upon by the Congo government with which they have been sharing intelligence. Muntu says that it is legitimate for Uganda to go to Congo to protect its interests as a country. He says the government of Congo has for long been unable to establish a robust presence in Eastern Congo to deny any group sanctuary from destabilizing neighbors, Uganda inclusive.

But Muntu says the manner in which Uganda went into Congo without consent from the parliament is irregular and wrong. He says while the UPDF had discussions with the government of Congo, parliament should have been involved.

Muntu says if it was important to have parliament discuss the matter during plenary for security reasons, the two arms of government, the executive and parliament should have devised means to share information but not act without the knowledge of parliament.

"The manner in which the force went is irregular and wrong because while the discussions were held with DR Congo which was right for UPDF to intervene in DRC, Gen Museveni as the commander in chief, and as one who knows the Constitution requires that deployment outside the borders should be discussed and sanctioned by parliament, should have carried out measures of how that had to be done. If it was completely impossible may be to go to plenary, they needed to work out ways how parliament is discussed with - maybe through a committee. They can work out ways, one if the fear is compromising a surprise move for example," Muntu said.

"When there is a government there is executive, there is a parliament, there is the judiciary. If there is any challenge, the arms of government will find ways of resolving a challenge as they solve a problem. But for them to simply deploy and inform later without putting there a mechanism is wrong. But personally, I’m not surprised because that is the nature of Gen Museveni, he wants to do everything himself because how else will have to create a feeling as always that he’s in charge. He can do anything and nothing can happen. That is his nature and I doubt if anything is about to change and therefore it is the responsibility of those who are preparing themselves for government to start doing those things in a manner that is consistent with modern governance," said Muntu.

While addressing the press, Uganda army spokesperson, Brigadier Flavia Byekwaso said they could not involve parliament ahead of the offensive because that would have alerted the rebels they were targeting.

You are always there to.insult spit on and attack our government

This is all you can do and Shame on Observer to give you space to voice these cowardish comments and insult s.
You can do better Observer

Reject all these negatine individuals and their lunatic comments
Report to administrator
0 #12 Akot 2021-12-05 18:16
Kalibbala, thanks.

The sad part is that as Ugandans are powerless tribally divided ruled, the only change will come from another band of thugs/terrorists, who will replace Museveni & his thugs/terrorists!

Just tribal leaders standing down & UNITY are all Ugandans need, to block & show Museveni way out! This will also be saying NO to ADF or any other bandits who will come out to replace Museveni!

Ugandans, not even the Pope has come out to help +70% catholics in the country, yet he takes few migrants even from other religions to safety in Rome, while blaming developed world for the plight of migrants running away from shitholes ruled by demons!...
Report to administrator
0 #13 Akot 2021-12-05 18:23
...The only ones at peace, living so richly are useless rulers/dictators/life time rulers... protected by even church leaders!

Ah! developed world leaders/politicians fight one another instead of ensuring migrants aren't taken in as long as UN is bent on assuring demon rulers posts in shitholes, thus migration!...

Who will ensure change when UN is ensuring those who have the power, through UNITY in their shitholes, to do so are imposed on developed world?

Whi will replace Museveni without ending the tribalistic system & UNITY of Ugandans, other than another band of thugs/terrorists?

UN is supported, financed by even developed world suffocating, at war with themsleves because of migration UN is ensuring never ends!
Report to administrator
0 #14 Akot 2021-12-05 18:38
...Ugandans, look at how J. Biden who blamed
D. Trump for strict emasures taken to block migrants, has now backed down after realising the measures taken by Trump were good, because it was strict!

Once a child gets ONE YES for doing something bad, the next step the kid takes will be worse & will end up controlling the mother, terrorising colleges at school....thus growing up to become a perfect criminal!

Ugandans & developed world MUST wake up, if they want a future!

Yet as it is, UN & developed world, the Pope are making things worse while shitholes rulers just rule for life, thus ensure migration that has become NORMALITY!

Just as Ugandans ensure Museveni's family busines, thus their own enslavement, with the tribalistic system that DISEMPOWERS them completely!
Report to administrator
0 #15 Akot 2021-12-05 18:50
Lysol, thanks.

Central African Republic Mobuto never gage chance to Congolese to know what belonging to their country means! Kabila made it worse & still does by working silently to ensure DRConge is on fire!

Rwandese Kagame & Museveni fought to either own DRCongo or Uganda; now Kagame has Rwanda & Museveni has Uganda!

As the tribalistic system stands, Ugandans are powerless & the only change will come from ADF or another band of thugs/terrorists!

Without ending the tribalistic system & UNITING to make stand, the victimes will always be Ugandans in the zone formed by their tribal lands & WHY?
Report to administrator
0 #16 Akot 2021-12-05 18:57
Ugandans, +35 years on, what are you waiting for: next fake presidential election to legalise/ensure Museveni's 45 years in power, then bolster him immediately with fake parliamentary elections & continue pretending it's democracy?

As it is, it will either be Museveni or ADF, WHY when all that are needed are;

- UNITY to block Museveni or any terror group?

Why have Ugandans surrendered to be slaves terrorised in the country formed by their tribal lands?
Report to administrator
0 #17 Lakwena 2021-12-06 07:33
Quoting WADADA rogers:

Muntu, one day you will die from your desire to be straight and in so doing you think every one is straight.

The main agenda for going into DRC is to steal gold and timber. Rape is the second, justifying an inflated security budget is the third while destroying ADF hide outs must be like the 10th on the agenda.

In other words WADADA, for our Problem of Africa, Ssebalwanyi (the King of Conflict and Bloodshed) the ADF after LRA. is functional (a blessing): Hence the lamest justification and opportunity to PLUNDER our Coffers and DR Congo.
Report to administrator
12