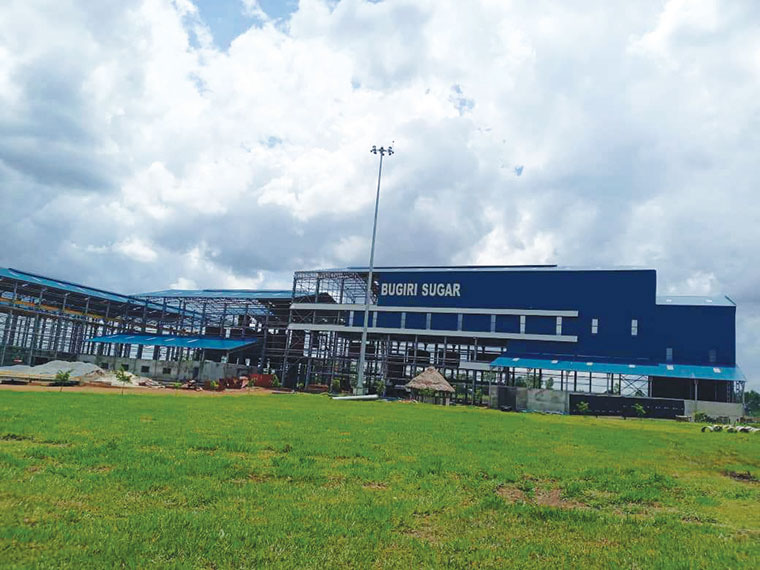 A protracted legal battle that has pitted two sugar factories in the Busoga sub-region is set to add further pressure to the already dwindling export revenues that Uganda was earning from the export of sugar, DERRICK KIYONGA writes.

In the end, justice Anna Bitature Mugenyi of the High court’s commercial division was left with no option but to fine the directors of Kamuli Sugar Limited Shs 150 million for being in contempt of a court order that had stopped them from inspecting bank accounts of the directors of the recently-formed Bugiri Sugar Works Limited, found in the eastern town of Bugiri.

Bugiri Sugar Works Limited intends to start production of sugar by the end of this year, a move that will lead to fierce competition for out-growers in the Busoga sub-region, where all these factories are domiciled.

Although there were other sugar factories in Busoga, the emergence of Bugiri Sugar Works Limited into the market seems to have unsettled many in the sector and particularly the directors of Kamuli Sugar Works Limited, who have resorted to courts where they have filed a litany of applications, which, at times, they have hastily withdrawn.

For instance, court records show that on May 3, Dilipkumar, Magan, Gauravkumar and Dhara, the owners of the three sugar companies opposing Bugiri Sugar Works Limited, filed an application at the Commercial court against their archrivals. The case was allocated to Justice Susan Abinyo, known in the legal circles for taking no prisoners while handling cases.

That day, Kamuli Sugar Works Limited directors, quietly withdrew the case and filed it again the following day on May, 4, but still it was assigned to the same judge: Abinyo.

Again, court records show they withdrew the case and, without making any changes, filed it at the High court on May 11, in Jinja city.

“The above fillings and withdraws were all because the plaintiffs were looking for a particular judicial officer to hear their case. They had failed to have the same in the Commercial court hence they went to Jinja. This is the first instance of the abuse of court process by a litigant,” Bugiri Sugar Works Limited directors would later tell the Commercial court.

In all these applications, the objective by the directors of Kamuli Sugar Limited was one: they wanted to inspect and get copies of bank accounts belonging to the directors of Bugiri Sugar which they claimed are in Bank of Baroda, Dfcu and NCBA banks.

On May 11, the day Kamuli Sugar directors filed the application, court documents show that Fred Waninda, the Jinja High court registrar, proceeded ex parte (without the respondents) and issued an order allowing the Kamuli directors to inspect and take copies of Bugiri Sugar directors’ accounts.

“An interim injunction order doth issue restraining Bank of Baroda, Dfcu Bank Limited, and NCBA Bank Limited from complying with the orders in H.C.M.A [High Court Miscellaneous Application] 76 of 2021 until the hearing and final disposal of the main application which is fixed for hearing on the 21st May, 202I,” Waninda ruled.

For contempt of court to exist, Justice Mugenyi said there must be a lawful court order, and potential contemnor must have been aware of the court order and failed to comply or simply disobeyed the same.

When the case came up for submissions on October 20, 2021, Henry Nyegenya, the lawyer representing Kamuli Sugar directors, insisted how his clients had no blemish at all since, according to him, there was no lawful order because his clients were not given a fair hearing when Waninda was stopping inspection of the bank accounts. This submission rubbed Justice Mugenyi the wrong way.

“Not only did the counsel for the respondents [Nyegenya] fail to avail a record of the court of proceedings to show his clients had not been given an opportunity to be heard, yet himself and counsel [James] Nangwala for the respondents were indicated as present in court in the said order,” justice Mugenyi ruled, adding, “ but also failed  to adduce evidence the said order no longer had the force of law having been set aside, stayed or reviewed as a result of any application filed by themselves.”

The record of proceedings from the Jinja court that Justice Mugenyi perused confirmed that the lawyers representing Kamuli Sugar made submissions before Waninda on May 14, 2021, at 3 pm after which the order was made at 4: 28pm and that the same order was still intact when the lawyers went before her on October 20, 2021.

Justice Mugenyi said the submissions by Kamuli Sugar directors that the order stopping the inspections of accounts was unlawful because they were not given a fair hearing was “too far-fetched” and “misleading.”

The judge pointed out that in his submissions, Nyegenya (the respondent) had referred to the letter dated May 15, 2021, from Bank of Baroda in which its head of the Jinja branch indicated that they had complied with the court order of May 11, 2021, and handed over the bank documents to Kamuli Sugar directors on May 14, 2021, at 5:30 pm.

On October 21, a day after Mugenyi had heard the contempt application, lawyers representing Kamuli Sugar directors, further annoyed the judge when they supplied her court with another document, which purportedly had been issued by Bank of Baroda indicating that bank statements were received by their clients on May 14, 2021.

“Needless to say, the conduct of counsel for the respondents [ Kamuli Sugar directors] mentioned above is not only disrespectful of this court, but also in blatant disregard of due press and counsel who irregularly/ illegally smuggled the said document into court in the manner in which they did and did not even bother to copy counsel for the applicants...” Mugenyi said.

Mugenyi who awarded costs to Bugiri Sugar directors added: “The presentation of two different documents containing conflicting information by the respondents themselves only serves to emphasize the fallaciousness with which the respondents and their counsel have handled this matter as will be seen later in this ruling. This court will not entertain such unprofessional behaviour and the smuggled document is disregarded with all the contempt it deserves.”

The Kamuli Sugar directors do not want Bugiri Sugar Works Limited to start operations because they say they signed a Confidential Release and Settlement Agreement (CRSA) with six of its directors, which agreement they say stopped them from engaging in the sugar business.

The colossal sum paid under the Confidential and Release Settlement Agreement (CRSA) and under the consent judgment was effected in consideration of the unequivocal undertaking of the Bugiri Sugar Works directors whether directly or indirectly or by any of their assignees or proxies not to engage in any sugar business within the agreed period of five years..,” court documents Kamuli directors filed read.

They insist that contrary to the CRSA, the six directors have been indirectly facilitating the establishment of Bugiri Sugar Works Limited by investing in large sums of money and acquiring interest therein for purposes of dealing in the business of manufacturing and selling sugar products in Uganda.

In response, Bugiri Sugar directors in several court documents have insisted that the CRSA their rivals are clutching on can’t stand since on March 18, 2020, the parties substituted it by an agreement entitled “Release and Settlement Agreement “shortened as RSA. The RSA, according to Bugiri Sugar directors, doesn’t contain any non-complete clause or other provision which restrains trade.

“The effect of the RSA was to abrogate, substitute, rescind, supersede and extinguish the CSRA… particularly with a completely new, self-sustaining and self-subsisting agreement.”

The CRSA is illegal, Bugiri Sugar directors say. They added that the government of Uganda has published the Uganda National Industrial Policy (NIP) with a stated objective of promoting ‘a competitive’ industrial sector and has identified the sugar industry as one with the highest impact for employment, import replacement and exports.

Bugiri Sugar directors assert that they have been licensed by Uganda Investment Authority (UIA) to inject about $16 million into this sugar factory.

These lot are just here to engender 'slavery' (as sugar growing has been known for centuries) and 'squirreling' away the proceeds abroad. Idi will be turning in his grave as we speak.
Report to administrator