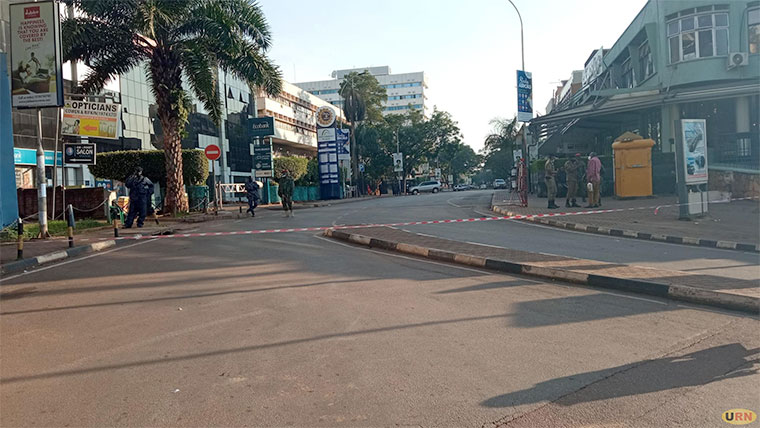 One of the bombs went off at Kampala Central Police Station (CPS), Kampala along Buganda road while the second went off at Raja Chambers and Jubilee Insurance Building along Parliamentary Avenue.

When URN visited the area today Wednesday, security personnel had cordoned off part of Parliamentary Avenue from the National Theatre.

The spokesperson of Prisons Frank Baine says their offices are only accessible to staff with identity cards.

"We don't know when those who have cordoned off the area shall permit the public to enter. We are still waiting," said Baine.

Simon Jamba, the spokesperson of ministry of Justice and Constitutional Affairs says that they were advised to close to the public until investigations at the crime scene are completed.

The Inspector of General of Government office at Jubilee House is also closed to both staff and the public. Ali Munira, the spokesperson of the Inspectorate of Government says that they were ordered to close as investigations continue.

"No one can access it because it's a scene of the crime. The police are there doing their work, they shall advise us. We are still recovering from the incident, we haven't met yet, security will guide us," said Munira.

KCCA offices, clinic, public library and City Hall court were also closed until further notice. Although KCCA is not within the cordoned-off area, KCCA spokesperson Juliet Bukirwa Muwanguzi says they were advised to close.

"We shall not be opening today, we were advised to close and so we are still waiting for further guidance," said Bukirwa.

Kampala Metropolitan deputy police spokesperson, Luke Owoyesigyire says security is still carrying out investigations at the scene. He says that the police shall communicate when the road will be reopened and offices accessible to the public.

+1 #1 Wainanchi 2021-11-18 09:09
Good security cordon off.
These are government institutions and no need for visitors to come into the compound

I would like to see downtown Kampala streets patrolled and supervised by mobile police patrols and LDU personekl with orders to shoot and kill dangerous terrorists on the spotBetter them not to hurt us.
Piga pigaa!!
Report to administrator