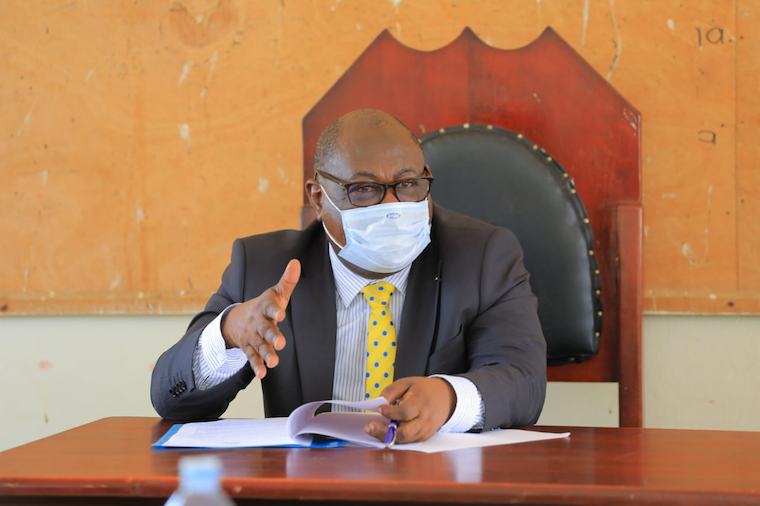 The long-shelved Constitutional Land Amendment Bill, which drew plenty of controversy and outrage at its first introduction in 2016, is making its way back to parliament,  Sam Mayanja, the minister of state for Lands, has said.

Asked about the Bill last week, Mayanja, who has been harshly criticized for amplifying tensions in Buganda by seizing on the divisive issue of Mailo land and calling for its abolition, said; “Now, it’s coming …I think the ministry has finalized its stage, it’s now going to the cabinet stage, yes.”

That draft legislation, if passed then, would have allowed the government to use disputed land as the owner sought redress in a court of law.

The Bill, which was tabled in parliament in 2016, drew harsh criticism from opposition politicians, and civil society leaders. They claimed the government wanted to use the law to deprive people of their constitutional right to own property.

The government argued then that the law was meant to resolve the problem of delayed implementation of government projects like power dams, and roads due to disputes arising from the land acquisition process.

Rukutana withdrew the Bill then and said the government would consult more on the issue. The term of the 10th parliament expired without the Bill returning to parliament.

However, last Friday at Speke Resort Munyonyo, Mayanja told a meeting, which discussed the status of land reforms in Uganda, that the lack of the law has deprived the government of the right to develop infrastructure.

The Oxfam-organized meeting was attended by the Uganda Parliamentary Alliance on Food and Nutrition Security. In his speech on The status of the law on compulsory land acquisition vis a vis large-scale land-based investments, Mayanja said, “Compulsory land acquisition refers to the process by which the Government of Uganda acquires land from private persons in the interest of the public.”

“Therefore, the status of the law is that compensation must not only be fair but must be adequate. However, the ministry is still facing a challenge from landowners who reject the valuation by the Chief Government Valuer, which has resulted in halting essential projects and litigation.”

He said section 7 of the Land Acquisition Act Cap 226 provides for the acquisition of land according to the provisions of that Act. However, the section allows the assessment officer to take possession of land without prior compensation if the minister certifies that it is in the public interest for him or her to do so.”

It should be noted that article 237 allows for compulsory compensation subject to article 26 of the Constitution, he said.

“One of the requirements for land acquisition in article 26 is prior compensation before acquisition. However, the Land

Acquisition Act does not provide for mandatory prior compensation before the acquisition,” he said.

“Article 2(2) provides that the constitution is the supreme law of the land and no statutory provision in any enactment inconsistent therewith can supersede the provisions of the Constitution. It follows, therefore, that for any compulsory acquisition of land to be valid; such acquisition must be within the confines of Article 26(2) of the Constitution,” he said.

“The legality of section 7 of the Land Acquisition Act was challenged in the case of Advocates for Natural Resources, Irumba Asumani and Others v Attorney General, where the Constitutional court held that S.7 of the Land Acquisition Act is inconsistent with and contravenes Article 26. The provision was nullified to the extent of its inconsistency that is as it does not provide for prior payment of compensation before government compulsorily acquires or takes possession of any person’s property. It was further emphasized that judicial bodies should construe old laws that predate the 1995 Constitution in conformity with Article 274,” he said.

However, of great importance regarding this matter is the Supreme Court’s judgment on appeal in UNRA v Irumba Asumani where the court confirmed the decision of the Constitutional Court and held that S.7(1) of the Land Acquisition Act was inconsistent with article 26 of the Constitution as it allowed the government to compulsorily acquire land without prior compensation, he said, adding, “The Court went on to hold that whereas Article 26 is not among the non-derogable rights stated under article 44, this does not give powers to government to compulsorily acquire people’s land without prior payment and that such planned government projects do not fall under the exceptions of disasters and emergencies.”

“The ruling of the Supreme Court has made it clear the right to own property is absolute save in instances of disasters, calamities and emergencies. Those are the only limits court qualified to be the exceptions where someone can be deprived of their property without prior compensation. However, in the case of compulsory land acquisition that does not fall within the stated exemptions, compensation must be prior. The Constitution provides for the reasons for compulsory land acquisition,” he said.

He said, “Whereas land belongs to Ugandans, the government also needs land for socio-economic development. The government needs land to give to investors who will carry out job creation projects. The discovery of oil in the Albertine region has necessitated the need for land for exploration and production of oil, not forgetting the need for land through which the oil pipeline is to pass via Tanzania.”

The development of large infrastructure projects may often entail land intake, the involuntary resettlement of affected persons, and the compulsory acquisition of land. As government, we agree that compensation is therefore inevitable for project-affected persons. We are aware that the majority of Ugandans depend on land for their survival as it is always and in some cases the only, source of livelihood,” he said.

“However, the acquisition of land for large-scale investments has been a challenge to the government. The requirement of the law for prior fair and adequate compensation as explained above has resulted in high costs for the implementation of government’s infrastructure and investment projects. As a result, there has been a project delay in cases where an affected person rejects compensation and resorts to court,” he said.

The delayed government infrastructure and investment projects due to disputes arising from compulsory land acquisition processes cause government significant financial loss as a result of penalties from contractors for redundant machinery as well as loss in terms of litigation of the resultant court disputes thus causing financial loss to both government and contractor, he said.

“Graft, gross corruption, greed, incompetence, and collusion have tainted land acquisitions relating to public infrastructure. This is evidenced by the exaggerated compensation and collusion between landowners and project managers. There have been various instances where colossal sums of money were dubiously paid yet genuine claimants are left unpaid. For example, the case in Buwama, Masaka road, where power transmission pylons were constructed over a swamp. Initial inquiries showed that the land was public. After the pylons were constructed, a mysterious owner showed up claiming billions. He even produced a brand new land title and was compensated in unclear circumstances,” he said.

“Another example is the case in Mbarara where power transmission pylons were being constructed via a rural dairy farm. The owner of the farm, a well-connected man, stopped the construction and presented an outrageous claim that the high- voltage power lines would affect his cows and reduce milk production. The Electricity Regulatory Authority purchased the land at 900 million shillings for land which did not exceed five acres and yet the cows are still grazing on this same land,” he said.

Interviewed on the sidelines of the meeting, minister Mayanja addressed a range of issues.

How much of a problem is it to compensate before starting on a project?

The moment you sign these papers with the World Bank or our development partners, you need to start agreeing. You are penalized for time spent without using that money. So, when the project has stalled due to lack of consent or compensation, the problem becomes so complicated.

The constitution provides for prior adequate compensation, before taking over land and that is a problem. And the first valuation of the compensation amount is by the government. Now when the owner of the land rejects that amount, the next stage is litigation and you know how long litigation takes in our courts.

And for as long as that litigation takes place, the project is stalled. World Bank’s conditionality and other development partners’ conditionality is that the project cannot begin until everybody is compensated. So, that is where the problem is and can only be solved by a constitutional amendment where that article is relaxed.

And once money has been agreed by the chief government valuer, taking into account all the best evaluation practices, then that amount is deposited in court and the landowner can go to court and litigate as long as possible and when he succeeds then a top-up will be late.

So, when do we expect to look at the Bill?

It is very urgent. It is on the agenda for this parliament and we are working on it. It is very, very urgent. The stalled projects must proceed. You can’t force the court system; it is constitutional. For example, if there is a constitutional matter in court, all other cases must stop but not so with compensation.

Compensation may take five or so years in court. So, it is very urgent that this matter is handled and it’s on the agenda for this [11th] Parliament.

How soon should we expect the amendments to the land Act?

They are also urgent, very urgent because of the rampant land evictions and it’s on the agenda for this parliament but you know the process is long…it starts with the ministry, it goes through the cabinet memorandum, cabinet’s input, it goes to the party, eventually the caucus, to the first reading in parliament, second reading to the third reading. The process is long but it has been started.

At what stage is it?

Now it’s coming to … I think the ministry has finalized its stage, it’s now going to the cabinet stage.

He was actually given this position because he is a Muganda
Report to administrator
0 #2 M!K! 2021-11-18 21:14
There will be no land for future Baganda generations.

And this is a recipe for strife and instability in the country during the coming years.
Report to administrator