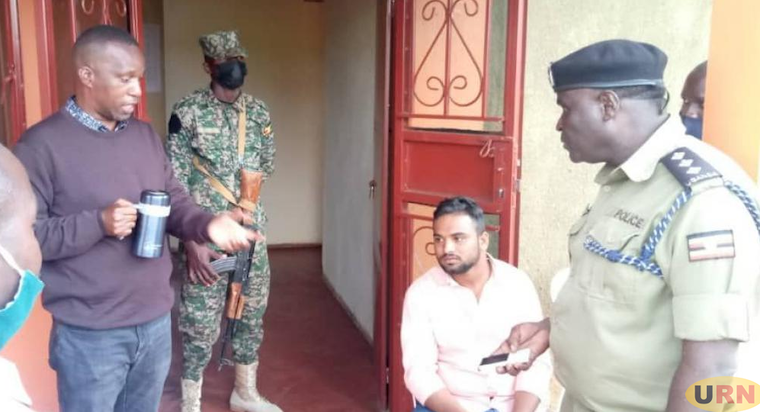 Police in Kikuube district is holding a 23-year-old Pakistani national who was found inside Hoima Sugar factory premises under unclear circumstances.

The suspect holding a Pakistan passport has been identified as Ali Asim, a student at Rise and Shine secondary school Ntinda in Kampala.

Denis Ongom, the human resource manager Hoima Sugar said that Asim on Wednesday gained entry into the factory after posing as an expert and that while inside, he toured all the departments without being asked anything. The staff later became suspicious and tasked him to identify himself.

They realized that he was not a worker attached to the factory, which prompted them to alert security personnel who immediately swung into action and arrested him.

He was immediately whisked to Kikuube central police station for further interrogations. Amlan Tumusiime, Kikuube resident district commissioner (RDC) questioned Asim over how he gained entry into the factory premises and how he came to the district.

Asim claimed that he traveled with his uncle from Kampala by taxi and spent a night in Hoima city and later headed to Hoima Sugar factory premises using a boda boda. Asim, is said to have been in the company of another person who has since gone on the run.

He claimed that his uncle whose names could not be revealed was in Kikuube district but he didn’t know where exactly he was.

Julius Hakiza, the Albertine region police spokesperson says they have detained Asim and have launched investigations to ascertain how he entered into the district.

The hunt for his accomplice who is currently on the run is also ongoing according to Hakiza. Uganda is on high alert following the two separate bomb attacks at Komamboga and Lungala where two people lost their lives.

+2 #1 Zaitun 2021-10-28 17:32
Remeber that Ugandans were terrorised by and later ruled by gun wielding terrorists claiming to be Ugandans.

But now, we are regreting the consequences of having aided those gun-wielding men, who have looted, destroyed the country beyond recognition!

So this ka-Pakistan would like to, I suppose, try his luck to wage a war of liberation while copying his generous benefector who has given him a new country to occupy without much resistance from Ugandans.

Yes, Uganda is a country where any man coming from anywhere (from within or from yonder), any country... can wake up and start a war and then take over power to the benefit of his family members.

How did you go so low like this, my country that was once envied by many a man?

When shall we wake up Ugandans to understand that any simpleton wielding a gun, pretending to be from this country, as has been already, is capable of taking us hostage and make us suffer for decades?
Enough is enough!!!
Report to administrator
+2 #2 DANNY 2021-10-28 19:47
A 23 year old school student ! Must be one of Museveni's investors.
Report to administrator
+1 #3 Mubiru 2021-10-29 18:21
Museveni's ministers and cronies stop the tired bleating of peaceful Uganda.

Uganda is a den of criminals who come to exploit the corrupt system like that fugitive. Passports are corruptly issued to international gangsters based in Uganda to sell drugs abroad.

MUSEVENI's thieves benefit by inflating refugee figures for which Uganda receives billions of international funds as they got in AIDS funds which made ministers and connected robbers billionaires.

Unlike Uganda which benefits from criminals pausing as refugees UK is wasting billions to economic refugees from the world claiming persecution.

Ugandans who lived in Namuwongo shanties sleep in free beautiful accommodation with several benefits including free education for countles children.

People over 80 yrs claim persecution by Museveni when the Sobbis and other murderers only go for youth. UK is flooded by millions escaping poverty. Those born crawling and the over 90s are riding free mobility vehicles.
Report to administrator