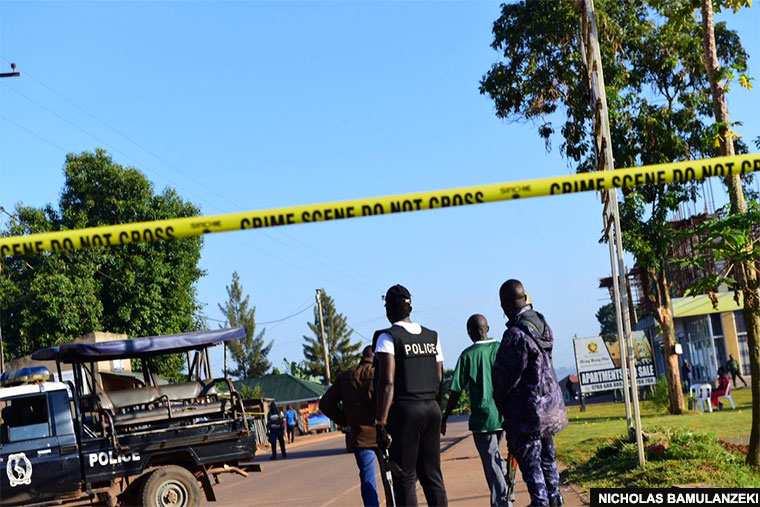 Police officers at the scene of the explosion

On Saturday at about 9.00 pm, an explosion went off at Georon, a small eatery next to the famous Digida pork joint, killing a waitress Emily Nyineneza and injuring three others; Rose Nakitto, Annet Kiconco, and Peter Ssengozi.

Terror group,  Islamic State (IS) has since claimed responsibility for the attack, saying its members detonated the bomb in a bar where "members and spies of the Crusader Ugandan government were gathering."

Following the explosion, on Sunday, Tanui convened a security meeting with residents at Komamboga playground - just a few meters from the crime scene. Tanui who vowed to apprehend all curfew violators in Kampala, faulted the area police officers and their commanders for looking on as people continuously violate curfew regulations.

“The directives are very clear, no one should be in the bar or any place past 7:00 pm. But because of reluctant officers, these places were open. Now they will start giving excuses on this and that. But this unwillingness is very unacceptable in police," said Tanui.

Noah Mukasa Sserumaga, chairperson Central Zone-Komamboga reported to Tanui that the area where the explosion went off from, has more than 10 bars that operate past curfew time without any interruption. He claims that even police officers at Komamboga police post always find difficulty in enforcing curfew at these places since some of them are reportedly owned and managed by their high-ranking security officers.

Kawempe Division mayor Emmanuel Sserunjogi called on police to beef up intelligence between police and locals that can lead to the arrest and closure of places that are still defying the curfew. Sserunjogi appealed to police to improve on community policing which he believes will help in fighting such acts.

Sources however indicate that some police commanders in Kampala Metropolitan North have been arrested in relation to the blast in Komamboga. But police spokesperson Fred Enanga could not confirm or deny the arrests.

“I cannot confirm any arrest of our territorial commanders, but when we have such an incident, we do review and evaluate circumstances. We look at our security posture, and then the response of our teams, but all this is under review by competent teams and if there is any arrest we shall be communicating to the public," said Enanga.

-4 #1 Wainanchi 2021-10-25 12:00
The pigs have spoken.They will be exterminated Guaranteed. But when they are caught nonone should ask for mercy

We should choose one big tree in Uganda and gsbfd them for everyone to see when they poke their tongues out of their sheety mouths.

Uganda military go.gry them and hang them.
Report to administrator
+2 #2 kabayekka 2021-10-25 14:32
There we go again. Instead of blaming an increase of the COVID19 pandemic cases as the cause of a strict curfew lockdown, the Uganda authority is now saying clearly that the curfew is officially on because of the threat of terrorism.

Already the Terror group, Islamic State (IS) has since claimed responsibility for the attack, saying its members detonated the bomb in a bar where "members and spies of the Crusader Ugandan government were gathering."

It is very unfortunate that now the government of Uganda is fighting two very deadly enemies on the frontline.

What if the brutal bombers turn around and start bombing the city of Kampala during the daytime? Indeed Uganda as an African military ruled country is becoming a very risky place to live in!
Report to administrator