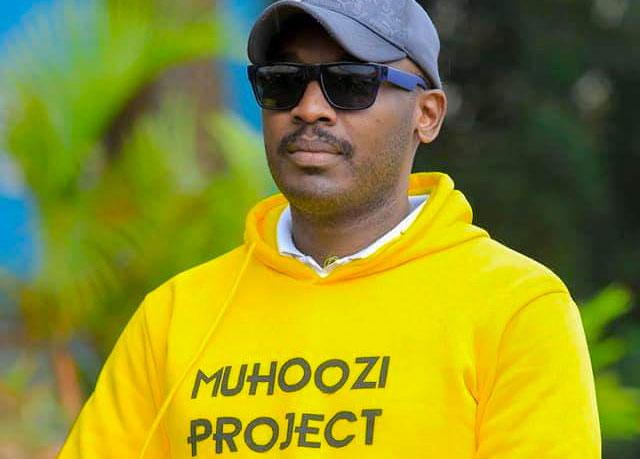 KAMPALA – The taste for the trappings of power has become a noticeable subplot among an adoring crowd of Lt. Gen Muhoozi Kainerugaba’s supporters.

An army of loyalists is helping whip up the presidential ambition of the First Son, who is yet to express interest in replacing his father Yoweri Museveni as president of Uganda. The general’s loyalists have launched an aggressive social media campaign for a 2026 presidential bid for Muhoozi hardly six months into President Museveni’s new term.

Lt. Gen Muhoozi is many things to his legion of youthful supporters –he is the next president, he is presidential material, chairman MK, Gen Muhoozi my role model. All these and many other credentials are boldly inscribed on branded T-shirts, jumpers, caps, shirts and posters printed, distributed and worn by his legion of supporters –loudly touting Muhoozi’s leadership prowess.

A bold poster has been printed and proclaims, “For peace, unity, transparency and supersonic development, vote President Muhoozi Kainerugaba 2026-2031.”

After eight quiet years, the campaign and campaigners for the Muhoozi project are finally striding out of the closet since the former coordinator of Intelligence Services General David Sejusa kicked up a national storm in April 2013 when he claimed that there was a plot to assassinate senior government officials opposed to the Muhoozi presidency.

In his missive published in Daily Monitor, Sejusa claimed there was a ploy by President Museveni to catapult his son into the presidency when he leaves power by strategically recruiting him into the army and making him commander of the presidential guard brigade now the Special Forces Command.

Muhoozi has been accused severally of assembling a team of his trusted lieutenants under SFC, a force charged with securing the presidency and major government installations like the oil fields. The campaigners have now stepped onto the national stage.

The key promoters include young parliamentarians led by David Kabanda and businessman Balaam Barugahara. In universities, the Muhoozi project WhatsApp groups have been created. Muhoozi-leaning university leaders are nudged to spread the word and promote the general’s 2026 candidature among students.

These leaders also identify young and vibrant leaders allied to Muhoozi who can be supported during guild elections. In return, these university students have been promised jobs in the military.

Interviewed for this story, Balaam said the Muhoozi project is the best gift for Uganda because the first son was born into a wealthy family and so he is not into accumulating material things like most African leaders from poor backgrounds. Muhoozi, he said, is so different from sons of ministers in the South Sudan government who are leading luxurious lifestyles in Kampala.

“…Afande Muhoozi left the comfort of his home to join the army…” he said.

To Balaam, if Museveni has done great things for Uganda, then Muhoozi will do more since he has been mentored by Rwanda’s President Paul Kagame, former Security minister General Elly Tumwine and Museveni’s younger brother General Salim Saleh.

Balaam said supporters of Muhoozi are urging him to retire from the army and serve Uganda in another capacity. Asked whether the Muhoozi project promoters got the nod of approval from his father, General Museveni, Balaam said they don’t need the president’s approval to front Muhoozi’s 2026 presidential bid. He said Muhoozi gave the green light.

“... If Museveni is still capable by 2026, we will back him till the right time Muhoozi succeeds the father…” he said.

Promotion of Muhoozi’s presidency is done mostly through WhatsApp and Twitter. His visibility on social media has been elevated by different opinion leaders with an extensive social media following.

On Twitter, journalist Andrew Mwenda has 412,000, Balaam is followed by 8,000 people, Muhoozi has 371,000 followers and Kasambya County legislator David Kabanda has 21,000 followers.

According to the September 2021 population growth projections by Uganda Bureau of Statistics, an average Ugandan shall be aged between 22-26 years by 2026 –the age synonymous with unregulated consumption of social media content.

Recent statistics from a survey done by Twaweza show social media as the main source of information for 4.3% of youths aged between 18-24 years and a similar number for those with higher education estimated at 3.9%. Uganda’s predominantly youthful population shall be casting their first vote in 2026.

On August 27 2021, Muhoozi tweeted a photo of Mwenda dressed in a shirt with an imprint of Muhoozi’s face captioned “The Leader.” In his response tweet, Muhoozi said, “my friend and brother Mwenda never looked smarter than this. Finally he has good taste in his dress code.”

Announcing General Muhoozi as the next president of Uganda in 2026, Charles Lwanga tweeted photos of Balaam, Kabanda and other ladies dressed in Muhoozi-branded shirts and jumpers. The tweet attracted 39 retweets and 131 likes.

John Kayumba, an NRM politician and a member of Team MK (Muhoozi Kainerugaba), tweeted a photo of Muhoozi, Kabanda in conversation with an old gentleman. Muhoozi was doing all the listening. And the caption said, “of all the leadership skills that Muhoozi possesses, listening is the most valuable one understood by a few.”

On September 1, 2021, Phionah Mupenzi announced on Twitter that General Muhoozi would be running for president in 2026.

She requested those who would vote for him to type yes #mk2026 and those who wouldn’t to like the tweet. That tweet attracted 761 likes, 19 quoted tweets, 150 retweets and 100 comments.

Engagements on the accounts whipping up Muhoozi’s 2026 presidency were opened from October 2020 upwards. It seems there are coordinated accounts retweeting anything about Muhoozi’s presidency.

On September 20, 2021, Balaam tweeted thanking the president, General Saleh and Muhoozi for placing the right people in the ministry of Finance after his investment application had been approved within five days. Responding to Balaam’s tweet, Timothy Kalyegira said those tagged in the tweet were the president, defacto vice president and prime minister.

Among the trio, Muhoozi shall be aged 52 while Saleh and Museveni will be too old with less grip on power by 2026. Although Muhoozi has not come out to voice his interest in the top seat, some NRM members are not amused.

Speaking on condition of anonymity, a youthful member of the NRM’s Central Executive Committee said the party currently has a newly elected president whose manifesto has to be implemented. He said members pushing the Muhoozi project are not endorsed by the ruling party and neither do their ambitions align with the future prospects of the NRM.

Though tongue in cheek, Njala was alluding to the Muhoozi project. In an October 1, 2021 press statement and video, Odrek Rwabwogo distanced himself from any presidential campaign.

“…anyone who falsely or deliberately positions me in this angling and elbowing for positions really insults both our intelligence and work we do…” Rwabwogo said.

Muhoozi, however, continues to be a charitable individual. When the national basketball team was financially constrained during the Afro basketball competitions in Rwanda, Muhoozi reportedly bailed the team out with Shs 188 million. In a September 3, 2021 tweet, the National Basketball team president Nasser Sserunjogi said Muhoozi personally gave the team money to settle all the outstanding bills.

The first reaction to the tweet was a photo of Kasambya County MP David Kabanda dressed in a shirt with an inscription “... GENERAL KAINERUGABA MUHOOZI IS MY ROLE MODEL, WHAT ABOUT YOU?”

Interviewed for this story, Mathias Mpuuga, the leader of Opposition in Parliament, said; “…He [Muhoozi] is a man that has not shown any empathy towards the killings happening in Karamoja and Masaka. Whether he is into a project of self-aggrandizement or not, that is his business! My only interest as the leader of opposition is to see that Uganda is democratized. If he is going to be part of the problem, we shall fight him since he now thinks the presidency is hereditary…”

General Kahinda Otafiire has also weighed in on a Muhoozi presidency. Appearing on NBS Frontline, the minister of Internal Affairs said, “…if you think that Muhoozi is not fit to be president, tell your area MP to move a motion that can block him but as far as I know, he is eligible to be a leader on whatever level. There’s no law that forbids him from contesting for presidency in any coming election cycle because he has all what is needed to appear on the ballot paper…”

In an interview with France 24, Museveni denied grooming his son to succeed him. Museveni said Ugandans will choose whoever they want to be president. Despite the downplay by President Museveni, the Muhoozi project seems to be taking shape eight years down the road since the Sejusa missive appeared in the media.

Five years ago, Muhoozi dismissed the alleged Muhoozi project saying he was comfortable serving in the military. “…I do not have the intentions to be president. I am very happy serving the military and it is where I intend to stay for some time…”

Which peace? I do not believe that it is the military pushing the golden boy but rather everything has been hatched by the diamont father, Museveni.

We should know that:

1. Having been in power for over a generation, given the the wondeful distruction caused in the country- Banks, parastatals sold or liquidated or sold at a give-away prices to friends, while health, eductaion have become a history, they now fear;

3. they fear finding all what they stole seized by a freely and democratically elected people's government while finding themselves condemned to pass the rest of their lives in prison.

4. They are now started worrying about all the killings they effected all over the country not forgetting what they did in Congo- killings, looting of hard wood and minerals.

They simply want the son to come in as a family savior!!
Report to administrator
0 #22 Wainanchi 2021-10-14 23:45
My message to Afande General Muhoozi .
Afande, the reason Uganda wants and needs you is exactly as you put forward.

Peace,stability,unity ,progress.The forces of evil and destruction must bevdefeated and eliminated from Uganda.

We appeal to you Afande general, to crush with gallant Ugabda People's Defense Force any attempts to destabilize Uganda and to break it up.MayGod Almighty help Uganda to keep its peace and progress
General Muhoozi oyeeeeee,oyeeeeee!!
Report to administrator
-1 #23 Wainanchi 2021-10-15 00:31
@Zaitun- You must be sick in your head.

You are talking rubbish and nonsense.

Latest news on corona fallouts is brain damage and mental deseases.! Please see nearest specialist to check your state of health They say that people who contracted virus have dangerous sideeffects .
I wish you well and hope you will be Ok!
Report to administrator
0 #24 Wainanchi 2021-10-16 18:52
@ Kasese...You lied to our esteemed readers
Jomo Kenyatta was true father of Mzee Uhuru Kenyatta.

Now why he didnot immediately stepped in the boots of his father is another thing But he is son of founding father and gigantic figure of Kenya and he is alsoutstanding leader of Kenya today You want another rock? Evidence?

Just as we are writing our comments Mzee Uhuru Kenyatta our great neighbour and brother was meeting US president Biden.

He was welcomed by Biden as great friend of America and Africa
What is wrong with offsprings of Great African leaders ?Nothing.Just jelousy!!!?
Report to administrator
+1 #25 Lakwena 2021-10-18 08:05
Zaitun, these are internationally wanted diabolic fugitives taking refuge in the safety of our State House.

In other words, they have committed all the forbidden and deadly sins in the Holy Books; and broken all the laws in our Law Books and International Laws.

Although guilty like sin itself, they have the audacity to continuously and maliciously trump up capital offense charges on vocal innocent Ugandans (the opposition) who are fed up with their criminality and especially PUNDER!