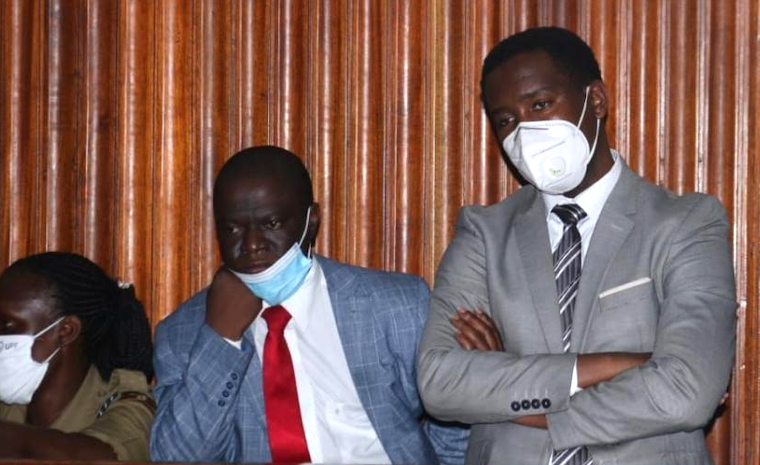 Opposition MPs Allan Ssewanyana of Makindye West and Muhammad Ssegirinya of Kawempe North have been remanded to Kitalya prison for allegedly participating in the murder of people in Masaka district.

The two National Unity Platform (NUP) MPs were arraigned before the Masaka Chief Magistrate's court after appearing at Masaka central police station to record statements about their alleged participation in the gruesome killings that have engulfed in Masaka sub region in the recent past and claimed at least 29 lives.

The MPs are charged with three counts of murder and attempted murder, offenses they allegedly committed on August 23 this year at Ssetaala and Ssenya villages located in Kimanya-Kabonera division in Masaka city.

The two MPs were taken to court amid heavy security deployment and appeared alongside Bruno Wamala and John Mugera who according to prosecution are accomplices in the murders.

According to the charge sheet, the four have been jointly facing similar charges of murder alongside two more suspects; Mike Ssemanda and Jude Muwonge who were earlier charged and remanded to Ssaza prison facility in Masaka.

According to police, they were arrested after revelations from some of the confessing culprits who pinned them on the murders that have occurred.

Charles Yeitese, the Masaka chief magistrate indicated that given that the suspects are facing a capital offense of murder, his court does not have the jurisdiction to enter their pleas, thereby sending them to Kitalya prison for 6 months, a period after which suspects on capital offenses can qualify for mandatory bail.

Court, however, granted the suspects permission to return on September 15th this year, to check on the progress of investigations into the offenses.

Erias Lukwago, the lawyer of the two MPs told journalists after the court session, that they are going to file an application to the High court seeking the release of his clients on bail on medical grounds.

Lukwago alleges that his clients are framed by the regime for political scores, something he says will complicate the pursuit to apprehending the real killers in Masaka.

"We adduced evidence to police that on the night of 23rd August which they are talking about, Hon. Ssewanyana was out of the country in Japan. How could he have at the same time travelled to Kabonero to execute the murders? It is ridiculous. Be as it may, we're going to apply for bail, we're going to work throughout the night and by dawn tomorrow we'll be ready with our papers and hopefully, we'll be heard because health-wise our clients are not well. They have some health complications which might worsen while on remand." Lukwago said.

"The issue of mysterious murder has been complicated by the events we're witnessing. When you change the narrative now that these murders are associated with politics then you're making it more complicated. You're compounding up the whole matter. Are they now telling the nation that Ugandans are now that gullible to believe that kind of crap that these are the masterminds? So we're really worried about the safety of Ugandans." Lukwago added.

According to police records, a total of 38 suspects are held in different security detention centers, of which 14 have already been presented before court of law, in relation to murders that have claimed by their count, 26 lives in the district of Masaka and Lwengo, where 9 people are also nursing injuries inflicted on them by machete-wielding assailants.

In other words, for bearing false witness is one of the unforgivable sins and crimes against humanity; for which you will be dumped in the "Unforgivable Sins/Crime Section of Hell" where you can never raise your heads above your conscious guilt.

My dear Lakwena, this hog of a man does not care any longer, for he knows that his place has been reserved in hell already.

But his problem now is to find collaborators with whom he will go and burn together. After all, he is already pannicking. That is why he fears to hear of the "word" death and fears leaving power thinking that by staying longer death will never come to get him!

This man and his people have a very dngerous politics to uphold: reduce Ugandan population so that with their friends who come here as refugees, they will take over the country and then turn Ugandans slaves to do dirty jobs here and there.

Once they voted to remove term limits and the age limit, the President does not need you any more.

He considrers himself invicible. It is clear today no one in Uganda can control Museveni's actions. Get ready for more abuse
Report to administrator
12