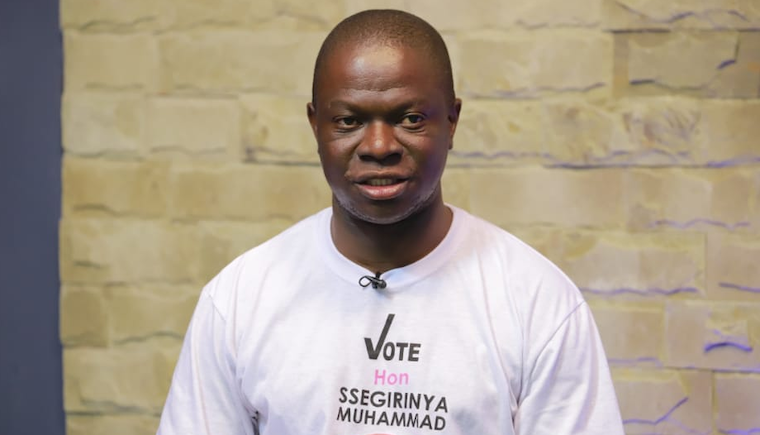 Kawempe North MP Muhammad Ssegirinya can now breathe a sigh of relief after the High court in Kampala dismissed an election petition filed against him by his political rival Sulaiman Kidandalaon on grounds that he was not effectively served.

Kidandala's lawyers of Alaka and Company Advocates filed the petition against the legislator accusing him of lack of academic qualifications to be in parliament. However, they couldn't trace Ssegirinya who was in prison at the time, to serve him with a copy of the petition. As a result, they filed an application before the High court judge Emmanuel Baguma for substituted service.

Justice Baguma directed the lawyers to serve Ssegirinya from prison and that the service is witnessed by the officer in charge of Kitalya Government's Prison.

The judge also directed them to pin a copy of the petition on the prison notice board. However, Kidandala's lawyers led by Fred Kato returned an affidavit of service saying that when he went to prison neither Ssegirinya nor the officer in charge of the prisons accepted to acknowledge receipt of the documents.

As a result, the Electoral Commission's lawyer Eric Sabiiti filed an application seeking to dismiss the entire petition on grounds that Ssegirinya was not effectively served. Sabiiti relied on an affidavit sworn by Felix Mugiya the deputy officer in charge of Kitalya Government's Prison who denied ever being served.

In her ruling, lady justice Henrietta Wolayo today dismissed the petition saying that Ssegirinya was not effectively served and that the orders of justice Baguma ought to have been complied with fully which was not the case.

She added that the orders of court are not supposed to be taken lightly by choosing which one to comply with and which one not to. Wolayo termed Kidandala's petition redundant and accordingly struck it from court records with orders that each party bears its own costs.

The ruling was delivered in an open court by civil division assistant registrar Agnes Alum on behalf of the judge whom she said was engaged in a plea bargaining meeting. Kidandala lawyers led by Paul Kenneth Kakande have said that they are going to appeal against the decision.

Eric Sabiiti, the lawyer of the Electoral Commission said people of Kawempe should now celebrate that Ssegirinya is now their rightfully elected MP. He hailed the judge for the ruling saying it was the only logical conclusion that any court should have arrived at.

Kidandala who was the runner-up in an election that attracted nine other candidates argued that Ssegirinya’s nomination papers were invalid because he did not have the requisite academic qualifications to contest for a parliamentary seat.

The law requires all persons contesting for a parliamentary seat to have A-level or its equivalent. But according to Kidandala’s petition, the O’level and A’level academic documents that Ssegirinya presented to the Electoral Commission were forged, which constitutes a crime under the Parliamentary Election Act.

He had also alleged that Ssegirinya’s nomination was not accompanied by the names and signatures of a minimum of ten persons who are registered voters in the Kawempe North constituency, as required by the law.

Through his lawyers, Kidandala explained that Ssegirinya’s nomination papers were not signed and countersigned in accordance with the Parliamentary Elections Act.

He also indicated that Ssegirinya was never a registered voter of Kawempe North or anywhere in Uganda. This was because, by the time he officially changed his name from Richard to Muhammad Ssegirinya, the Electoral Commission had already finished updating the voter register.

The records also indicate that Ssegirinya gazetted his deed poll to change his name on October 13, 2020, one year after the closure of the update of the voter register.

Ssegirinya of the National Unity Platform (NUP) defeated nine other candidates when he scored 41,197 votes against his closest challenger Kidandala who had 7,512 votes.

+1 #1 Ugthinker 2021-09-07 14:05
This whole Ssegirinya thing shows the comprehensive brokenness of not only our judicial system, electoral process, but also the electorate!

They voted Ssegirinya under the pretext of opposition to government yet don’t ask why the same government desperately helps him circumvent accountability!
Report to administrator
0 #2 Akot 2021-09-07 18:33
Ugthinker, thanks.

It will be so so stupid, naive, illiterate, uncultivated & unconcerned acts if Ugandans go for next fake presidential/parliamentary elections!

Change for a better country only comes through UNITY of a people, for common cause!

What a pitty, not even tribal leaders see that they are helping Museveni finally own the country & make Ugandans landless, slaves for good!

Will Ugandans wake up when it's too late & who will help them?

Why don't Ugandans believe the country belongs to them & they should be FREE to decide how they are governed, by who, for how long?

Tribal leaders, mps, ministers, police/army & those in posts ensure Museveni's lifetime post while majority poor/uneducated are ignored; how can Ugandans still believe they are HUMANS?
Report to administrator