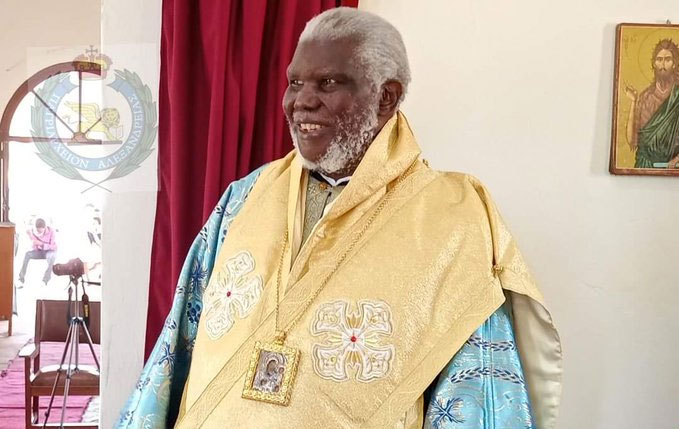 The head of the Orthodox Church Metropolitan Jonah Lwanga has passed away in Athens, Greece where he was reportedly rushed due to illness.

The exact cause of his death remains unknown but reports from the Namugoona church indicate that he has been battling an unnamed sickness for some time. Lwanga, 76, has been hailed by several people as one of the few prelates who stood by the people amidst ongoing human rights abuses and stood for the truth at all costs.

Lwanga was always outspoken on issues of human rights and democracy. In 2019, Lwanga said that the National Resistance Movement (NRM) leadership would collapse for disturbing the peace, progress and prosperity of the nation.

He said Ugandans would suffer human rights abuse until the ruling party is dissolved. His statement was in response to the rampant killings and human rights violations in the country then.

MPs who subscribe to the Orthodox faith have described Lwanga as a man who defended the faith, challenged the state irrespective of the outcome, as long as it ensured rights and well being of Ugandans.

Theodore Ssekikubo, the Lwemiyaga County MP says that Lwanga steered the church at a very critical time when the politics of the country was at a heated moment. He says Lwanga called government to order, and some people saw him as opposition and the enemy of the ruling party.

Ssekikubo says Lwanga loved Uganda, and was more concerned about its future in contrast to what was happening now. He says although Lwanga worked closely with the president, he always told the president the hard truth. He says as a member of the Inter-Religious Council of Uganda (IRCU), Lwanga fearlessly challenged the state over its actions.

“He was the defender of faith, defender of people’s rights - the only surviving voice which we had. He was the only candle that was still burning and it has burnt out now. By being in the Joint Interreligious Council anybody believed that he would be swayed by the wish to work closely with the president. At one time the president met them and I accompanied him to State House, the president was meeting with the IRCU leadership with a view of partnering and see how they can foster and work for development. In spite of all that, that did not stop him from pointing out the inequities of government, the human rights abuses, corruption amongst others.” said Ssekikubo.

Kalangala Woman MP Hellen Nakimuli described the late Bishop as a role model man of God in these times. She says that what stood out for Lwanga is that he did not fear anybody as long as it was the truth, saying the Bishop often said the truth will set you free.

According to Nakimuli, Lwanga was a leader who was not about pleasing anybody but stood to the truth, human rights and democracy. Nakimuli says Lwanga condemned corruption, killings and torture and several other gross human rights abuses.

Nakimuli says as part of the teachings of the Orthodox church, democracy and justice is key, and this is what Lwanga actually lived and practised. Lwanga was ordained deacon in 1981 and a priest a year later. In 1992, he was ordained vicar Bishop of Bukoba.

In May 1997 he was elected by the Holy Synod as Metropolitan of Kampala and All Uganda, Central Africa under the Eastern Orthodox Church of Alexandria.

How has been the year 2008?
We Ugandans are irrational people. And I don’t know if people understand the meaning of the word. But to explain it a bit, we don’t care anymore. We have not been taught, even in our schools, to do our duties diligently. Instead, we find ourselves unable to do what we are supposed to do. Unless something is done the situation will get worse in 2009.

Our political life?
Our political life in Uganda is just a game and there is nothing essential that is going on in the country. All this year, what good has happened? There is no strategic plan to improve the welfare or development of our people, so next year is likely to be worse. I have served as a bishop in Kenya for 10 years, in Tanzania for five years and now in Uganda for 11years. But the situation in Uganda is worse than in the other two countries.

Education and social welfare?
In the 1960s we were ahead of everyone. Look at the leaders in Kenya, they all studied here in Uganda, including President Mwai Kibaki. But now we are behind. I hear we have nearly 50 universities; I usually invite the recent graduates here and they fail miserably. I think our schools and universities are just making money. They are not adding any value to the young people.

What about the economy?
At the beginning of the year we had a crisis which was caused by foreign matters. We were unprepared for that crisis. Even now we are still unprepared for anything similar that might happen. There has been no research into how to resolve the matter. I wish the leaders would take note and learn.
Corruption has become much worse. This is because our people have lost faith in the leadership. Our leadership is upside down in it’s thinking with a devilish approach to issues. The devil is in opposition to logos [Jesus]; let them be servants of logos.

Challenges and achievements for 2008?
There was nothing good in 2008, just problems everywhere. Can you name anything good?  I don’t see anything. Look at our education sector, it is failing. Look at our health sector; it is in a mess, medical personnel can’t even afford gloves. Even if you fall sick and go to hospital, you might die. There is no hope. What have you seen that is good? I don’t see anything that is good. Look at the economy? We are lucky foreigners have come into our economy otherwise we would be finished.

What do you say about reports of child sacrifice?
This is the biggest sign that the Church is in transition; we have lost ground to the devil. That is why people feel free to behave the way they want. These people think that they are free but we can never be free of logos. We believe in logos or leaders being in charge. He should be at the centre of life. Everybody must learn to live like a servant, listening to logos. But instead things are upside down in Uganda. The people don’t respect their leaders. There is no hope, unless we start following logos; who is Jesus. And this Christmas I hope that more people will follow Christ, who is the word that became human in our lives. All people should go back to the rule of Christ then things can become organised again.

+2 #1 Wainanchi 2021-09-06 10:46
It is surprising that Archbishop Lwanga , good man of faith said something like this, As far as I know, he was very much for the NRM government and I can confirm that.

This article is nonsense and untrue

RIP in peace Your Eminence Uganda will miss you so much.Thank you for defending Orthodoxy
Report to administrator
-1 #2 Solo 2021-09-07 02:16
My friend you can confirm as an authority on Lwangaism, NRMism or……….?

It seems rich for you to make the statement” I can confirm”
Report to administrator
+1 #3 Wainanchi 2021-09-07 11:19
@Solo,_ What you are saying is blasphemy.
I was very close and good friend with His Eminence and can testify to that..Take care about your sile.Solo.

Thid is not about politics but about the Holy Man and Faith
May God have mercy upon your soul.
Report to administrator