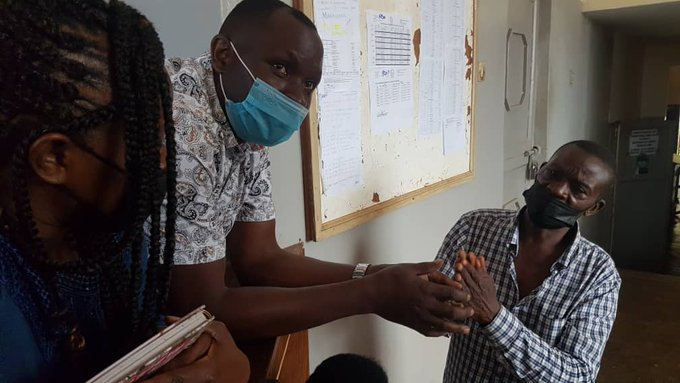 Wasswa, a senior correspondent with Deutsche Press Agentur (DPA), the German Press Agency was arrested on Thursday by security officers at Imperial Resort Beach hotel, a facility that is hosting the 51 Afghan evacuees who arrived in Uganda on Wednesday.

They are part of a group that is fleeing Afghanistan as the United States rushes to airlift thousands of people out of the country, after the fall of Kabul to the Taliban.

According to sources, 60-year-old Wasswa booked and checked into the hotel on Tuesday night, a day before the evacuees arrived and paid $167 for his accommodation. At the time, there was no indication that the hotel was out of bounds for Ugandan nationals or any other visitors, even though its security had been heightened.

However, Wasswa's woes began after security officers with the ministry of Internal Affairs tags questioned him after interviewing some of the evacuees for news articles.

"He was arrested because the hotel is now out of bounds. His presence could jeopardize the security of the evacuees and our national security interests," one of the security officers told URN.

Kampala Metropolitan Police deputy spokesperson Luke Owoyesigire says that Wasswa was doing work at the wrong time and in the wrong place. He says that the police in Entebbe have opened a general inquiries file to establish Wasswa's intention while at the hotel.

Early this week, the ministry of Foreign Affairs cautioned Ugandans against taking and publishing pictures of the Afghan evacuees hosted in the country. State minister for Regional Cooperation John Mulimba said that any such action may be tantamount to a security threat.

Mulimba said that some of the evacuated persons could be wanted by the Taliban government and taking their photographs could put their lives in danger and added that there is a need for media houses to report very cautiously because the matter has components of national security.

“I need to make an appeal to honourable colleagues, the country, but particularly to the media houses that the evacuees, who are now stateless, are people who are stressed, they need some kind of treatment such that they recover,” he said in a statement presented to parliament.

In terms of repression this regime is not different from the Taliban. Ugandans are killed everyday, arbitrary detained and persecuted within or outside the country.

You can easily pass for a spoilt child. People are running to your country for safety because it is very peaceful, Kikuubo is full of traders from countries in the region all of whom praise the enabling environment in your country, there is no war north-south-west-east...only dealing with occasional interruption of peace sanctioned by evil people like you...and you are there saying the country is like Taliban territory...spoilt children complain of 'bad brown car' when people elsewhere do not have feet to walk....that's how your statement feels
Report to administrator
0 #5 kabayekka 2021-08-30 12:02
Of course the authority concerned does not want any questions asked or answered.

It is like asking the American establishment how much money is it paying the regime governing this country for the care and maintenance of the normal refugees of Afghanistan? Any way one can work it out from what Wasswa has managed to illustrate.

Three nights can cost dollars 167.00. It means that 51 family members can cost the USA some billions of shillings for three months. The URA will certainly confirm to the national press the final bill when it has evaluated this commercial project for capital tax payment!
Report to administrator
+1 #6 Lakwena 2021-08-30 13:23
Quoting kambarage:

You can easily pass for a spoilt child. People are running to your country for safety because it is very peaceful, Kikuubo is full of traders from countries in the region all of whom praise the enabling environment in your country, there is no war north-south-west-east...only dealing with occasional interruption of peace sanctioned by evil people like you...

But Kambarage, Good and Evil is not in the Action but in the Motive. E.g. to hide his criminality; a notorious and known mafia can generously donate towards the construction of a Cathedral.

In other words, what is the motive behind King of Bloodshed, Gen Tibuhaburwa's open-door policy for regional and international refugees? It is to conceal his inhumanity to humanity on Ugandans, who are opposed to his diabolic architecture (authorship) and mastery of decption, manipulation, oppression and violence.
Report to administrator
0 #7 Evans Musa Ddungun 2021-08-31 02:49
Then release Fred Lumbuye if you follow the rule of law.

Otherwise Museveni's regime is the most brutal regime I have ever seen in my life.
Report to administrator