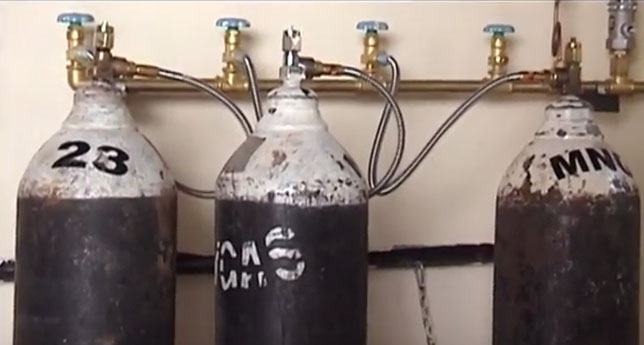 The ministry of Health has received US$ 7million about Shs 25billion from the Global Fund to install seven oxygen plants across the country.

He said the plants will be installed near the old ones at the respective regional hospitals while the one for Kampala will be set up in Wabigalo. The one in Kampala will serve facilities such as Entebbe hospital in Central region and will generate 300 oxygen cylinders per day.

Otim said installation of the seven new oxygen plants, expected to be completed by August, is timely because they will boost the country’s medical oxygen generation capacity.

Each plant can generate a maximum of 50 cylinders daily. The plants were installed between 2016 and 2020 at Masaka, Jinja, Entebbe, Mbale, Soroti and Fort portal Regional Referral hospitals among others.

The country is currently facing an oxygen crisis because of increased demand for medical oxygen, a lifesaving commodity for patients with chronic and acute illnesses. Lack of oxygen can result in severe complications and death. Last week, 10 COVID-19 patients died at Soroti Regional Referral Hospital due to oxygen shortage while the oxygen plant at Masaka hospital broke down recently because it was overstretched.

Mubiru said that critical patients normally consume five litres of oxygen per minute. This is approximately one cylinder a day. However, COVID-19 patients in critical condition use two to four cylinders a day.

“Our plant cannot generate more than 50 cylinders a day. But we are happy that we are refilling 15 more cylinders daily from the Roofing Ltd plant in Namave,” Mubiru said.

Eng. Otim however, said that the ministry is working round the clock to ensure Entebbe Hospital receives 50 oxygen cylinders daily so that they can have at least 90 to 100 cylinders for the critical patients.

He added that the ministry of Health is buying oxygen supplies from private companies to address the countrywide oxygen shortage. He said Roofings Ltd is supplying oxygen-free to Entebbe hospital and other public facilities while the ministry will pay for supplies from other suppliers including Luwero Industries Limited, Oxygas Ltd, Steel and Tube and Casement Africa Ltd.

Luwero Industries Limited is a subsidiary of the National Enterprise Corporation (NEC). NEC is the commercial arm of the Uganda People’s Defense Force-UPDF.

Since the plants cannot meet the oxygen needs of all the 180 patients, who need 3,600 liters of oxygen per minute, Nuwamanya said the hospital needs to refill at least 200 oxygen cylinders. These cylinders will be refilled by Steel and Tube and Roofings Ltd.

“But there are long queues at these filling stations because most health facilities are grappling with a shortage of oxygen,” Nuwamanya said.

Nuwamanya however, said the ministry of health plans to install another oxygen plant at Mulago next week. This plant will also generate 2,083 liters of oxygen per minute, doubling the capacity of the plants at the hospital.

“With our plants generating over 4,000 liters of oxygen per minute, we shall be able to meet the current needs of the 180 COVID-19 patients and over 20 patients in the medical emergency department who need oxygen,” he said.

Insider sources say some people are trying to cash in on the crisis. If they are not hiking food, vaccine or drug prices, the mafia in the health sector such as public hospitals will find something to hoard and sell on the black market. Already police is holding managers of two pharmacies found in possession of Astra Zeneca vaccines.

In similar vein, several government hospitals such Mulago and Mbarara, have been hit by a shortage of oxygen. They claim the production capacity at these facilities could not match the overwhelming numbers of patients in need of oxygen support.

However, the story from some facilities such as Rubaga hospital offers clues to some mischief afoot.

“I think the mafia has penetrated the oxygen market,” one desperate person with a patient at Rubaga said. “When you ask them where one can buy the oxygen, they will not tell you but they ask for money. They had said that Roofing stopped supplying oxygen because their factory closed,” he said.

“But later I called Roofing and they emphasized that they still supply Rubaga. Soon after, another truck showed up loaded with oxygen cylinders. When I asked them where they had gotten the cylinders, they claimed Jinja without giving me the specific name of the supplying company,” he explained.

In Kibuli and Mbarara, patients with Covid-19 in desperate need of oxygen sup- port have been referred to other hospitals. They insist they couldn’t admit them without a guaranteed supply of oxygen. Some patients did not make it to the referral places.

The surge in demand for oxygen has been aggravated by the unprecedented number of persons who have been hit by the disease. Save for sheer disorderliness of the ministry of health, it is difficult to imagine that hospitals, which were designated to handle Covid patients, can lack such an important medical ingredient such as oxygen.

Next corruption will eat most of the funding and lastly the project completion will keep being extended as the contractors and Gov't officials keep eating as much as they can from the project. Stop me if you heard this story before
Report to administrator
0 #2 banju Kore 2021-06-18 15:37
To prevent that money being stolen by Ugandan thieves [ corrupt officials] , the Global Fund would have sent along a team of its staff to ensure the money is put to the use for which it was given...

Otherwise again the Ugandan citizens will be the ones to suffer the sad consequences if that money is stolen.
Report to administrator