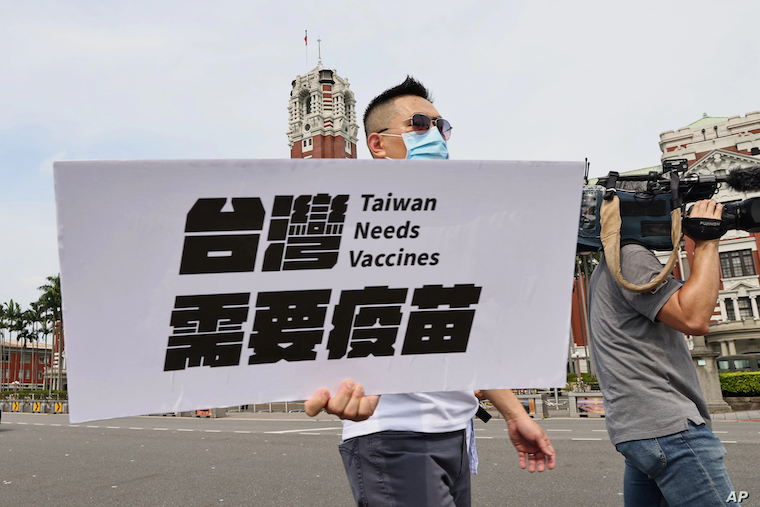 A lawmaker from Taiwan's main opposition Kuomintang (KMT) Party holds signs calling for the government to accept all vaccines and provide free vaccines for all citizens, in front of the Presidental building in Taipei, Taiwan

People in Taiwan, which had held off COVID-19 throughout most the global pandemic, are panicking about their health and income this month as the island grapples with its first major outbreak and shutters businesses amid limited vaccine supplies.

Taiwan’s coronavirus total since the start of the global pandemic stood at 12,500 on Friday, with 385 deaths. More than 90 per cent of the cases were recorded since May 15.

Officials in Taipei say their political rival China intervened in a vaccine import deal earlier in the year. Japan and the United States have announced vaccine donations this month to help compensate for the shortage as officials scramble to order imports and fast-track trials of a domestically produced vaccine.

People have become “really concerned” since mid-May and have begun looking for vaccines despite possible side effects, said Joanna Lei, CEO of Chunghua 21st Century Think Tank in Taiwan. Many Taiwanese with dual citizenship in the United States have hopped on U.S.-bound flights this month to get vaccines.

Taiwan is “far” from the double-digit vaccine rate that might offer “herd immunity”, she said. An estimated 1% of Taiwan’s nearly 24 million people were vaccinated as of mid-May.

“I think the really scary part is the government has no plan," Lei said. "And they don’t have a real survey of the land because they did not do broad testing, so they actually have no clue about where things are happening."

More than 84 per cent of Taiwanese worry about relatives getting the coronavirus and about 65 per cent say their income will be “hit”, according to a Taiwanese Public Opinion Foundation survey released May 25. More than half of respondents called the current COVID-19 wave a “disaster” caused by humans rather than by nature.

“I see people are all quite nervous about whether their family members are going to get infected by this virus,” foundation Chairman You Ying-lung said. “You’ll find that a high proportion are very worried.”

Without vaccines, Taiwan is looking at an unknown period of forced business closures and income losses, particularly in events, recreation and restaurants. Those businesses have been shuttered or scaled back since May 15. Operators are expecting government stimulus aid if business dips far enough below pre-May 15 levels.

“For us in food and beverage, we should be optimistic about aid, because if it’s not enough, I can’t sustain the business,” said Chien Chia-hsing, owner of the 6-year-old Aussie Café in Taipei. His normal daily customer load of 50 has dropped to just a handful who get takeout. “I hope that the government can do its utmost to allocate money.”

“For over a year, we’ve seen that COVID-19 strikes without regard to national borders – and we know we won’t be able to truly end the COVID-19 pandemic at home without ending it everywhere,” the senator said on her website.

Washington and Tokyo are long-standing friends of Taiwan, as all three fret over territorial disputes or deeper political issues with China.

“You always want to help friends,” said Alex Chiang, associate professor of international politics at National Chengchi University in Taipei. "They have to show friendship and that they care about the people of Taiwan."

Taiwanese officials blame China for standing in the way of foreign-made vaccines.

“Taiwan access to vaccines continues to be slowed down by Chinese interference, while they insist we buy Chinese made ones,” presidential spokesperson Kolas Yotaka said May 19 on Twitter.

Taiwan was approaching a deal with German pharmaceutical firm BioNTech in January for millions of vaccine doses, but interference by “external forces” threw off the agreement, health minister Chen Shih-chung told local media a month later without naming China directly.

Taiwan bars Chinese-made vaccines because of their poor record before COVID-19, Chen said in an interview in January. The government's Central Epidemic Command Center would not say for this report how many vaccines it expects from foreign sources by year's end but pointed to "insufficient" capacity to make them worldwide.

China has claimed self-ruled Taiwan as part of its territory since the Chinese civil war of the 1940s, when Chiang Kai-shek’s Nationalists lost to the Communists and rebased in Taipei. Beijing has threatened use of force, if needed, to take Taiwan and resents foreign assistance to the island.