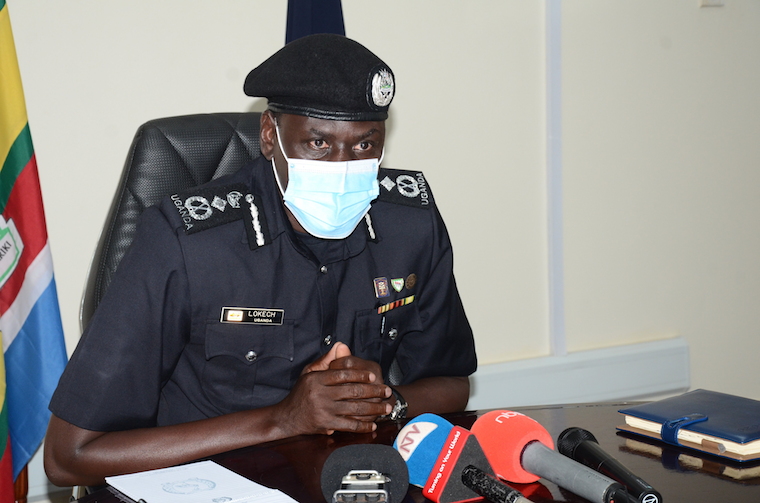 Gunmen who killed Gen Katumba Wamala's daughter and his driver trailed their vehicle for over 4 kilometres, the deputy Inspector General of Police (IGP), Maj Gen Paul Lokech, has revealed.

The former minister for Works and Transport and former chief of defence forces, today narrowly survived death when masked gun-wielding men showered his military vehicle reg. no. H4DF 2138 with more than 20 bullets along Kisota road in Kisasi a Kampala suburb, killing on the spot his daughter Brenda Nantongo and driver Haruna Kayondo died.

Gen Lokech basing on police preliminary findings said, the incident happened between 8:47 am and 8:58 am although there was a tweet from his purported account at 9.03 am. Lokech in a statement said the assailants trailed Gen Katumba’s vehicle as soon as it left his home at Bulabira-Najeera until when they reached a remote location about 4 kilometers along the Kisota-Kulambiro road.

“This is the first major shooting since 2019 and we strongly believe it was a targeted and not random incident. The assailants who were 4 in number were riding on two motorcycles with concealed number plates, pulled up next to Gen Katumba Wamala’s car and shot several bullets that instantly killed Nantongo Brenda and Haruna Kayondo,” Lokech said.

Lokech has said a team of police experts from the directorate of CID and forensic is thoroughly documenting the scene for traces of evidence. Security attributes the shooting to four armed assailants who managed to escape.

Soon after the shooting, Katumba was rushed to the nearby Malcolm clinic in Kisasi before he was transferred to Medipal International hospital along John Babeiha road. Katumba in a video message from his hospital bed said he was out of danger but asked Ugandans to pray for his wife who was badly traumatized.  President Yoweri Museveni like he does after every such high-profile murder described Gen Katumba’s attackers as pigs.

Museveni said he had talked to Gen Katumba and was well being managed. Museveni also expressed dissatisfaction with the fact that Katumba’s bodyguard Sgt Khalid Kaboyoit shot in the air instead of killing at least one of the assailants.

“The pigs who do not value life shot at Gen. Katumba killed his daughter and driver and injured him. The bodyguard should not have shot in the air. He should have shot to kill. We could be having a dead terrorist instead of scaring away the terrorists. His shooting saved Gen. Katumba by scaring the criminals away,” Museveni said.

Katumba is not the first high-profile Ugandan official to be attacked by armed gunmen riding on motorcycles. On March 17, 2017, unknown gunmen trailed and shot dead the former police spokesperson, Andrew Felix Kaweesi, his bodyguard, Kenneth Erau and driver, Godfrey Mambewa.

The trio was gunned down, a few meters from Kaweesi's home in Kulambiro in Kisaasi, a Kampala suburb. Kaweesi's assassination followed the nearly a carbon copy murder of former state prosecutor, Joan Kagezi in 2015 and Major Muhammad Kiggundu in 2016.

They are already falling in Gen. Museveni's trap of relying on recent technologies instead of time tested investigation approaches based on conditions of the scene of crime, choice of kill zone, circumstances that made the kill zone ideal, weather conditions, terrain, unusual patterns and movements, e.t.c.

When army commanders whose job is to destroy things are given a Police uniform to lead investigations, one is left to wonder whether it is the state playing games or police investigation is as well part of the collateral damage resulting from incompetent leadership.
Report to administrator
+1 #12 Lakwena 2021-06-02 08:46
In other words, Gen Katumba's vehicle was bugged with a beacon tracer. And bugs are only purchased/acquired by the state/spy agents (Classified expenditure) STUPID!

Even a useful idiot should have by now known that: under our "Problem of Africa, Author and Master of Violence", Gen Tibuhaburwa, no one is safe. E.g. he used Guerilla tactic to defeat Kadaga in the Speaker ship race.

Remember, they e.g., using a band saw, went after Kirumira and cut him out of his house, where he had barricaded himself.

In other words, if Gen Wamala procrastinates, he will soon be dead, and will only have himself to blame.
Report to administrator
+1 #13 Lakwena 2021-06-02 08:54
In other words, after mission impossible becomes accomplished. Gen Katumba should save us/Ugandans from the bloodbath aftermath of his unnatural demise.

I can only imagine what would have happened on the streets of Kampala yesterday, if Gen Wamala was indeed murdered by his assailants. The Kyagulanyi riot of 18-19th November 2020.


Never say never!
Report to administrator
+2 #14 Lakwena 2021-06-02 09:22
But this should also be a wake up call: that violent death can also visit the households of those who dispense violence and constantly remind us with the language of crushing others.

E.g. Gen Aronda (RIP) used to threatened the opposition with a crush, less did he know that he would check out mid-air, the Arabian Desert.
Report to administrator
0 #15 kabayekka 2021-06-03 12:41
Apollo you have a good point. No government in the world has ever won a guerrilla warfare.

And this President knows it well. Unfortunately for a poor country like Uganda, loaded with international debts, and the ever increasing infection of COVID19, the national economy is likely to continue to suffer greatly.
Report to administrator
12