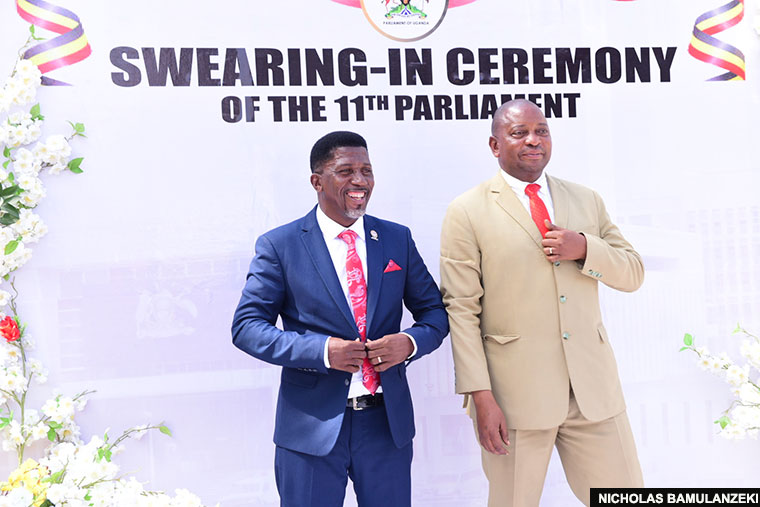 The administration of oath for MPs-elect of the eleventh parliament kicked off Monday morning at the Parliamentary buildings in Kampala. The process, scheduled to end on Thursday, May 20, will see parliament welcome the highest number of legislators having moved from 426 to 529 in recent polls.

Every person elected to parliament takes the Oath of Allegiance and the Oath of Member of Parliament, before they officially start their five-year term of office. The ceremony, which is following the alphabetical order of names of each legislator, saw 132 members take oath on Monday, according to a programme issued by Parliament’s director of Communications and Public Affairs, Helen Kawesa.

At least 65 MPs took the oath in the Monday morning session, out of the scheduled 66. MP Prossy Akampurira Mbabazi, the Rubanda Woman MP, did not turn up. Jesca Ababiku, the Adjumani Woman MP, opened the swearing-in process.

After taking her oath, Dr Jane Ruth Aceng pledged to transform her constituency. She said most of the areas in the northern region are still far behind in regard to education and other services. She added that people in the northern region also need economic empowerment since this is one of the areas in Uganda that has been disadvantaged even before the Covid-19 pandemic.

Lillian Aber said she will mobilize her constituents in Kitgum district to increase agricultural production. Cuthbert Abigaba Mirembe, the Kibale County MP, said he will accomplish some of the projects he lobbied for his constituents in his previous term, citing electrification, bridges and others.

Sarah Opendi Achieng, the Tororo Woman MP, said she expects a vibrant 11th parliament that will focus more on service delivery and ensuring that all Ugandans are served equally. She added that the 11th parliament should also ensure that necessary legislation in the health and mineral sectors are made.

“We are in a multi-party dispensation. I expect us to be more tolerant and understanding and ensure that whatever we do is for the good of the people of Uganda that elected us,” Opendi said.

Joan Alobo Acom, the Soroti City Woman MP, said she expects to coordinate and work together with MPs from different political parties for the good of the country. All incoming legislators were strictly required to be in the company of three people and masked up in compliance with the existing Covid-19 standard operating procedures (SOPs).

Surely a rotational timetable should be in place to allow half the members to be in session while the other half carry out constituency duties and essential voting done over zoom.

It also allows equitable participation in the house, I know this because some MPs have spent 5 years without speaking in the house!
Report to administrator