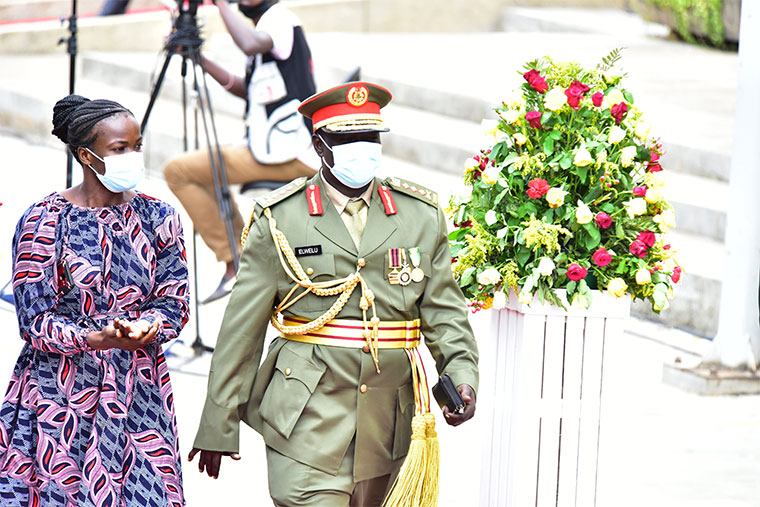 The newly elected army representative in parliament, General Peter Elwelu has said that the more than 100 royal guards and family members who were killed during the Kasese clashes were criminals 'who deserved what they got.'

The police and military agencies have been repeatedly accused of killing more than 100 people in November 2016, when their forces descended on the Rwenzururu palace, at the climax of long-standing tension, between the government of Uganda and the Rwenzururu kingdom, the home of the ethnic Bakonzo community.

According to a report released by Human Rights Watch in 2017, at least 153 people, including children, died during the raid which was commanded by Elwelu, then a brigadier and commander of the Uganda Peoples Defence Forces, Second Division. His team is said to have recovered 16 patrol bombs, 47 pangas, 42 knives, three metal detectors, four radio calls, one SMG rifle, and one pistol with two magazines from the Rwenzururu loyalists in the palace.

In the aftermath, the Rwenzururu king Charles Wesley Mumbere and more than 150 of his royal guards were arraigned before a court in Jinja district and charged with treason, terrorism, and murder, among other crimes. Many spent more than four years in detention, until recently when they were all granted bail.

But the events of the two days still follow Elwelu everywhere he goes and were still put to him after taking oath this morning, to join parliament as one of the ten army legislators. In response, Elwelu said that the intervention in Kasese has resulted in peace, and it is not something that he would regret because pacifying the country is part of his call as a serving officer of the armed forces.

Elwelu said that he does not have a tainted image, but rather a pat on the back for a job well done, even if he was sanctioned by the United States of America.  But he hastens to add that he is not bringing guns to parliament, but the ability to debate issues for the betterment of the country.

"Even ICC set me free and said you have no case to answer, so what are you talking about? Those were criminals, I didn’t kill anybody else. They deserved to die because I was on the ground and you were not on the ground, that’s the problem. I know I’m a judge of my own during my work, I understand and that is what I do, I know what I do that’s why I have no problems here. Uganda is peaceful because of my actions and Kasese is peaceful, they are doing very well. Did you hear any problems with Kasese again? Only quiet," Elwelu said.

Elwelu says his priority is national security, and he does not intend to stay silent when it is threatened, a reason he believes that the army is still needed in parliament.

Kasese Woman MP Florence Kabugho, says that they have handed Elwelu over to God because the people of Kasese are still mourning their mothers, fathers and brothers and sisters, yet the commander of the offensive appears to be mocking them.

"People may be very quiet but they are very very hurt because of the atrocities that were committed altogether. Someone cannot kill your mother, your sister, brother and you move on. We have no guns to use, we’re not going to incite violence, no. But the law one time will catch up with him, I still insist that one time the law will catch up with him, the people of Kasese are very very bitter because of the atrocities committed onto them. We’re shedding tears because of our brothers and sisters killed. Many people have been left orphans, many people are widows," Kabugho said.

123
0 #21 Lakwena 2021-05-20 09:38
In other words Kambarage, we have a criminal cam terrorist for a president, who for the last 35 years and counting; is polluting our State House, which is Temple Leadership and Service, with the abomination of corrupting and spilling the blood of innocent Ugandans.
Report to administrator
-1 #22 kabayekka 2021-05-20 18:39
Even if civilians are armed with pangas and knives and fire bombs and the police have failed to pacify them, the national military must come in to de-escalate the situation and not to kill and destroy life.

That time in Kasese it was not an external war zone between two states! Unfortunately that is why with such UPDF mistakes, the Uganda Army has failed to be of any help to pacify the fighting parties in Somalia, Congo and South Sudan.
Report to administrator
123