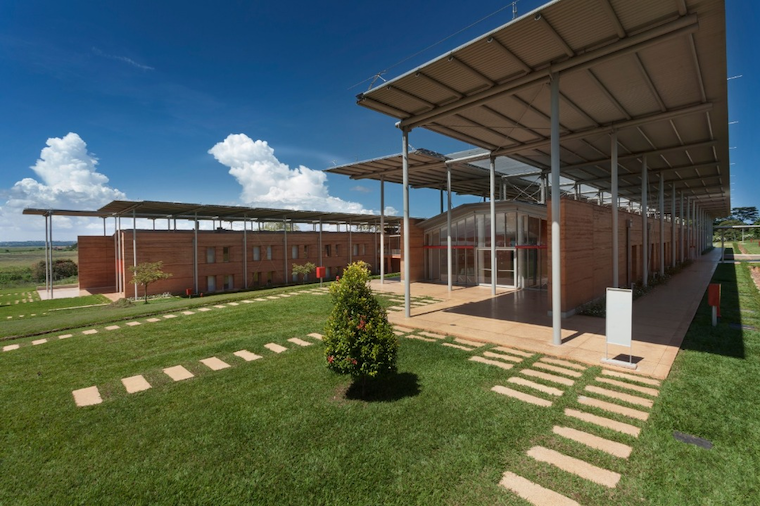 The Children's Surgical Hospital in Entebbe

A free Children’s Surgical hospital in Entebbe has begun clinical activities with its first six patients, Ramadhan, Topista, Justine, Katongole, Matovu and Jordan aged between 3 and 11 years hospitalised for a range of medical conditions.

The six children were admitted to the hospital with several health conditions concerning the genital area, gastrointestinal tract, and supraumbilical hernias according to the press statement.

The new facility, according to the statement was designed pro bono by Renzo Piano, one of the world’s leading architects after a meeting with Gino Strada, surgeon and founder of EMERGENCY.

The two then came together to create a state- of-the-art hospital where paediatric surgery meets with architecture of the highest level to create a facility where children from across the African continent can be referred for free, high-quality treatment including surgery for birth defects, urological and gynaecological problems, gastrointestinal tract issues, diseases of the bile duct, and cleft lip.

The hospital opened its doors this week on Monday with the admission of its first patient, Ramadhan aged 2 years who needed an operation on his genital area. But the official opening was from last year postponed due to the COVID-19 pandemic.

At full capacity, the hospital will employ 385 local people, 179 of whom are medical workers. The ratio of local to foreign staff is four to one amongst the surgeons, nurses, pharmacists and technicians, while 95 per cent of non-medics are Ugandan.

The hospital will be dedicated to training Ugandan staff, who will go on to improve paediatric surgery and medical care in Uganda.

“Healthcare in Africa should be at the same level as it is in the Global North. This project comes with all the skills, equipment and technologies needed to start high-level surgery in an extraordinary facility. We are all part of the human family. We are ‘equal in dignity and rights’, as the Universal Declaration of Human Rights says. We have a responsibility to provide exactly the same level of treatment for African children that is expected in richer countries,” says Gino Strada, surgeon and founder of EMERGENCY.

In Uganda, the mortality rate for children under five is 49 for every 1,000 live births, and 30 per cent of those deaths are due to a lack of adequate surgery

The ministry of Health took part in the project’s development, shaping its collaboration with the existing Ugandan healthcare and education systems, providing the land on which it was built and paying 20 per cent of the running costs, as outlined in the African Network of Medical Excellence’s founding aims, the statement notes.

EMERGENCY is an independent, neutral organisation, founded in 1994 to offer free, high-quality medical and surgical treatment to victims of war, landmines and poverty. Since then EMERGENCY has treated over 11 million people: one every minute. EMERGENCY promotes a culture of peace, solidarity and respect for human rights.

0 #1 Lysol 2021-04-24 00:16
We hope that hospital is not built (by the Chinese) for organs harvesting and trafficking for their people back home. They do that even for those in death row.
Report to administrator
+2 #2 peace 2021-04-28 11:24
i was at the facility with my son for a surgical consult and was warmly welcome and thrilled that we have such a facility with first class service in uganda. thank you
Report to administrator