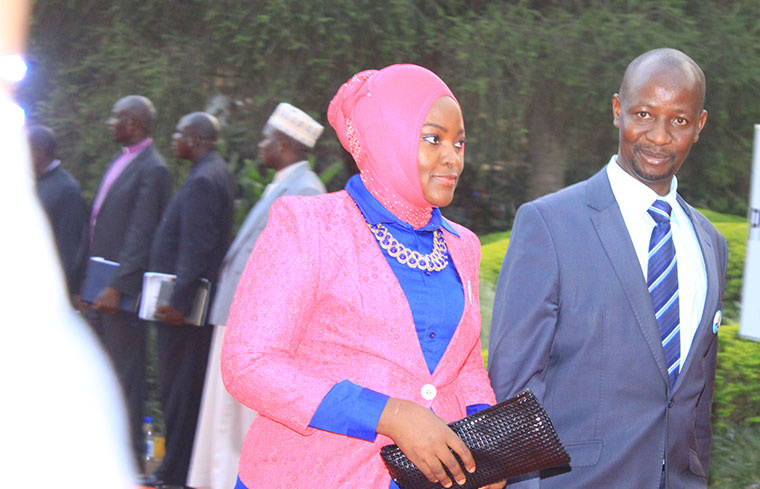 FDC has endorsed Ssemujju Nganda (R) for the speakers race

The Forum for Democratic Change (FDC) has officially endorsed Kira Municipality MP Ibrahim Semujju Nganda as their flag bearer for the position of speaker of the forthcoming parliament.

FDC chairman Wasswa Birigwa made the announcement today at the party offices in Najjanankumbi in Kampala. He says the 11th parliament needs a dynamic and visionary leader to steer it to make better laws to benefit the people of Uganda. Birigwa says Ssemujju has proved that he can serve in the position of the speaker of parliament, looking at his track record as an active member of parliament and the opposition chief whip in Parliament over the years.

According to Biriggwa, the party National Executive Committee (NEC) unanimously agreed to have Semujju stand for the position and be deputized by counsel Yusuf Nsibambi, the MP-elect for Mawokota South.

Biriggwa says FDC has nothing bad to say about the current speakership but it is time for a change. He urged all members of the forthcoming parliament including those from the ruling National Resistance Movement (NRM) to rally behind their two members for dynamic and visionary leadership.

The head of the party Electoral Commission Boniface Toterebuka says Ssemujju was approved because of his experience as a legislator and plausible service. Upon revealing his intention to stand for the position, Semujju early in March wrote to all parties with representation in parliament seeking their support.

Titerebuka says Semujju understands how the house works because of his experience as a parliamentary reporter for more than ten years and a later a legislator for two terms. Parliament shall sit to vote on the two positions after swearing-in of the 11th parliament next month.

Kampala Central MP Muhammad Nsereko has expressed interest in the position of deputy speaker, a position he once stood for but lost narrowly to Oulanyah. FDC's Nsibambi is said to be in talks with the National Unity Platform (NUP) to form an alliance on the position.

FDC lost its position as the dominant opposition political party in parliament to NUP in the January 14 polls. NUP spokesperson and Nakawa West MP-elect Joel Sennyonyi says they have constituted a committee to discuss their position on the two positions.

+1 #1 WADADA rogers 2021-04-20 13:35
This guy is capable, i wish UPC, DP and NUP as well as opposition leaning Independents can all rally behind Semujju. He is capable of being the best speaker ever that this country has ever had.
Report to administrator