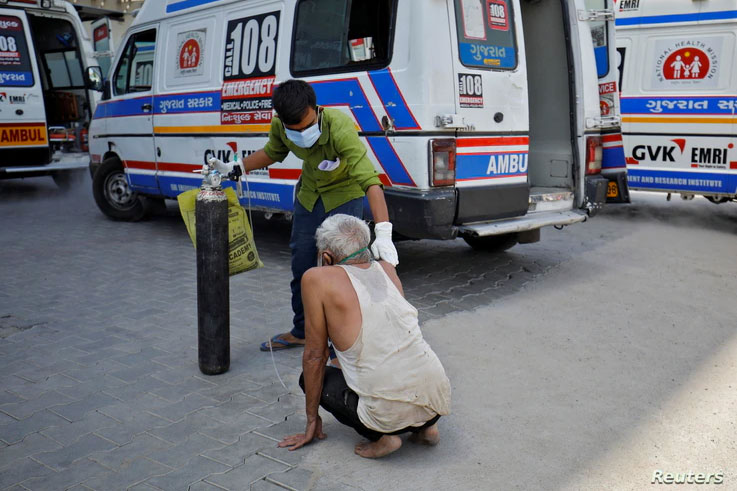 A patient with breathing problems being helped in New Delhi

India’s capital, New Delhi, has announced a six-day lockdown as the city’s health system became overwhelmed after a record spike in cases of COVID-19.

As India reels under a second wave of the pandemic, British Prime Minister Boris Johnson cancelled a trip to New Delhi scheduled to take place next week. India’s Foreign ministry said the two sides “will hold a virtual meeting in the coming days to launch plans for a transformed UK-India relationship.”

New Delhi’s Chief minister Arvind Kejriwal said at a virtual press briefing on Monday that there were fewer than 100 critical care beds left in the city’s hospitals and that medical oxygen and key drugs were in short supply.

“I don’t say it has collapsed, but every health system has its limits, and if we don’t take tough steps now, it can collapse,” he said announcing the decision to shut down the city till next Monday.

Pointing out that the city of 20 million has recorded about 25,000 cases daily in recent days, he said that hospitals are unable to take more patients in big numbers. The Indian capital is not the only one struggling to cope – in other cities too like the country’s financial capital Mumbai - people are scrambling for hospital beds and authorities are flagging shortages of medical oxygen and medicines.

Mumbai has already shut down most industries, businesses, and public places until the end of the month. In recent days, social media platforms have been filled with appeals asking for help to secure beds, medicines, ventilators, and even tests for COVID-19.

The pandemic’s second wave in India is proving far deadlier than the first with daily infections spiking to new record levels in recent days. The nationwide count on Monday was 273,810, taking the country past the 15 million number in total cases.

The surge has caught the vast country unprepared. Just weeks ago, authorities were optimistic that the threat posed by the virus was passing. Health minister Harsh Vardhan said in early March that India was in the “endgame of the pandemic,” as daily infections plummeted.

But by the start of this month, India was staring at the virus ravaging through the country at a pace not seen during the first wave. Epidemiologists say India let its guard down too soon and was not sufficiently prepared for a second wave or for more infectious variants, which many countries have witnessed.

The economy opened fully, packed political rallies have been held as five states went to the polls and one of the world’s biggest religious festivals in the northern city of Haridwar has seen millions turn out daily to take a dip in the Ganges with little heed to COVID-19 protocols of social distancing and masking.

Now sprawling cities like New Delhi are scrambling to deal with the fallout. As the Indian capital shuts down, Chief minister Kejriwal appealed to millions of migrant workers not to worry – a lockdown last year had devastated migrant labour, prompting many to walk hundreds of kilometres to their villages.

"I know when lockdowns are announced, daily-wage workers suffer and lose their jobs,” said Kejriwal. “But I appeal to them to not leave Delhi, it's a short lockdown and we will take care of you."