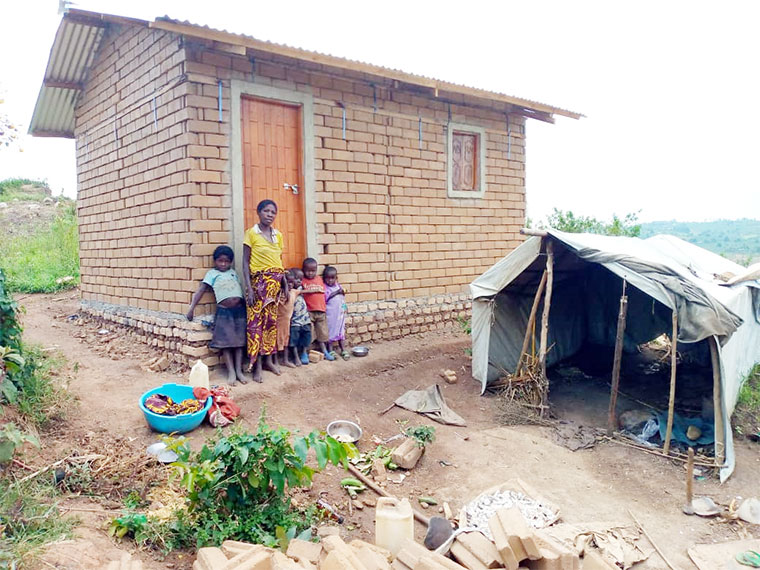 Sifa Musanganya stands at the new house with her children

In many areas of the country, the rainy season is welcomed with open hands but in refugee settlements, it is a menace that destroys settlers’ belongings on top of exposing them to disease.

In the worst case scenario, some refugees have been swept away by floods. But as Derrick Kiyonga writes, various stakeholders in the sector are offering settlers in Kyaka II refugee camp in Kyegegwa a ray of hope through decent housing.

Recently, stakeholders in the refugee sector together with officials from the ministry of Relief, Disaster Preparedness and Refugees had a guided tour of the camp to assess its preparedness to handle the current rainy season.

Kyaka II is home to more than 17,000 refugees, most of whom are from Rwanda and DR Congo. For Maisha Sifa Musanganya, a refugee and mother four, the past two years have pushed her life to the limit.

“I’m lucky to be here and alive because I’ve gone through destitution, persecution and mental torture,” she says through an interpreter as she prepared a simple meal on the verandah of her house.

Currently, 41 houses have been constructed for the elderly, the sick and the most vulnerable in Kyaka II refugee settlement. Houses are spread in parts of Mukondo, Kyamagabo and Sweswe within the settlement.

To implement the project, community-based organizations helped in making the blocks that are being used for construction, as well as other groups helping in construction and carpentry.

When Sifa arrived from the DR Congo in 2019, she was a helpless mother, who had survived death in her home country.

Her tear-jerking ordeal from hopelessness to hope started two years ago while living in a small village in north Kivu, DR Congo. Her story also provides insight into how refugees end up in Uganda, not to mention the overwhelming challenges facing government and development partners.

Sifa and her husband, Musa Musanganya, had a loving family with four children. But on this one day in 2019, horror knocked on their door in the dead of the night. First, they overheard the sounds of men around the house but little did they know that this was the last night they would be as a family.

Moments later, Musa, the provider and protector of his household, was removed from the safety of his house as the men they had overheard walking in their compound took him away.

They had knocked out the door and entered forcefully without notifying those in the house who they were. The intruders searched the entire house and then went off with her husband amidst cries from his household members.

“There were no words said, only actions were done, and in less than 15 minutes the whole ordeal was over,” she recalls.

A neighborhood search was initiated in the morning after Sifa reported the abduction to the area local council leadership and the police. Unfortunately, there was no record of him at the local police station as they were further referred to the regional police station.

With no good news coming from the investigation a few days in, Sifa decided to take the case to the public to get their assistance in finding him. Days later, a decomposing body of Musa was found lying in the bushes. He had been murdered.

From then on, Sifah knew she wasn’t safe because those who had killed her husband could return another night and kill her and the children.

“At dawn, I started moving with my children within the bushes with no clear direction and my little baby of four months went on crying, the pain was too much,” she says.

“After four hours, I reached the main road where I boarded a lorry carrying merchandise to the nearby town of Bunagana.”

“The young ones were tired and we had to stop at some point. A good Samaritan who overheard our story directed us from Bunagana to the offices of UNHCR [UN refugee agency] in Uganda.”

From there, Sifa joined other people fleeing the troubled region of DR Congo into Uganda.

“We did not use proper channels to enter Uganda, neither did we have proper documentations anyway but we found our way to Nyakabande from where we joined Kyaka II refugee camp,” she says.

Sifa says she and her children were welcomed and allocated where to set up shelter using tarpaulin.

“With the help of the community, we set up a simple tent that has housed us for the last two years but we have always faced trying times during the rainy season,” she says. “The tarpaulins cannot hold the rains and on several times we have been washed away by heavy rains.”

One morning in November 2020, Sifa was trying to patch up the tarpaulin after being destroyed by rain when she saw strangers pointing at her.

She feared for the worst, thinking they were planning to throw her out of the camp.

“They were speaking in English which I didn’t understand well but all I could see was pointing at us. I kept on wondering what they were talking about,” she recalls.

However, it turned out the men were from the ministry of Relief, Disaster Preparedness and Refugees, who recommended her to be placed among the beneficiaries of the refugee housing project.

“A week later, I realized the strangers were actually out to save me and my children from the rains. They laid the foundation…this was like a dream; I had previously tried to raise money to set up shelter but failed to save anything tangible. But here they were…constructing a house complete with a latrine and bathroom…this was like a dream to me,” she says. “By the way, they did this without me paying a penny…my sorrows have been wiped.”

The NGO plans to construct at least 159 house in the camp by the end of the year.