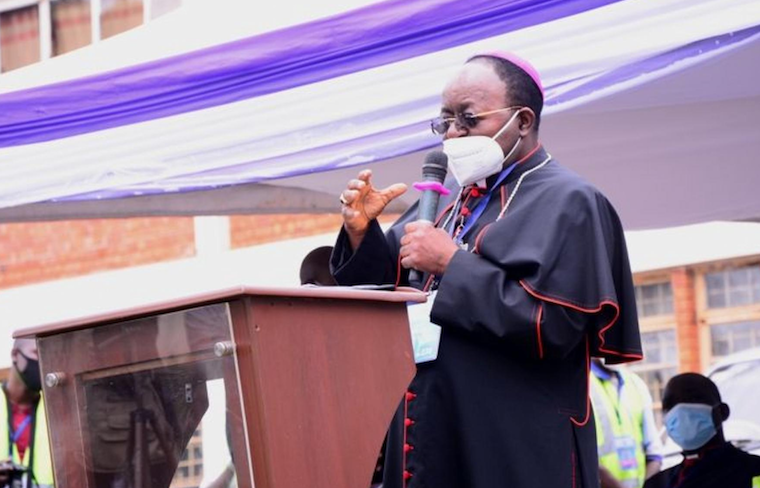 The archbishop of Kampala Dr Cyprian Kizito, 68, died of a heart attack, a postmortem report has ascertained. Lwanga was found lying lifeless in bed at his residence in Lubaga on Saturday morning and was officially pronounced dead by his personal physician at around 9:08 am.

His sudden death had raised questions with several people spinning conspiracy theories linking his demise to the mysterious death of other prominent clerics who have passed away in recent months.

Putting to rest questions over Dr Lwanga's death, the interim archdiocesan administrator Msgr. Charles Kasibante and the archdiocesan health coordinator Dr Andrew Ssekitoleko announced the cause of the death of the fallen prelate during his first requiem mass led by Kasaana-Luweero Diocesan Bishop Paul Ssemwogere at Lubaga cathedral today afternoon.

Reading a jointly signed document, Dr Ssekitoleko informed mourners that the body of the archbishop had been subjected to a postmortem at Mulago National Referral hospital to ascertain what had caused his sudden death.

He explained that the postmortem was conducted by a team of senior pathologists in presence of two family representatives and two physicians delegated by the church adding that at the end of the exercise, it was established that the archbishop had a heart attack due to a blood clot in the heart vessels.

Dr Ssekitoleko added that the finding is consistent with the previous history of illness that the archbishop had. Several reports had earlier indicated that the fallen prelate has for a long been battling hypertension and diabetic conditions.

Meanwhile, the programme of the burial of the archbishop has also been amended. According to Msgr. Kasibante, the government asked to pay tribute to the deceased - a request which has been granted - thus causing a change in the programme.

According to the new programme, the body of the archbishop will on Tuesday lie in state at Kololo airfield with the President Yoweri Museveni as the chief mourner. This event will be held from 10:00 am to 12:00 pm.

From Kololo, the body will be taken to Kyabakadde in Mukono district, the birthplace of the archbishop. At this place, Lugazi Diocesan Bishop Christopher Kakooza will lead a requiem mass and later the public be allowed to view the body with strict adherence to Covid-19 regulations.

On Wednesday, the body of the archbishop will be taken to Uganda Martyrs Shrine, Namugogo which is a more spacious place where people will be allowed to pay their last respects to the deceased prelate from 8:00 am to 9:30 am and later there will be a requiem mass led by the Bishop of Masaka diocese Severus Jjumba.

According to Kasibante, Lwanga will be laid to rest inside the historical Lubaga cathedral and will be the third prelate to be buried inside the church. The first prelate to be buried in there was Bishop Edouard Michaud, a Canadian clergyman who was one of the priest missionaries of the White Fathers. He was the vicar Apostolic of Uganda from 1933 until he died in 1945.

Inside the same church are the remains of Dr Joseph Kiwanuka, the first native African to be ordained a Catholic bishop in modern times who died in 1966 five years after his appointment as Archbishop of Lubaga.

The two are laid to rest on the right wing of the church just behind the area reserved for the choir. Kasibante says Archbishop Lwanga will on Thursday be laid in the middle of the two of his 'fore grandfathers’.

Msgr Gerald Kalumba, one of the senior priests in the archdiocese and former vicar general, notes that it is has been a tradition of the church to bury (Arch)bishops in the cathedrals they served.

“It is the tradition and in many times bishops who served in that particular cathedral are worthy of being buried in there,” says Kalumba.

He, however, adds that this might vary depending on other circumstances. “In some cases, if the (Arch)bishop left a will indicating a place where he wishes to be buried, his will is honoured,” he added citing the example of Emmanuel Cardinal Nsubuga who ‘humbled’ himself by making a will asking to be buried at the Bakateyamba Home which he founded.

According to information obtained from different catholic church sites, in many cathedrals, there are areas called crypts already set aside to bury the prelates. This concept of building crypts is said to have been drawn from the persecution of Christians and the believers who were buried in these caves when they died. The faithful have preserved this tradition to date.

In the event that the cathedral can no longer accommodate more graves, the administration of the (arch)diocese can locate another site to serve the same purpose.

For instance, two of the former bishops of Masaka were buried inside Villa Maria church (which was the first cathedral of Masaka before the relocation to Kitovu). However, when Bishop John Baptist Kaggwa died of Covid-19 a few months ago, there was no space for him and so he was buried in a cemetery chapel in Bukalasa Minor Seminary.

As reported earlier by The Observer, Rev Fr Edward Ssekabanja, the Masaka Diocesan chancellor, explained that they resolved that the said chapel should be the burial place for all bishops of Masaka and other bishops from outside the diocese that wish to be buried in Masaka.

+2 #1 Omuzira Ente 2021-04-05 23:15
During political Tamils church leaders are always under pressure either to defend the regime in power or side with the oppressed people. This is yet another DARK DAY for Uganda.

Bishop Kiwanuka died in 1966 during the crisis in Buganda. Archbishop Luwum's life was cut short by Idi Amin's greed for power. It came so soon, The country was yet to come to terms on what exactly lead to the death of Bishop Kaggwa.

The rate at which senior religious leaders are dying today raises more questions than answers. To a lay person the Doctors postmortem report may be seen as a formality.

Cardinal Nsubuga and Bishop Kawuma went through rough times during during Obote II as clergy's were being killed in execution of their duties.

While some people may think that youth these days are unruly but the biggest problem in Uganda are elders who grew up during Amin;s 70's . most of them never worked, they just inherited land and lack morals even at old age they can tell lies in search for money.
Report to administrator
-1 #2 kambarage 2021-04-06 04:38
Quoting Omuzira Ente:

Bishop Kiwanuka died in 1966 during the crisis in Buganda. Archbishop Luwum's life was cut short by Idi Amin's greed for power. It came so soon, The country was yet to come to terms on what exactly lead to the death of Bishop Kaggwa.
The rate at which senior religious leaders are dying today raises more questions than answers.

Stop creating fire where there's no wood because you will not sustain it. It is obvious even to a non-medic that the good Archbishop died of a heart related illness considering the events and activities he was involved in before the night of his death and his poor health the week before.

But NUP loyalists as usual want some drama and have been peddling this embarrassing narrative of 'more questions than answers' without any evidence.

It is annoying but truth always comes out. The clergy have done a thorough scientific investigation and announced the truth.
Report to administrator
+2 #3 Wainanchi 2021-04-06 07:28
Deepest condolences.to.the.followers at Rubaga cathedral and all who knew and respected this special bishop.

He will.be rememberwd as a special person, kind,and a Holly man.RIP in peace you amazing person

Was he a victim of corona? Many other priests have also, unfortunately, succumbed to corona because of close proximity of infected people and once infected because of their previous health problems like obesity,heart , hypertension they are prone.to. sudden onsalugjt of corona and blockage of arteries and hesrymMany many people today are dying because of this.
Report to administrator
+4 #4 WADADA rogers 2021-04-06 10:29
These men of "god" should check if indeed one of Lwanga's toes is missing, otherwise some of us are wondering why Lwanga who has been very critical of Government is being treated with a lovey davey state burial.

The catholic church is capable of meeting all the burial expenses, The Government should have only sent in a condolence message of about a billion shillings in a show of solidarity. The Church should insist on carrying out a second post mortem
Report to administrator
+2 #5 Rwatoro 2021-04-06 11:03
Is it a heart attack or State Attack?
Report to administrator
+3 #6 WADADA rogers 2021-04-06 14:08
We have been told of a postmortem exercise that was conducted in respect of Lwanga's death, just a few minutes ago, i saw a headline that Museveni had directed a further probe into Bishop Lwanga's death, is he also doubting or he wants to use the seconds report to silence those who may be commenting on the sudden death.

A clot is usually a result of something which no body has mentioned, for a man who has been critical of Government, anything is possible.

Bishop Odama of GUlu has let the cat out of the bag, he spoke to Lwanga that night, he did not complain of anything, not even fatigue. Some of us are not religious but we want to know. Rome should also be allowed to pick samples for another investigation.
Report to administrator
+2 #7 WADADA rogers 2021-04-06 14:26
i hear II will want to hear from Lwanga's doctors why the illness was not well managed leading to his death.

This is a contradiction, Museveni seems to be conceding that Lwanga died of the blood clot but at the same time he wants to blame Dr. Charles Sekitoleko's for not managing the Ischemic heart diseases.
Report to administrator