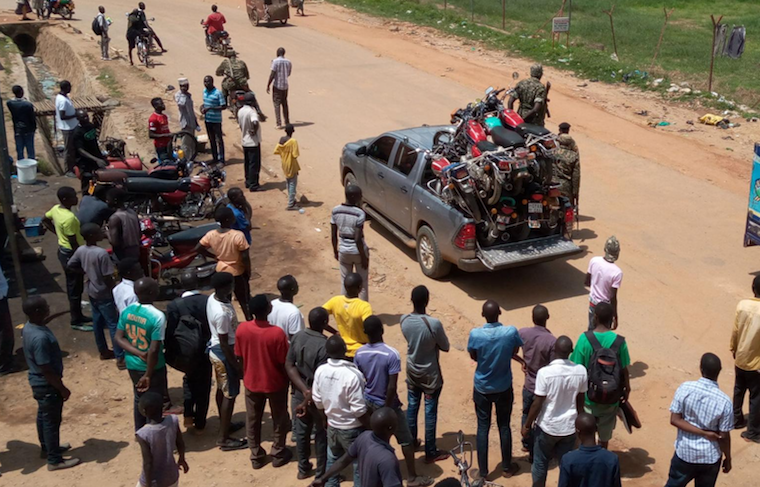 The residents ganged up against the duo on Sunday at around 7:30 pm near River Enyau bridge along Arua-Koboko road after they knocked down a suspected rice smuggler with their car leaving him unconscious.

Shortly after the incident, residents poured at the scene, disarmed the two enforcement officers and beat them into coma. The driver of the URA Double Cabin truck sped off when he saw the swelling crowd approaching.

Jude Nasucha, the Arua district police commander (DPC), says that two people have been arrested in connection to the mob attack while the search is ongoing for the other suspects. He warned residents against taking the law into their hands, saying security has the capacity to pursue them.

"You stop beating these people because if we want to punish you, we have the whole brigade here in Arua, we have another brigade in Koboko. We can surround you and all these villages," said Nasucha.

Several residents have since fled their homes for fear of getting arrested. Sam Edaruku, a resident of Yobuyia cell and an eyewitness, accused security of witch-hunting them, saying those who attacked the officers are not from their village.

"When civilians see the URA uniformed personnel coming home whether you have committed or not committed a crime, you will see the person taken away. Like the uniform which has been frequently been coming at my home since yesterday up to today, it is the uniform they fear most not of police. And this afternoon when they arrived at my home, the message they left was that they are going to come back on Wednesday which still injects fear in the family members and the village at large," said Edaruku.

Martin Oroch, the Arua resident city commissioner, says they will not rest until all those who assaulted the officers are brought to book. However, Geoffrey Feta, the Ayivu East MP-elect has condemned the alleged high handedness of the enforcement officers, saying their actions in the recent past have been provocative to residents.

"The use of excessive force by the revenue force has become a concern across the city. Recently drivers and the operations commander of URA, they hit a Congolese on a boda boda with a car and killed him and this has brought misunderstandings between authorities between Congo and Uganda. Hardly two weeks from this, now the excessive use of force again when the driver knocked a suspected smuggler. These acts are provoking the community," said Feta.

Four days ago, a Congolese national was reportedly knocked by a URA vehicle and died on the spot near Andelizu trading centre in Vurra County in Arua district. The deceased’s body is still lying at Vurra customs after his relatives refused to pick it.

Who says a suspected smuggler is supposed to be knocked. I hear Jude Nasucha, the Arua district police commander (DPC).

Otherwise, if we are independent equals before the same law/constitution, but there is open injustice by sections of the security agency; anarchy will begin to rais its ugly hydra heads. Hence random violence Mob Justice.
Report to administrator
0 #3 Mike 2021-03-30 18:06
Its so unfortunate however generally officers in Arua especially RPC, Regional CID and O.c station have been cited condoning such cruel acts on civilians in Arua which is provocative.

I think the beating was necessary and i think the URA officers were being paid in the same currency.

Who says a suspected smuggler is supposed to be knocked. I hear Jude Nasucha, the Arua district police commander (DPC).

There is just no room to mess around with cassava guts. They normally get away with it when they do the same to matoke guts.
Report to administrator