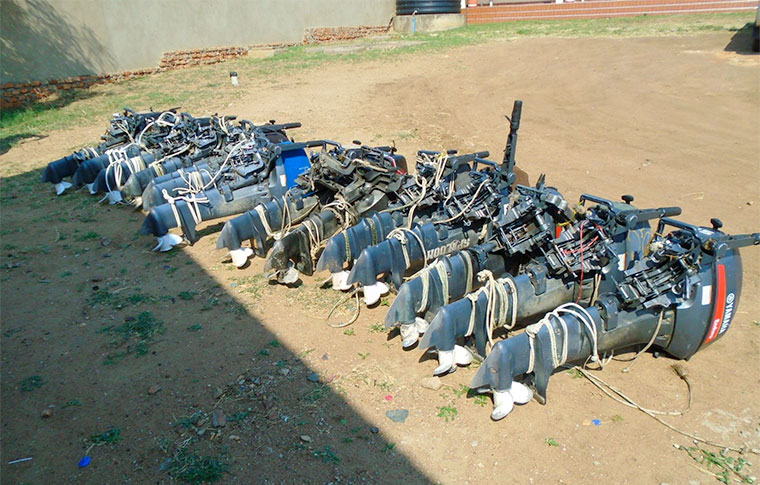 Congolese militiamen have released 6 of the 19 boat engines they stole from Uganda about two weeks after their owners paid them a ransom of $500 (about Shs 1.8 million) for each engine.

On March 21, the militiamen who were dressed in DRC military uniform raided Kaiso landing site on Lake Albert in Hoima in western Uganda and made off with at least 19 boat engines. After crossing over to the Congolese side of the lake, the militiamen start demanding a ransom of $500 before they could release the engines.

Fred Mujuni, the chairman of Kaiso landing site fishing community says 13 engines are still being held by the militia after their owners failed to raise the ransom money. Mujuni has appealed to the Ugandan government to intervene and compel the Congolese government authorities to ensure that the remaining robbed engines are returned at no cost.

Vincent Aliganyira, also a fisherman at Kaiso landing site wonders why government has up to now failed to intervene yet the fishermen are undergoing untold suffering. Julius Hakiza, the Albertine region police spokesperson says that security teams are already in talks with their DRC counterparts to have the confiscated engines returned to the affected fishermen at no cost.

They also robbed four fishing boats and four engines. The abducted fishermen were detained for a week at the Tchomia landing site in Bunia district and were only released after each paid $50 (about Shs 170,000).

Similar events unfolded in October 2020 when armed militiamen raided Lake Albert and abducted 16 fishermen, robbed 20 boat engines and 20 fishing boats. In April 2020, two suspected Congolese militiamen were gunned down on Lake Albert in Hoima district in a fire exchange between the militia and the Ugandan army.

The two, later identified as Ozelle Opio, 25, and another, only identified as Singa were part of the group that invaded the landing site near Kaiso in Buseruka sub-county where they put several Ugandan fishermen at gunpoint, ordering them to surrender their fishing gear including boats, fishing nets, engines and hooks.

But in the process, some Ugandan fishermen sneaked away and alerted the UPDF who rushed to their rescue. Before the UPDF soldiers could reach them, the suspected militiamen opened fire leading to a fire exchange between them and the UPDF.

The UPDF also recovered three AK-47 guns with 47 rounds of ammunition that the militiamen were using at the time they were rounded up.

One Amin had even renamed it Lake Mobutu, instead of Albert. The current regime has to pay a price to the Congolese in order to re-claim it. Not to mention because of the oil.
Report to administrator
0 #2 WADADA rogers 2021-03-30 08:23
When i say this country does not care about its people, many point a finger saying am being hard, now you can see what i meant.

What are the chances that these guys will not come back to pick these engines and then demand for more money.
Report to administrator