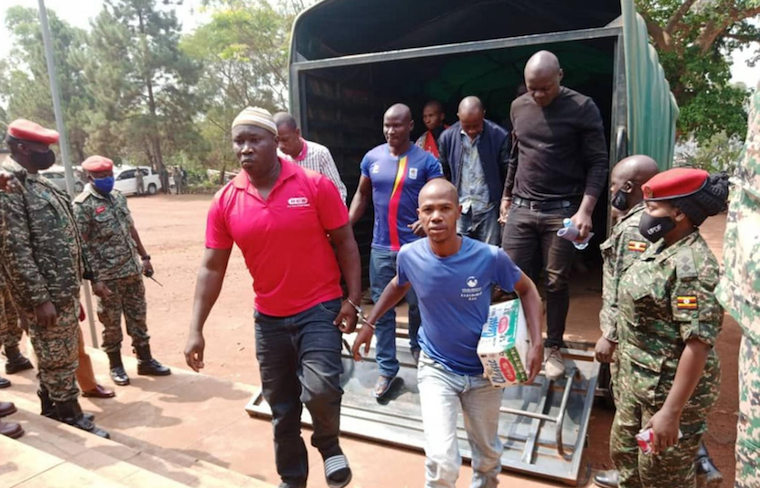 Some of the NUP supporters arrive at the army court

The High court has declined to hear the bail application for 36 supporters National Unity Platform (NUP) party supporters who are battling charges of illegal possession of military stores in the Army General Court Martial.

The suspects are part of 49 NUP supporters who were arrested during the campaign trail of the former NUP Presidential candidate, Robert Kyagulanyi Ssentamu in Kalangala district in December last year. They appeared before the Masaka chief magistrate after spending three days in custody, which granted them bail.

However, they were re-arrested and presented before the Court Martial for illegal possession of ammunition. On February 5, 2021, the Army court chaired by Lt. Gen. Andrew Gutti declined to release the accused on bail on grounds that they would continue perpetrating acts of violence once released.

The accused’s lawyers led by George Musisi filed another bail application in the High court on a number of grounds. They argued that bail is a constitutional right and that the accused had substantial sureties and permanent places of residence, which fall within the jurisdictions of the High court.

However, the deputy registrar of the Criminal Division of High court, Festo Nsenga has written to the suspects’ lawyer saying that they are unable to entertain their application.

“...We have studied both your pleadings and the Authority of Hon Michael Andrew Kabaziguruka Vs Uganda, HC/CR/MA/258/2016 attached to your letter above, and have concluded that since your application arises from a case before another court (the General Court Martial), and in view of our more recent decision of Haji Abdallah Kitatta Vs Uganda HC/CR/MA/43/2018 (that is available online), we cannot entertain your Application”, reads the letter in part.

In his March 3, 2021 letter, a copy which URN has seen, the registrar adds that their file has consequently been closed and that their pleadings returned. In Kitatta’s case, High court Judge Wilson Kwesiga struck off his application for bail on grounds that it had been filed before the wrong court.

The judge reasoned that “for any court to exercise its discretion to grant bail, it should be fully possessed with the facts and the circumstances obtaining at the pending trial”.

“I have also considered the views that the High court has unlimited jurisdiction overall the offences under trial however, bail is not an offence but a discretional procedural relief that is inter-locutory and the court handling the trial is the most appropriate to grant it after considering all the circumstances of the case as a whole,” said Kwesiga.

However, in an earlier case, High court judge Yasin Nyanzi granted Michael Kabaziguruka bail after the Director of Public Prosecutions (DPP) had declined to attend proceedings on grounds he can’t be a party to proceedings in the General Court Martial.

The judge held that a court cannot be approached by someone who is seeking justice and it decides to fold its arms more so when the DPP had not opposed the case.

Following the registrar’s response, the accused’s lawyer, George Musisi, said they intend to return to the head of the High Court Criminal Division to discuss some issues in the law before deciding their next course of action.

Don't forget that Uganda belongs to Museveni & it's Ugandans in posts terrorising their own for the demon who is assured of 40 years of rule!

Tax payers are assuring the money is there to be used by the evil government!

Why is the divisive tribalistic system that disempowers Ugandans & leave every tribe at the mercy of Museveni, still in standing?

Without UNITY to end Museven'is evil rule, Independent Tribal States will lock Museveni out of every tribal land.

Then who from which tribe/s will terrorise Ugandans for Museveni?

Why are Ugandans keepingn Musevnei in power, knowing the outside world will watch in silence as long as the tribalistic system stands?
Report to administrator
0 #13 Akot 2021-03-08 18:22
kabayekka, understood, but,

The will of Ugandans will only be accepted if the people end the tribalistic system & UNITE to say NO to Museveni who put it in place & Ugandans go along with!

When Museveni is thrown out in UNITY, Ugandans will have to go for the kind of governance they want & begin to build the democracy they want, step by step!

Who are those in army/police, court, arresting, imprisoning, Ugandans to assure no opposition to Museveni?

Ugandans MUST end Museveni's rule in UNITY as ONE PEOPLE because he owns Uganda & the laws serve him & not Ugandans!

While Museveni is assured of 40 years, what do Ugandans live for while assuring the demon's rule by fighting one another, thus assuring their own destruction?

Museveni is Uganda & Uganda is Museveni & this will be so untill Ugandans decide otherwise, in UNITY!

Why does Uganda formed by Ugandans' tribal lands belong to Museveni & what will be the situation when Museveni dies?
Report to administrator
0 #15 Akot 2021-03-08 18:39
Quoting Kirya:

m7 has no heart and does not respect human life. The little god decides who lives and dies.

Fellow native we have to participate in the liberation of our country. Enough is enough. Stand up for freedom

Just tribal leaders standing down/forced to & UNITY is all Ugandans need to block Museveni & have him arrested immediately!

Museveni MUST not be left to die in office of old age, MUST not be allowed to steal a plane & flee as Idi Amin did!

Idi Amin used Sudanese to terrorising Ugandans & they left in a hurry when he abandoned them!

Ugandans in posts terrorising their own for Museveni will have to be brought to justice, alongsides their boss Museveni who's rule MUST be brought to an end NOW!
Report to administrator
0 #16 Akot 2021-03-08 18:46
Quoting Omuzira Ente:

Those in Judiciary need to be reminded that their colleagues in Somalia have No similar jobs in their own country simply because those who were entrusted to uphold the Law feared the Dictators and failed to save their county from the current chaos.

By upholding a military JUNTA and equating it to high court is simply an abuse of office and lack of seriousness on behalf of the judiciary.

Many educated people tend to think that they will simply run into exile when the country is on fire forgetting that they will never sustain their families in exile.

We all need to work for the good of this country by respecting all lives and administering fare justice to all both the rich and poor.

Protecting one another begins with bringing down the tribalsitic system & UNITY to end Museveni's rule NOW!
Report to administrator
0 #17 kambarage 2021-03-08 21:00
Quoting kabayekka:

The cost of upholding the law can escalate my friend Kambarage,

Surely the best way to uphold a law is more so by examples. How can one reinforce a law when you do not obey or uphold it yourself?

Well...if arresting law breakers and their evil cells is unlawful then I choose it and answer the charges later.

Hmm...promoting criminality is when we allow misled young people to attack innocent civilians, beat up security personnel, burn tyres, disrupt business and threaten innocent civilians of specific social identity because the cost of keeping them in prison is high!

The best option is isolate and educate...and that is what will happen regardless.
Report to administrator
0 #18 kambarage 2021-03-08 21:16
MATO PUT might be a better way out, although that would need a Ugandan Mandela to try that path.

Study what you guys did up north because the same might be heading your way this time. (4) etc

Drums of war...but no problem. The population of Uganda will deal with the war when you introduce it.

Your guy won where he was popular ...now use these five years to mobilize support outside Wakiso Kampala bracket. Forget about a successful bush war. The world has long moved on.

People have businesses to mind, children to take to school...no one will die for selfish leaders building mansions and buying super expensive cars out of chaos and lies to their sponsors.

Vote the guy out if you want him out and don't create excuses when you lose...just retreat and strategize for the next round. Or conduct legal political activities...war will benefit nobody even those who are supporting the idea from abroad will lose relatives. No deal here
Report to administrator
0 #19 kambarage 2021-03-08 23:25
Quoting kabayekka:

But in all honesty, were Kyagulanyi's votes stolen? This guy had no agents, no candidates in many parts of the country and the few who initially supported him crossed to other camps citing selfishness and discrimination in allocation of resources at NUP head office.

You saw them on TV. Kyagulanyi won where he was popular. He lost where he wasn't. He lost his Arua base and could not sell elsewhere because of the shift to Buganda nationalism and the shock of seeing catholic priests in central Uganda discriminating against some sections of their followers (on TV).

Sadly, his campaign was hijacked by radical conservative elements who scared potential support especially from the north. So sit back and re-strategise for 2026...that's the decent thing to do now.

Let's be realistic and honest, Kyagulanyi's lamentation is just to save face and confuse diaspora and his external sponsors.
Report to administrator
12