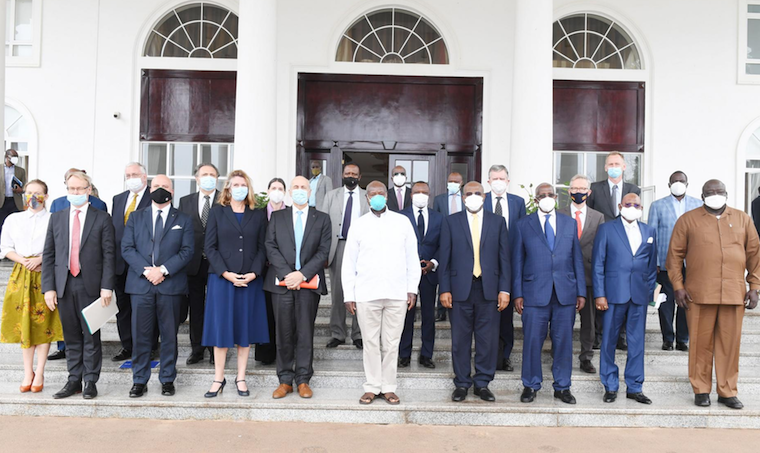 Museveni with the EU envoys

Speaking on Thursday at State House Entebbe while meeting EU envoys led by their head of the delegation, Ambassador Attilio Pacifici, Museveni said such interference in the past caused a lot of problems in some African countries.

“By involving yourselves in matters that you don’t understand, even if you do understand, you should not get involved because this kind of misconduct can lead to many serious consequences and suffering of the people like it happened in some African countries,” Museveni said.

Museveni’s meeting with the EU comes just a day after Foreign Affairs minister Sam Kutesa responded to the European Union’s parliament’s resolution to sanction Uganda over what they called continued attacks on human and political rights.

The EU delegation in Uganda has also expressed concern over how the recently concluded elections were organized. The ambassadors two weeks ago also met with Robert Kyagulanyi Ssentamu, Museveni’s close challenger in the January 14 general election.

In a statement released by State House, Museveni asked the envoys to always consult with government officials in case they want clarification on any issues.  He promised to share with them a report on the investigations being carried out by security agencies following the November 2020 riots in Kampala and other urban areas which led to the death of more than 54 people.

Museveni said Uganda and the European Union are not adversaries that should work at close purpose but should focus on strengthening their shared goals.

“For us, we don’t see you as enemies, remove all the diversions and concentrate on the shared goals and help one another for the prosperity of our people,” Museveni said.

Museveni also expressed reservations about the recent EU parliament resolutions that called for sanctions against Uganda saying even if Uganda signed and ratified different human rights agreements and treaties, it doesn't take away its sovereignty. Adding that countries should be treated as partners in case there are violations of these agreements and no country should take itself as a supervisor of the other.

The government has received billions of dollars in economic aid for budget support and development aid yet Bwana Rais - the president has the guts to pick a quarrel with the EU donors over the human rights abuses for which the citizens of the world are seeking an explanation.

EU citizens want to know why their hard earned money is given to a brutal regime that terrorises its own citizens; yet his excellence decides to escalate the situation -inviting further scrutiny to the bankrupt regime that owes $11 billion to this international community, not to mention the interest payments.

Yet unashamedly the president is calling for the debt forgiveness at the same time berating for donors for politely telling him to respect the human rights of his fellow citizens ie to stop being Mukaajanga- the martyrs’ killer.
Report to administrator
-1 #22 Wainanchi 2021-02-20 19:33
@ Also...You have.only two options left.now make up your mind now !

Has this country got the money for the medicine and vaccination to fight off this plague. Because surely the opposition has been beaten to pulp not to campaign to the public under a scientific national election.

Under which it is clear to every one that the election was badly violently organized in the internal affairs of this country!
Report to administrator
-1 #24 Lysol 2021-02-20 22:32
Quoting Wante Martino:

That was a good photo op. Those EU ambassadors (excluding the UK) know what they are doing.

Killer Museveni can not blackmail them because he needs them more than they need him. Why not expel them and declare them persona non grata. Who is calling the bluff here? What a joke!

No Lysol, actually EU needs Mucebeni MORE, what the hell are they trying to do, they KB and he flatly refunsed their Deal, next was BW, who me thinks they felt he could not deliver on the Deal so they try the Jjajja!

Learn to write correct English. I can see that your comment deserves no response. Imbecile.
Report to administrator
-1 #25 Lysol 2021-02-20 22:48
Quoting Santos John Labeja:

Museveni knows that those Europeans boosted his facilities during his infamous bush war in Luwero, to the extent of housing his family in Sweden.

He is fooling himself by trying to lecture them as he does to his mediocre NRM cohorts. The resolution of European Parliament is clear - sanctions on those involved in human rights violations. If he is involved, then be it.

Had it not been for Sweden and the UK supports, Musveneni would have been history long ago.
Report to administrator
123