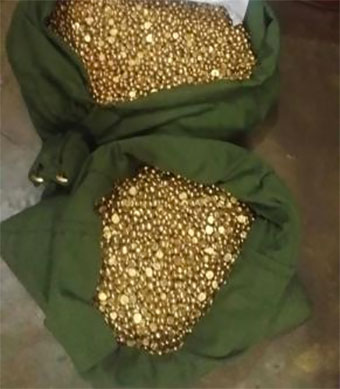 The Criminal Investigations Directorate (CID) has charged two police deserters accused of conning $6m (about Shs 21.9 billion) out of an American national, Anastasios Belesis in a gold scam.

Former police constable Martin Bwayo alias Capt Bob and his alleged accomplice Enock Katwesigye alias Col Frank, according to Belesis, masqueraded as senior UPDF officers who transact gold on behalf of key government officials. Belesis, in his statement at CID headquarters, Kibuli, said his woes started last year when he met a one Charles in Kenya who convinced him that he knew Ugandans who sell genuine gold and in large quantities.

Belesis has since identified himself to detectives as a minerals dealer from the United States, a business he has traded in for over two decades. The 46-year-old said he travelled from the US to Kenya in 2019 to purchase gold but did not succeed. As he was planning to fly back to the US, he met Charles who befriended him and later told him about available gold in Uganda.

“Charles gave me the contact of Capt Frank [Bwayo Martin] who I later met when I travelled to Uganda. Capt Frank told me he deals with only registered and recognized mineral companies. He told me to register my the company, acquire a license from geological minerals department, a certificate from Uganda Revenue Authority and National Social Security Fund,” Belesis said in a statement.

After providing the list of requirements that Belesis needed to meet before he started gold transactions, Bwayo told him that the registration process would take almost two years but in order to speed up the process, Bwayo introduced him to Katwesigye, who told him that they needed about $3 million which he allegedly paid. He was later charged $2.5 million for hiring an office at Mukwano Courts and recruiting some workers.

“I paid the money hesitantly but I was convinced I was dealing with genuine people since they asked me to meet all these procedures. They took me to where gold was being sold. I examined five kilogrammes of gold which were all genuine. They told me that they had over 800 kilogrammes of gold and they were willing to sell it to me,” Belesis added.

After testing the gold, Belesis gave Bwayo and Katwesigye an additional $1.25 million But to his surprise, seven armed men dressed in military-like attires intercepted the box body truck in which the gold had been loaded. The armed men, Belesis said, claimed to have been sent by a government security agency because they had been tipped about an unlawful gold transaction. Katwesigye introduced himself to the seven armed men as a UPDF colonel and he was saluted.

“Col Frank told me he was engaging the security men so that they could allow me to take my gold. He engaged them on the side and he later told me they had refused. I was asked to pay $750,000 more, but I became suspicious of endless expenses,” Belesis said.

It was at that point that Belesis’s friend told him to file a case at CID headquarters. The case was entered on GEF 086/2021. Fraud and money laundering detectives were assigned by CID director AIGP Grace Akullo to trace the culprits.

The investigations led to the arrest of the two police officers and CID spokesperson, ASP Charles Twine, said detectives are now looking for other suspects who masqueraded as soldiers and hijacked the gold truck.

At the time of arrest, ASP Twine said the genuine gold has gone missing. Police have encouraged investors to avoid concealed transactions in order to avoid being duped by fraudsters. Police are now looking to attach the property which purchased using conned money.

Maybe they should stay in the USA so their delicate are not hurt.
Quote | Report to administrator
12
Refresh comments list
RSS feed for comments to this post
Add comment