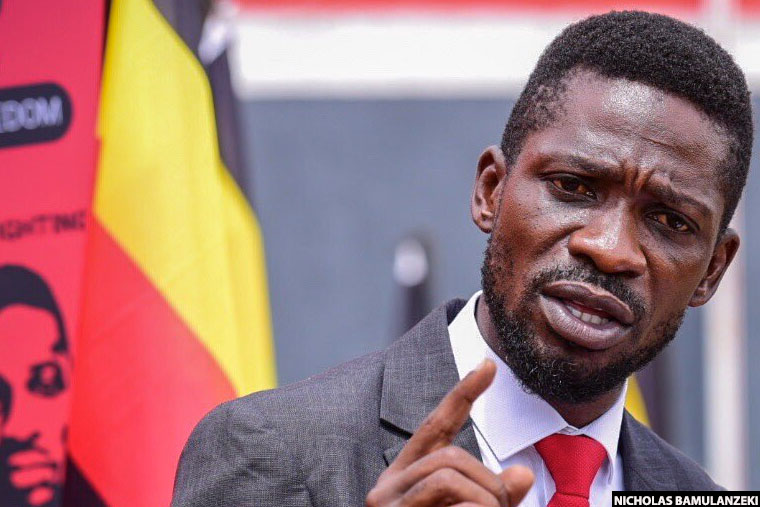 National Unity Platform (NUP) president Robert Kyagulanyi Ssentamu aka Bobi Wine has threatened to withdraw his election petition from the Supreme court over alleged bias on the bench.

Speaking to reporters at the NUP headquarters in Kamwokya on Tuesday for the first time since they were besieged on January 14 by the police, Kyagulanyi said the Supreme court has shown an unprecedented level of bias against him and their close relations to the first respondent President Yoweri Museveni whose reelection victory he's challenging.

He said some of the nine justices set to hear his election petition including the chief justice, Alfonse Owinyi-Dollo, Ezekiel Muhanguzi and Mike Chibita can’t be independent jurors because they have in the past worked closely with Museveni.

"We want the chief justice not to be part of this hearing, not just the chief justice, there are other justices of the Supreme court. People like the hon. Mike Chibita who we all know was a private secretary for legal affairs in Mr Museveni’s office for seven years. We also know that the hon. Ezekiel Muhanguzi is a relative to Gen Elly Tumwine - a person that the national and international community has castigated for abuse of human rights, a very very powerful regime apologist has a relative who is going to determine the fate of his boss. So we join all voices that are demanding for them to recuse themselves from hearing this case because we don’t expect to hear any justice from them," Kyagulanyi said.

On Monday this week, city lawyer, Hassan Male Mabirizi filed an application in the Supreme court asking the chief justice to recuse himself from the case because he was Museveni’s defense lawyer in 2006 when he was sued yet again over another disputed election by opposition Forum for Democratic Change (FDC) candidate Dr. Kizza Besigye.

Asked whether he supports Mabirizi’s petition, Kyagulanyi said he welcomes any efforts by anybody to challenge Museveni’s victory in court. He, however, clarified that any concerns they have will be raised by what he called a robust legal team of his party.

Kyagulanyi also complained about the decision by the Supreme court to decline to grant him leave to amend his petition. He said this exposed it as a biased court because in the past, the same court has allowed presidential petitioners to amend their petitions or introduce new evidence in the middle of the hearing.

Kyagulanyi also said he was not satisfied with the court decision denying him a chance to file more affidavits claiming that he was out of time. The NUP president also wondered why the court would only have an open hearing for one day instead of following the precedent it had set by hearing arguments from the petitioner and the respondents for weeks.

This all, he said, is testimony that the court is not fair towards him. Asked why he’s lamenting about the unfairness of the court now, yet in the past, he has publicly stated that he didn’t expect justice from the Supreme court because it’s another of Museveni’s tools just like the Electoral Commission, Kyagulanyi said amidst those fears of bias, he expected them to do their job of dispensing justice.

Kyagulanyi said he has asked the party’s lawyers to make a formal application to the court laying down their demands that the court must obey or they withdraw their case. Antony Wameli, one of the lead counsels of Kyagulanyi declined to say whether they have such instructions or not.

“Can you talk to counsel [Medard] Sseggona or party spokesperson Ssenyonyi?” Wameli said. Our efforts to speak to Sseggona who is the lead lawyer for the petitioner were futile as he didn’t answer our repeated calls to his known number.

A fake MDD diploma holder trying to square up the most learned person in Uganda is not only hilarious but also stupid and delusional of the highest order.

... This will not happen even if it means a small civil war to reed Buganda of idiots. I urge the Supreme Court of Uganda to stand their ground and then we see which Ugandans Kabobi Swine wants to file his frivolous petition to. Komanina Kabobi Swine. Shenzi kabisa!!!!

But Mama Nonsense, where were you when Wole Soyinka described, how low and inept is the intellect of our "Problem of Africa", Gen Tibuhaburwa.

In other words, you are freaking out. Calm down and start parking your stolen clothes and suitcase and leave town.

If you don't you may not figure out which way you came from since you last came to Uganda/Kampala in 1959.
Quote | Report to administrator
0 #13 Mama Mia 2021-02-18 14:39
But Mama Nonsense, where were you when Wole Soyinka described, how low and inept is the intellect of our "Problem of Africa", Gen Tibuhaburwa.

In other words, you are freaking out. Calm down and start parking your stolen clothes and suitcase and leave town.

If you don't you may not figure out which way you came from since you last came to Uganda/Kampala in 1959.

Of course I know you are suffering from inferior legs complex with sand and rocks up the top and that is why you scream like a pig hit with an axe on the head.

This greatly reduces your ability to grasp the content of an article like this one here. Kabobi Swine is rejecting his lordship purely for being a northerner and you are here shaking your sticks.

This greatly reduces your ability to grasp the content of an article like this one here. Kabobi Swine is rejecting his lordship purely for being a northerner and you are here shaking your sticks.

Wole Soyinka is on his death bed and baby pampers 24/7 and his wisdom can no longer be relied upon. Ushenzi na ujinga!!!!!

But Mama Nonsense, why does Gen Tibuhaburwa move around, towing along a mobile toilet? Just asking.

And I told you that my legs are not as dry as those of Ms. Balinda, the former Kawukumi who almost brought Bank of Uganda down. Am not a tribalist, like you; Owiny Dollo is a mulebesi.
Quote | Report to administrator
0 #15 Tum 2021-02-20 08:39
The statements of RSK on the court and judges were either naive or ill-timed or meamt to intimidate and the outcomes are clear.

Segona and Wameli should rein him in until the case is disposed off. Segona knows very well what he went through, trying to deflect off his boss' threats to judges.

Judges are human beings like RSK and get hurt by unsubstantiated attacks. That they worked with Museveni. Look around RSK confidants and tell us how many have not worked with him ir with the system?
Quote | Report to administrator
12
Refresh comments list
RSS feed for comments to this post
Add comment