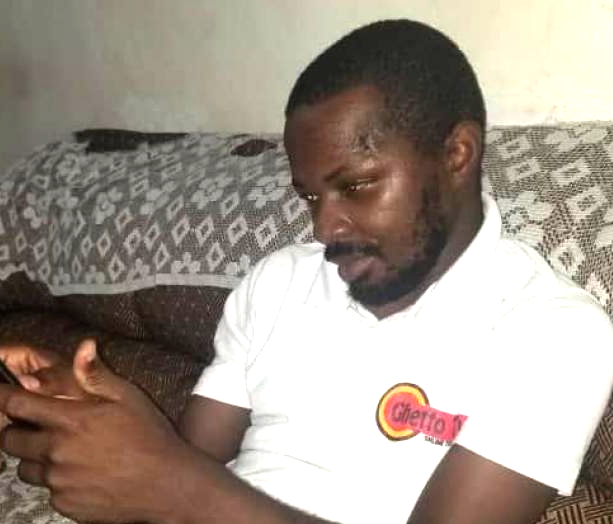 The morning of December 27, 2020, was like any other daybreak for Ashiraf Saif-Allah Kasirye, a reporter working with and for Ghetto Media, an online, TV affiliated to National Unity Platform (NUP) former presidential candidate, Robert Kyagulanyi Ssentamu.

By December 27, Kyagulanyi aka Bobi Wine had spent 47 days traversing the breadth and width of this country convincing Ugandans that he was the best candidate to end Yoweri Museveni’s 35-year grip on power as president of Uganda.

That morning, Kyagulanyi together with the Masaka municipality MP, Mathias Mpuuga Nsamba and other politicians in the Masaka sub-region, woke up very early to attend a church service at Our Lady of Sorrows, Kitovu cathedral. Ashraf, as he’s fondly known by colleagues, didn’t go to church but waited for the group at Mpuuga’s home located in Soweto, Masaka city.

At around 11 am, the service was over and the team was ready to start the day’s campaigning schedule that would have seen them going to Lwengo and Bukomansimbi districts. As had been with almost all the places Kyagulanyi had campaigned in, there was a standoff between the security made up of the police, UPDF, and the LDU officers among others.

Ashraf had followed Kyagulanyi all through his campaign trail, save for a few days when he was pepper-sprayed during a campaign in Luuka district. He had covered such standoffs, and at the time and Ghetto TV would be the point of reference when one wanted to follow the trail online.

The standoff in Masaka wasn’t any different. He recorded whatever was happening at the beginning of the standoff, and his thousands of followers kept on praising him for the bravery in the live commentary. Not even once did he think that in a few moments he would become the main story of the day. As the bullets and teargas raged and raved, one of them reached for Kasirye’s head, immediately sweeping him off the slowly moving vehicle in which Kyagulanyi was seated.

That was the end of the standoff. Many pronounced him dead as he bled profusely. In fact, one of the people who were in the car with Kyagulanyi told URN that he [Kyagulanyi] called the secretary general of his party, David Lewis Rubongoya and told him they had lost Ashraf. This person said a teary Kyagulanyi couldn’t figure out what to do next. Ashraf was so close to him more than many of the army of bloggers who moved with him.

Ashraf was rushed to Masaka regional referral hospital for first aid and a few hours later was evacuated to Lubaga hospital in Kampala for specialized management. Until one week ago, Ashraf wouldn’t remember a thing about the incident. He had total amnesia; the only people he could remember were those who were very close to him in the days leading to the incident. He just can’t believe how lucky he’s to still be alive.

On January 14, when he left the hospital to go to Nansana and vote for Kyagulanyi, he was struggling to speak anything coherently. His tongue was so slurred that you would struggle to understand what he was saying. It’s about a month now, and the story is different. Although he still has some lapses, he is now in command of about 85 per cent of his memory.

This reporter visited him at his home in Nansana and he was upbeat about total recovery. He can relay his story up to when he was shot. Asked about that incident, Kasirye said it never crossed his mind even briefly that at one point he would become the news subject.

"The only thing that was running through my mind was that people are going to be shot, and not that we're going to be shot, you understand? I always thought I was always covering everything of police officers shooting bullets or teargas at Bobi Wine supporters. I never thought that it would come to me. I always told my fellow journalists to be careful, I never thought it would come to me," he said.

Asked about the danger he was exposing himself working with an organization that is linked to a politician who had become a major target to security, Ashraf said he believed in Kyagulanyi and wanted to make a contribution to his campaign.

“I had just been given a new contract where I was working, but my heart was telling me I needed to help Kyagulanyi with my skills in journalism. I know there is no media house in Uganda that would dedicate the whole day to covering him yet I needed people to see whatever was going on,” Kasirye said.

He adds that he recognizes the work that politicians like opposition doyen Dr Kizza Besigye have done in trying to cause a change in Uganda but they were constrained by the limited media coverage.

“Kyagulanyi’s brand has been helped very much by the media that covers him everywhere he goes. I looked at Ghetto Media as one of those outlets that must give him coverage that traditional media would not. That’s why I put everything on hold to go out and help in that regard because we needed to show the world how this government was treating those who come out to oppose it. By the way, we also exposed Uganda to the world because wherever we would go and it's peaceful, we would show the world how we are endowed naturally,” Kasirye says.

Kasirye says that he is grateful that he has lived to tell his story, and when he looks at the videos and pictures of himself moments after he was shot at, he can’t believe that he’s still alive.

Kasirye says what happened to him is a temporary setback to his aspirations of seeing Ghetto TV turn into a major brand to reckon with. He says although he’s still recuperating, he’s only worried about whether he will be able to do his work like he used to do it before the incident.

“The brain tells me that I can write again but sometimes what the brain tells you is different from what you can actually do. I have not tried to use the computer again to see whether I still remember how to write. But I hope to start writing; will you read through what I have written to see whether I’m writing sense?” Kasirye asked the author.

Kasirye is also thankful to Kyagulanyi and the NUP for not forgetting him when he was at his lowest.

“They have paid my hospital bills which were over Shs 30million, that is not a small thing especially when you have become useless.”

And yet REMASE continues to ignore your effort by suggesting that Ugandans are doing nothing. NEERA NEERA NEERA, NUP PAKA LAST.
Quote | Report to administrator
+2 #2 WADADA rogers 2021-02-13 09:24
Dont worry Ashraf, one day we shall also torture them, they will lose their teeth and their eyes, we shall cut off their ears and balls. we shall have the lost laugh
Quote | Report to administrator
+3 #3 Ronnie 2021-02-13 11:56
Welcome back Ashraf. Praise God you are back. Wadada, you don't have to do that.

Yoyou'll be just like them. They will fall on their own swords. They have forgotten that if you live by the sword you die by the sword.
Quote | Report to administrator
+2 #4 Wooden K. 2021-02-13 14:51
Some dare nothing, and hope for everything.

Ashraf. You dared to march to hell for heaven`s sake.
God is great !

"When I despair, I remember that all through history the ways of truth and love have always won. There have been tyrants, and murderers, and for a time they can seem invincible, but in the end they always fall. Think of it--always".

This is a good case for the Human Right activists all over the world to hold the military junta regime accountable.

Lysol, the irony with our Junta is that e.g., a few days after the 18-19th November 2020 massacre, the Junta and number of our Principals of major religious denominations in this country held a "Thanks Giving Prayer" in our State House".

I am still wondering what they had to thank God for, especially at the time when hundreds of Ugandans families, friends and relatives were burying, mourning and desperately looking for their missing loved ones in different hospital mortuaries, Police Stations and/or Posts.

In other words, we continue to live in a heartbreaking country called Uganda.
Quote | Report to administrator
Refresh comments list
RSS feed for comments to this post
Add comment