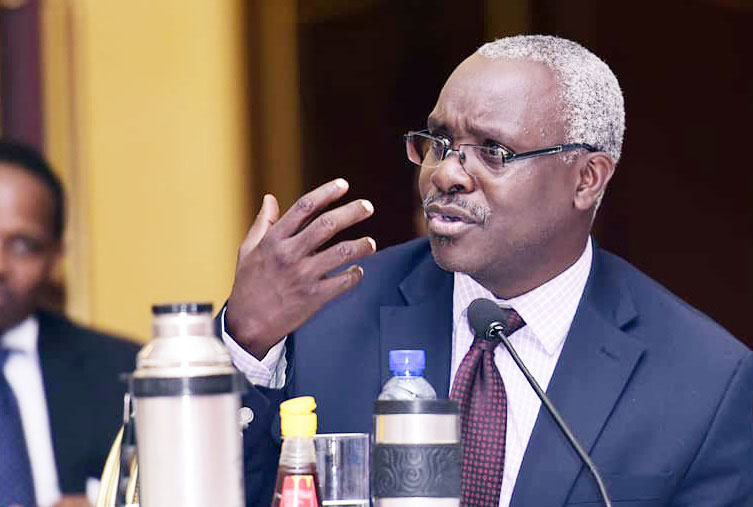 All is not well at Vision Group, the state-owned media empire that owns New Vision newspaper.

What started as a simple misunderstanding has escalated into a full-blown war pitting several staff against one another. Last week the feud claimed its first scalp, long-serving CEO Robert Kabushenga who was sacked by President Museveni.

According to sources within the Vision Group who declined to be named to speak freely, the situation at New Vision, the cash cow of Vision Group, is so intense. Several heads may roll in the coming few days because junior staff are fighting management over the new performance contracts they are being forcibly asked to sign while the race to succeed Kabushenga is attracting more intrigue by the day.

END OF 14 YEARS OF KABUSHENGA

On the afternoon of January 28, Kabushenga was going about his work at New Vision when a call came through to his office.

The voice at the other end was Patrick Ayota, the New Vision board chairman, who broke the news that he had orders from President Museveni to sack him immediately. Ayota did not divulge details but offered Kabushenga the opportunity to break the news to staff and advised him to prepare a smooth exit within 90 days.

A panicky Kabushenga, bewildered and in disbelief, rushed out of office to get in touch with his allies closest to the president. According to our source, he reached out to first son Lt Gen Muhoozi Kainerugaba and urged him to persuade President Museveni to change his mind.

When Muhoozi indicated that he could not do much at that moment, Kabushenga resorted to Odrek Rwabwogo, the suave son-in-law to the president, to plead his case. Yet again, Rwabwogo failed to reach the president.

The following day, Kabushenga scheduled a meeting with Ayota in a last-ditch effort to save his job. However, at around 10 am, the New Vision official handle briefly tweeted that Kabushenga had taken early retirement.

“Kabushenga will oversee a 90-day transition, as requested by the board, before moving on,” read the statement.

That served as the bitter end of the road for Kabushenga as Vision Group CEO and an hour later, Kabushenga also tweeted about his ‘early retirement’ to bring down the curtains over his 14-year reign. The events that led to his sacking and the aftermath have created a tense situation at the country’s biggest media organisation with several twists and turns.

Kabushenga’s tenure at New Vision has been far from smooth since he took over in acrimonious circumstances in 2007 after government forced out William Pike, his predecessor. He has survived several attempts to uproot him, particularly in 2015 when several members of cabinet accused him of clandestinely working with former prime minister Amama Mbabazi after the latter fell out with President Museveni.

It took the intervention of his close allies minister David Bahati and Asuman Kiyingi to persuade President Museveni not to swing the axe. Later that year when the New Vision salary structure leaked to the Committee on Commissions, Statutory Authorities and State Enterprises (Cosase), exposing the lion’s share of the wages the few top bosses were earning, Kabushenga was able to quell the discontent amongst employees.

But over the last few years, he had become increasingly vulnerable, especially after some members of the board recommended his sacking on grounds of expanding the Vision Group with amorphous entities that made losses. According to our sources, those against Kabushenga had lined up Simon Kaheru, a renowned media consultant with close ties to the state, to take over but the move aborted when the latter was appointed to head the UBC board.

When the Covid-19 lockdown hit several businesses last year, Vision Group was not spared and it prompted Kabushenga to downsize the staff structure. Some staff were told to work from home while many others had their salaries cut by as much as 60 per cent.

This sparked an uproar amongst staff, some of whom are directly connected to State House and other top powerbrokers within the country. Led by Ben Omoding, who once worked with Kabushenga while at the Uganda Media Centre, they petitioned President Museveni who in turn reversed Kabushenga’s decision.

The president, according to our sources, warned Kabushenga against firing any person, especially those that had been singled out as the ringleaders.

However, the post-lockdown situation offered Kabushenga another chance to reorganise the Vision Group setup. He introduced a new structure by amalgamating all Vision Group media platforms into one whereby several editorial positions were rendered redundant while reporters were required to file stories for print, online and broadcast.

The only unaffected individuals are Barbara Kaija, the New Vision editor-in-chief and head of content Felix Osike. So, after collapsing several senior editorial roles, Kabushenga created new hub managers to handle the situation.

For instance, the reforms saw Bill Tibingana take over as head of the print and broadcast hub while the entertainment hub was placed under Michael Owori, popularly known as Bush Baby. However, among the senior staff affected was New Vision editor John Kakande, his deputy Cathy Mwesigwa and news editor Hellen Mukiibi.

The titles of Kakande and Mukiibi changed to producers and were placed under the supervision of content editor Felix Wasike while Mwesigwa was transferred to the human resource department. According to our sources, Kabushenga’s action was viewed as a purge of some staff but elevating his loyalists at the expense of experienced staff.

This further brewed discontent and intrigue as staff fought for influence and control. In this tug of war, several staff singled out Kabushenga as the source of conflict and several petitions were sent to State House.

According to sources at State House, President Museveni, who had already been briefed about Kabushenga’s close association with the Democratic Governance Facility – a multi-donor establishment that was portrayed as working with the opposition – ordered Ayota to immediately fire Kabushenga to restore sanity at Vision Group.

Meanwhile, Kabushenga’s transition phase may not be quiet as some had expected. Early this year, he sent out a memo cancelling all permanent contracts for staff and instead introduced short ones ranging from one to three years.

In fact, all staff were given up to February 10 to either sign or be fired but some, according to sources, have refused to sign the new contracts on grounds that the entity must first pay their terminal benefits accrued from the cancellation of their status as permanent staff.

In fact, The Observer has seen a copy of some contracts for junior staff that have no gratuity clause. Among other clauses, management has also barred staff from working for any other media house in the country and the region even when the contracts elapse. So, when the staff ganged up against the new measures, Osike addressed the human resource manager, Gloria Kaitesi, who in turn called a staff meeting on February 9.

The Observer was not privy to the outcome by press time but staff are demanding payment of terminal benefits and the deletion of unfair terms. When we reached out to Kabushenga, he declined to comment. Meanwhile, Ayota said he was busy.

According to sources at State House, President Museveni is still vetting individuals interested to replace Kabushenga. The two frontrunners, according to sources, are Kaija and Gervase Ndyanabo, the deputy managing director and company secretary.

Sources add that Uganda Media Centre boss Ofwono Opondo and Rose Namayanja, the NRM treasurer, have put in strong cases to be considered.

More a government enterprise run by boards paid for by the taxpayers' money.

Good that this journalist of a manager can now go to his famous farm and try to earn difficult money in business sense.

In other words Kabayekka, in the real world, without other source of income; farming is not an Al Kabushenga Showbiz or a joke.

One can easily lose his/her shirt/skirt at the blink of an eye.
Quote | Report to administrator
12
Refresh comments list
RSS feed for comments to this post
Add comment