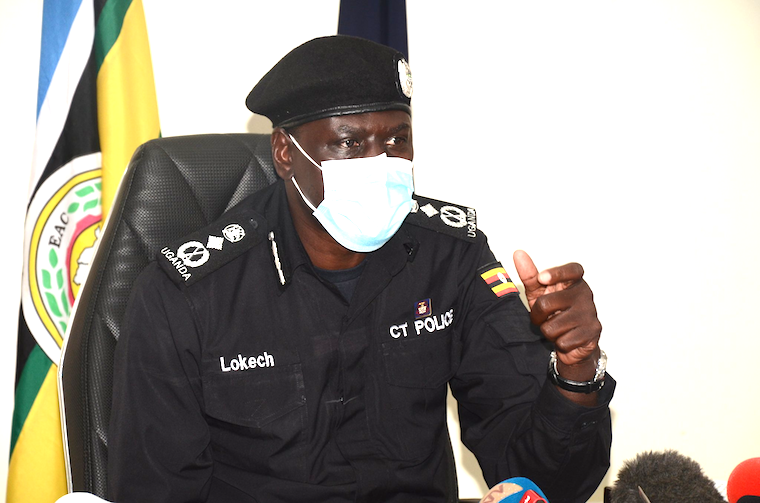 The order to the Crime Intelligence director, Brig Gen Chris Damulira and his Criminal Investigation Directorate boss AIGP Grace Akullo comes in the wake of an ongoing public outcry about operatives abducting people from various parts of the country.

Since the November 18 riots that followed the arrest of then National Unity Platform presidential candidate, Robert Ssentamu Kyagulanyi alias Bobi Wine, a number of people have been abducted and bundled into numberless vehicles commonly known as Drones.

The operatives who are often clad in military or counter-terrorism police attire or sometimes even dressed casually in civilian clothes but armed have kidnapped people on the streets, shops, markets, workplaces and homes.

Lokech said it was time the public got to know who is abducting people and the charges they are facing. Lokech said Akullo and Damulira must avail the names and particulars of the offences people in hands security agencies have committed and ensure they are arraigned in courts.

"Arrest of people, I have instructed director of CID, director of crime intelligence to give me the list of anybody who has been arrested and in any of the cells of our security agencies. I have also instructed that those people arrested they feel are a threat to security must be brought before the courts of law and this must be done within 48 hours as stipulated in our regulations," said Lokech.

Between last November and the end of January this year, more than 30 people have reportedly been abducted by security operatives. Many have not been arraigned in courts and their whereabouts remain unknown.

The abductees include four Makerere Kavule carpenters Elias Musagala, Shafick Zibula, Kabiswa and Kavuma who were bundled into a numberless army green drone on December 30, 2020.

Uganda People’s Defence Forces spokesperson, Brig Flavia Byekwaso, said they will join Akullo and Damulira to ensure all people in the hands of security agencies are known and brought to court. Two days after the November riots, military and police said they had a list of 300 people who had allegedly fueled the protests. This was followed by reports of abductions that have continued to date.

+1 #1 Gerald 2021-02-02 06:09
These are the problems associated with having army chiefs as police bosses, he is forgetting that he is part of police and therefore he too is answerable not just the Cid department.

As a digp he should be giving assurances not pretending to give orders
Quote | Report to administrator
+1 #2 Omuzira Ente 2021-02-02 07:49
During the past Non popular regimes Some elements within the security especially those from the President's tribe have gone out of their way to act un professionally and ended up causing trouble for the regime.

Now the Military Tribunal, headed by Gen Guti which Idi Amin used to carry out extra-judicial killings is now being used to mistreat and torture civilians. when security forces decide to work for an individual then it ceases to be a National force.

The abductions are intended to force Ugandans into submission and support NRM but this has instead tarnished the good image of UPDF in the eyes of the public.

Now people look at UPDF as an occupational force, which they held in high esteem before 2021 elections.

Security needs to check on those excess who arrest people and keep them in safe houses an act that can be used by criminals to bring insecurity.. The Police chiefs should be keen and to see what happened to Gen Kale before treating the public as enemies .
Quote | Report to administrator
+4 #3 Sula 2021-02-02 08:30
1- Uncoordinated actions and empty Instructions meant to hoodwink gullible Ugandans.

2- Release the Kalangala innocent prisoners first before pretending to be serious with the missing people.

3- Apologise for the stupid 'house arrest and assault'' of Bobi Wine after the election.
4- Instruct the police to stop beating Ugandans with planks as if beating snakes.
Quote | Report to administrator
+2 #4 Lakwena 2021-02-02 08:36
I am afraid Afande Lokech is simply coat-gesturing and taking Ugandans for fools, on a wild goose-chase.

In other words, including himself; Lokech knows exactly who is ordering from above, the kidnap and disappearances of Ugandans, especially NUP supporters.

E.g., who ordered the murder in cold blood of Zebra the Boxer? H.E Our "Problem of Africa, Author and Master of Violence", Gen Tibuhaburwa.

Lokech, should please save his soul, stop speaking on behalf of and/or doing other criminals' dirty job of cleaning up after their mess.
Quote | Report to administrator
0 #5 Lakwena 2021-02-02 08:51
To begin with, Lokech is a yesterday not a trained policeman/officer. How kindly will AIGP Grace Akullo, a trained police officer take his 48-hour ultimatum?

Why isn't the ultimatum e.g., coming from Afande Ochola, who is the bonafide Police Boss?

In other words, all the ranks and file police officers in the UPF, resent all the military officers superimposed on them by the military Junta, Gen Tibuhaburwa.

I can see one day some pissed off police officers having a shoot out with the chauvinistic UPDF officers imposed on them by Gen Tibuhaburwa and usurping their powers and whatever benefits and/or privilages they were trained for.
Quote | Report to administrator
0 #6 Kalibbala 2021-02-02 22:38
Sowing the Hatred Seed! by None other than Tibuhaburwa Hitler Violent General of Notorious Robbers Army/Movement. Vowed on live Television to Crash Baganda like He has been Doing since 1966!!

These Crack Smoking Army Personnel clad in Police uniform are Effigies or call them Clowns! Abel Kanduho and Lokech have been Responsible of Killing Ugandans all along!

Until the Day When We Stand Up and Defend Ourselves Death of innocent People will Continue! It is Only in Uganda that Women are arraigned before a Court-Martial for Menstruating!!

Because these Trumped up Charges of Possessing Arms are just Hollow! General Gutti should be Ashamed of himself..Uganda is a Failed State..
Quote | Report to administrator
0 #7 Nayenga 2021-02-03 08:23
It is greatly appaling to hear and learn that the so called NRM bush war which cost a loft of lives (skulls) which were decorated on the streets of Luwero justified among others was extrajudicial government murders.

To see and hear that unknown, uncosntitutional, unclassified persons masquerading as security operatives are routinely kidnapping citizens in broad day light using lawless methods such as use of numberless vehicles is very sad and extremely unfortunate.

To hear that Ugandans now must submit to criminals who have been granted a free reign to opress innocent citizens with impunity is extremely alarming.

So now what is to stop unidentified criminal from harming Ugandans? What is the president asking Ugandans to do while their loved ones disappear one by one. In some extreme cases lives have been lost and Ugandans are expected to submit to this !!!

Where is the rule of law the NRM promised to restore among its 10 point programs?
Quote | Report to administrator
-1 #8 NotCriminal 2021-02-03 16:14
There are many criminal elements in this nup. There are violent looters, and many others who want to bring about an insurrection, backed by foreigners, because they realized that they are not as popular as they thought they were.

The police should arrest them. I for one like having these military men, who defeated kony, lakwena, and adf, in charge of our security when we are dealing with these strange nup people.

Then police, however, cannot turn into the hooligans themselves. They must follow the law, and find some way of accounting for the clandestine nature of the problem. Nevertheless, peace and security are most important.
Quote | Report to administrator
Refresh comments list
RSS feed for comments to this post
Add comment