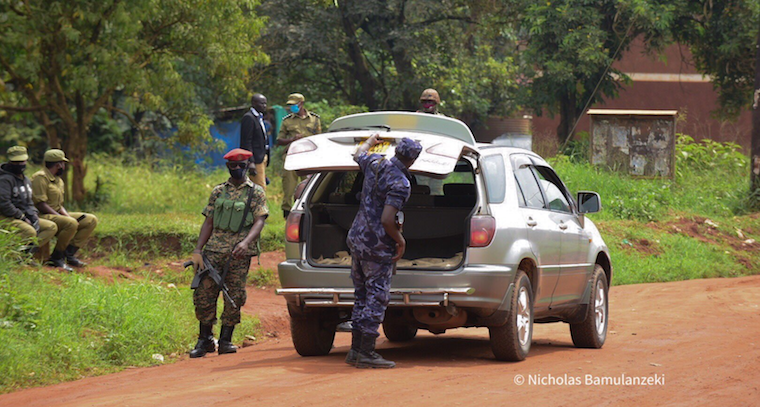 Security checking one of the vehicles in Magere

The High court in Kampala has ordered the security to vacate with immediate effect the home of National Unity Platform presidential candidate Robert Kyagulanyi Ssentamu aka Bobi Wine.

Kyagulanyi and his wife Barbara Itungo have been restricted from leaving their house in Magere, Wakiso district since January 14 when Ugandans took to the polls to elect the president and members of parliament. The Electoral Commission later declared the incumbent, President Yoweri Museveni with 59 per cent win followed by Kyagulanyi who obtained 35 per cent of the cast ballots.

The outgoing head of the Civil Division of High court justice Michael Elubu today ruled that the continued indefinite restriction and confinement of the couple at their home is unlawful and therefore infringes on their constitutional right to liberty. The ruling follows an application filed last week by Kyagulanyi's lawyers led by Anthony Wameli the head of legal department at NUP.

Kyagulanyi through his lawyers had sued the attorney general, the chief of defense forces and the inspector general of police. The lawyers argued that the security operatives including police and the army have refused to leave the couple’s home at all. and that the commanding officers of the said security agencies have not given any reasons for the detention.

Court heard further that the couple has been held illegally and not allowed to access their lawyers, visitors, family or doctors which infringes on their right to liberty. As such, they asked court to order for the unconditional release of Kyagulanyi from his home where he was being confined, a place they said was not a gazetted place of detention.

But the respondents opposed the application arguing that Kyagulanyi previously flouted Covid-19 guidelines and also vowed to make Uganda ungovernable like Libya Iraq and Sudan. Therefore, according to the affidavit sworn by the director of operations in Uganda Police Force Edward Ochom, the security forces kept Kyagulanyi at his home to protect the property of the citizens and for his own good as well.

But in his ruling read to the parties in open court, justice Elubu dismissed the government's defense, saying that if government had serious allegations against Kyagulanyi they needed to be dealt with by following due process.

According to the judge, due process here means that if Kyagulanyi had any offense that he had committed, he should have been arrested, taken to police and produced to any Magistrate's court to be charged which has not been the case here.

"Having found as I do, the restrictions imposed on the applicant are unlawful. It is hereby ordered that they are lifted. Consequently, an order for the restoration of the personal liberty of the applicant hereby issues," said Elubu in a ruling read on his behalf by the civil division registrar Jameson Karemani.

The judge has also noted that due to the increasing numbers of Covid-19 infection cases and the public health necessity, Kyagulanyi needs to comply with the standard operating procedures once his right to liberty is restored.

The court has also ordered the government to pay Kyagulanyi and his wife costs of the application for the violations of their constitutional rights.

Kyagulanyi's lawyers led by George Musisi have welcomed the decision saying that it implies that the security that has been at Kyagulanyi's home has to vacate immediately.

Court has this morning ruled that former presidential candidate @HEBobiwine and wife Barbara kyagulanyi are illegally held in their home and ordered security operatives to vacate their home with immediate effect @observerug pic.twitter.com/t5yOROniMr

UPC had no respect to the rule of law which forced NRA/NRM to go to the bush. Example in point now is The NUP members who were arrested in Kalangala who were released by court only to be detained by military putting the security at log heads with the wanahinchi whose respect to the force was high until these 2021 elections.

Its not Hon Kagulanyi to go to court to challenge these elections, but the Electoral Commission has a duty to declare all election results from the over 34,000 polling stations in the country indication the votes for each candidate at each polling station and the people's court will cross check with their tally results at the home polling station, which they already have on phones and in note books, so that they can cool down or else the future of elections is in balance as an alternative to smooth transfer of power.
Report to administrator
-4 #2 Rwatooro 2021-01-25 17:38
Court has done its work but the questions are; does M7 really respect the institutions?

To show the international community that court orders in Uganda work, he will withdraw the Army and then play another trick on Bobi Wine.

M7 is everything in Uganda. He’s the Finance Minister, Minister of Energy, and all other Ministries in Uganda.

Why because he does the work for the Ministers supposed to do. For instance, you will find M7 opening up a new market wherever it is across the country.

You will find M7, opening up a 20kms road that a company has just completed. You just wonder why we have so many cabinet ministers if he can be the one to do the entire job.

Let Bobi Wine get his freedom and we demand our victory without conditions from M7
Report to administrator
-3 #3 kabayekka 2021-01-25 19:53
Indeed it is great for this African young man to be released so that he can start to organize how his people's representatives are going to do business with a long serving government that has refused to vacate the statehood of Uganda.
Report to administrator
-1 #4 Juwait kali 2021-01-25 21:17
Omuzira Ente still dreams of elections in Uganda where the police move around with their faces covered with obukokolo.

Wake up my friend,the brutality that was meted on bobi wine was to warn future wannabe candidates in the opposition. Am afraid this was the last election as we know elections.
Report to administrator
-1 #5 WADADA rogers 2021-01-25 23:26
In a real Dictatorship like Uganda, court orders are just mere pieces of paper that can be ignored.
Report to administrator