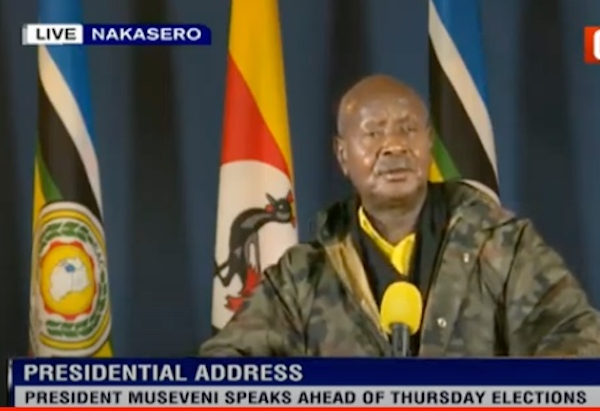 A screen grab of Museveni's address

President Yoweri Museveni has in a televised address today evening said he ordered for the internet shutdown in response to tech giant, Facebook’s taking down of pro-government accounts.

Over the weekend, Facebook took down several pro-NRM accounts - with the most high profile being that of President Museveni's senior press secretary, Don Wanyama, social media influencers such as Full Figure, Olaxxes, Ashburg Kato, Bajjo among others.

Facebook in a statement Monday, said the accounts were taken down because "They used fake and duplicate accounts to manage pages, comment on other people's content, impersonate users, re-share posts in groups to make them appear more popular than they were."

"This month, we removed a network of accounts and pages in Uganda that engaged in CIB (coordinated inauthentic behaviour) to target public debate ahead of the election," Facebook's head of communication for sub-Saharan Africa, Kezia Anim-Addo, said in an email to AFP news agency.

Museveni said after taking down the pro-NRM accounts, his government wrote to Facebook demanding for answers but the 'arrogant' tech giant went mute and so he decided to also not make Facebook available for everybody in Uganda.

"There is no way somebody can come to play with our country to decide who is good or bad. We can't tolerate that arrogance for anybody to decide what is good or bad for us...If you want to take sides against NRM, then you should not operate in Uganda. I am sorry about the inconvenience for those using the channel but government has closed it." said Museveni.

Ironically, the president's speech was also being broadcast on his Facebook account - most likely using VPN (virtual private network) which circumvents internet blockades. Social media accounts including Twitter, Facebook, WhatsApp, Instagram, Snapchat, Skype, Viber and some Google and Telegram have been impacted by the blockades.

A section of Ugandans have downloaded VPNs with the most interest and downloads registered in northern Uganda, eastern and western Uganda according to Google Trends. Social media usage and interactivity has significantly reduced since the shutdown that started with the blocking of Android's Play Store on Friday last week.

The internet shutdown also comes just weeks after the government through the Uganda Communications Commission (UCC) wrote to Google and YouTube asking them to take down several opposition candidates which they claimed jeopardised the security of the country ahead of this week's general elections on Thursday. Another social media giant, Twitter in a statement, said "earlier this week, in close coordination with our peers, we suspended a number of accounts targeting the election in Uganda."

"Ahead of the Ugandan election, we're hearing reports that Internet service providers are being ordered to block social media and messaging apps. We strongly condemn internet shutdowns – they are hugely harmful, violate basic human rights and the principles of the #OpenInternet."

Although Museveni claimed that he ordered for the internet shutdown due to Facebook's actions, his ministers including Internal Affairs minister Gen Jeje Odongo had already warned weeks before that government will have to find a way of controlling social media which was being used to mobilise opposition supporters to riot over election results.

In the previous 2016 general elections, there was an internet outage before and after the elections with only those with VPNs able to access the internet. It is a common practice by governments in Africa to shutdown the internet ahead of elections with the belief that it prevents mobilisation and sharing of 'fake' election results and propaganda among opposition supporters.

According to a report by Top10VPN, there were at least 93 major internet shutdowns in 21 countries in 2020 leading to a $4bn loss.

The shutdowns included total Internet blackouts, Internet throttling (where access to the internet has been reduced to 2G speeds, which permits the use of SMS and voice calls but renders modern websites and apps functionally unusable. This is an internet blackout in all but name.) or social media shutdowns.

The United Nations which declared the Internet a human right, in a 2016 resolution condemned "unequivocally measures to intentionally prevent or disrupt access to or dissemination of information online in violation of international human rights law and calls on all States to refrain from and cease such measures”.

2- 'I cannot allow, Iam sorry about the inconvenience..'' as who , its madness to have a president micro-managing the entire country -- even small matterslike these ! there is no Minister ?

3- This madness has to be stopped.( Buno ubusajja butujooze nnyo !! )
Quote | Report to administrator
-2 #12 Sula 2021-01-13 10:05
''becoming a President does not change who you are, it only reveals who you are''' M.Obama - SO : those who were primitive will remain primitive, the thieves will remain thieves, the murderers remain murderers, ,the liars remain lairs, the decent remain decent and the stupid remain stupid.
Quote | Report to administrator
+1 #13 Lakwena 2021-01-13 11:10
Quoting Odongkara:

Tibuhaburwa is a criminal, a political pyromaniac who should be sent to the international criminal court.

He’s a person who was not elected democratically but who came to power by the barrel of the gun and he isn’t interested in democracy in the slightest.

Odongkara, at his rate of rumbling, the recent bloody murder of Ugandans on the streets of Kampala and damning international relation;

many NRM members now cringe and dread to discover that: actually Gen Tibuhaburwa is not a mistaken wrongdoer (Author and Master of Violence) by the opposition, but a pure evil they have been supporting and worshiping.