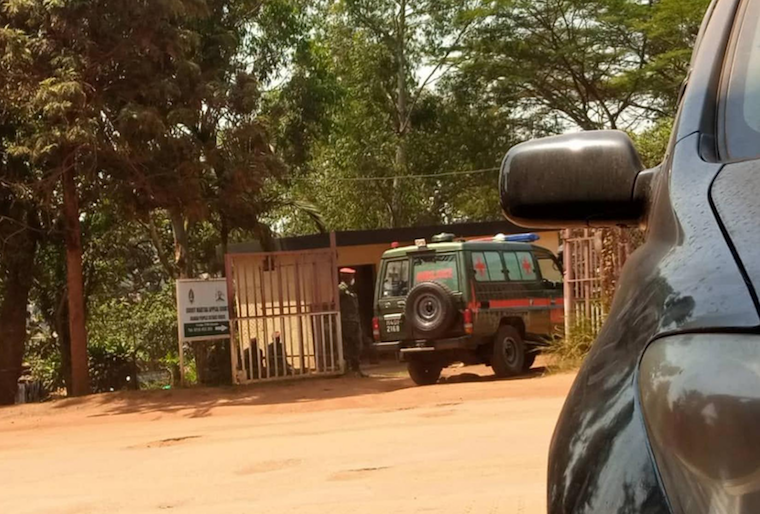 This ambulance was being used to bring in suspects

The General Court Martial in Makindye has remanded 49 supporters of the opposition National Unity Platform (NUP) party to Kigo and Kitalya government prisons until January 19, 2021.

The suspects were today Friday arraigned before court presided over by Lt. Gen. Andrew Gutti and charged with illegal possession of ammunition. Prosecution alleges that the accused persons and others still at large on January 3, 2021  while at Makerere Kavule, Kigundu Zone, Kawempe Division were found in possession of four rounds of ammunition of an AK-47 rifle, which is the monopoly of the defence forces.

The suspects were first arrested on December 30, 2020, from Kalangala district during Kyagulanyi's campaign trail. On the same day, Kyagulanyi was also picked up by security personnel and airlifted to Kampala before being driven to his home in Wakiso district.

But the majority of the accused persons who have been arraigned in the court-martial were kept under police custody and later produced before Masaka Chief Magistrate's court presided over by Charles Yeteise a few days ago, where they were charged with inciting violence and doing acts that were most likely to spread the infectious disease.

Our reporter saw an army ambulance registration number H4DF 2168 at the court premises taking some of the accused persons away from court in shifts.

Accordingly, Lt. Gen. Gutti remanded the accused persons up to January 19. Sseggona accused the state of trumping up charges against members of the opposition.

Gutti with Your Big Stomach, You are a Nuisance to Uganda's Courts of Law! last Time Kitatta had a Golden Gun but He is Now a Free Man

Count Your DAYS..You will be in the same Cooler for Crimes against Humanity..

Guti has been planted there to execute orders from above. while the real engineers of human rights abuse are from a particular region so as to escape international attention.
Report to administrator
12