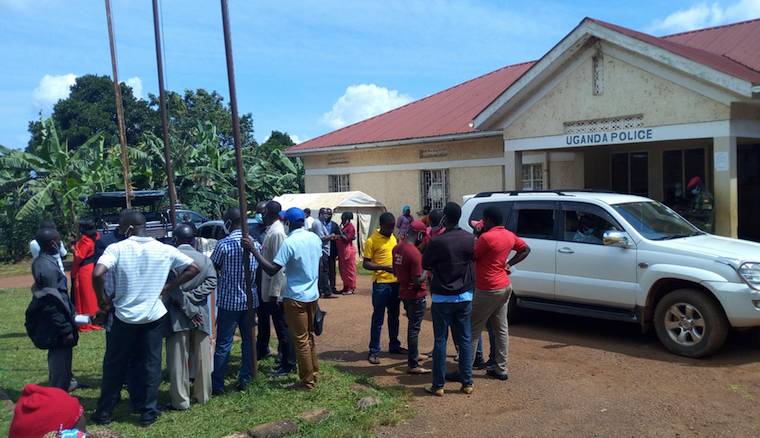 Relatives waiting for the suspects outside Kalangala police station

The 27 National Unity Platform (NUP) supporters who were detained in Kalangala during the campaign trail of their presidential candidate, Robert Kyagulanyi Ssentamu aka Bobi Wine on December 30 have been released on police bond.

Although none of the NUP supporters was charged, they were required to present two sureties from Kalangala district. They have been directed to report to Kalangala police station on January 12. The 27 suspects were picked up in Kalangala together with over 100 others including the advance campaign team of Kyagulanyi.

37 suspects were natives of the island district while the rest were from other parts of the country. According to Kalangala police, some of the suspects were transferred to Masaka Central police station.

Katumba said he intervened to have the suspects released because Kalangala police and residents did not even know what tear gas was since they have always been law-abiding but were provoked and incited by Kyagulanyi and his team.

Richard Kabanda Kiggundu, one of the residents has condemned the arrest and subsequent detention of the suspects, saying his sister Sarah Nakabanda was on her way home when she was arrested.

Ronald Lwanga, the Kalangala district NUP registrar has asked police to exercise fairness while arresting Ugandans. Lwanga said arresting and detaining people for over 5 days and releasing them without charge defeats justice and fairness.

Kalangala district police commander declined to comment on the release of the NUP suspects and instead referred our reporter to the Masaka regional police spokesperson Muhamad Nsubuga, who was not available for comment.

all the killings and unwaranted detentions, that we have witnessed, signifies a fake EC, a fake government.
Report to administrator