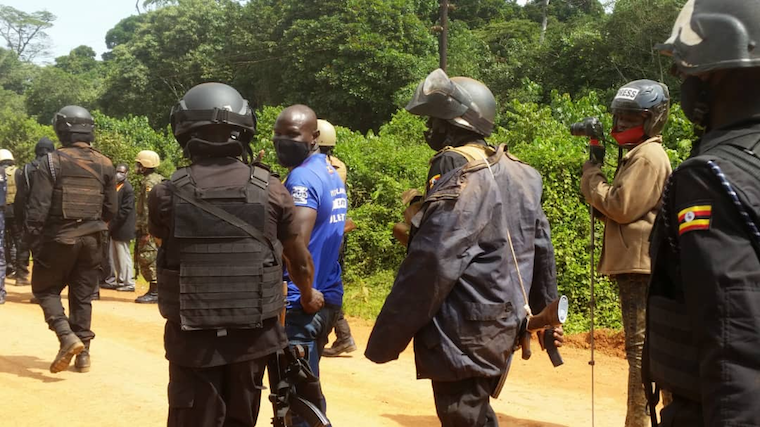 Some of Bobi Wine supporters who were arrested in Kalangala

Kyagulanyi who arrived in the island district aboard MV Sesse ferry was involved in a cat and a mouse chase with security who had deployed heavily. Following his arrest, Kyagulanyi was later airlifted to Kololo airstrip in Kampala before being forcefully driven to his home in Magere, Kasangati in Wakiso district. More than 30 of Kyagulanyi's campaign team including his chief bodyguard Eddie Mutwe were also arrested.

Also arrested were journalists, Culton Scovia Nakamya of BBS Tereffayina, Ghetto Media's Ronald Kalyango and Daily Monitor's Derrick Wandera. Initially, other journalists had also been arrested until one security officer, who'd all along disguised as a journalist ordered for their release.

"We were standing in a group as journalists. It felt a little safe as the police & the military battled protesters in Kalangala town council. Suddenly, a teargas canister was thrown at us, instantly dispersing us. Moments later, the armed men came picked Culton Scovia of BBS Terefayina. Her crime; making updates over the social media. Earlier, Ghetto Media's Ronald Kalyango had been picked. Next person of interest was Daily Monitor's Derrick Wandera. While Culton was later released, Derrick and the other journalists are under detention. That was before the military copter airlifted Bobi Wine out of Kalangala," writes the author.

Police in a social media statement denied reports of Kyagulanyi's arrest instead saying he'd only been restrained.

"Please disregard false claims by NUP and other social media platforms that Hon. Kyagulanyi Ssentamu Robert has been arrested, while on his campaign trail in Kalangala district. We would like to clarify that the candidate was restrained for continuously holding massive rallies amidst the increased threats of coronavirus, in total disregard of the Electoral Commission and ministry of Health guidelines. He's being transferred to his home in Magere, Kampala." said police.

Kyagulanyi was expected to campaign in Kyamuswa county areas including Kachanga-Kacungwa in Mazinga sub-county, Kisaba, Namisoke and Misonzi and Kalangala town council at Kaala playground. However, he was blocked by the army and police from proceeding to the campaign venues.

Following Kyagulanyi's arrest, protests broke out on the island and police fired teargas to disperse angry supporters forcing traders to close their shops. Richard Katumba, the NUP spokesperson in Kalangala says that police has not informed them why their supporters were arrested.

All in the name of policing @HEBobiwine The presidential candidate is expected to campaigns in Kalangala district (Ssese Islands) today. @observerug pic.twitter.com/f7YqfeYwS6

12
0 #11 Lakwena 2021-01-04 11:31
Whatever our "Problem of Africa", Gen Tibuhaburwa aka Juma Lenin tries to do or not do to Kyagulanyi and/or the opposition is politically self-defeating.

In other words 35 years and counting, who is to blame now or tomorrow for the atrocities and murder being committed on Ugandans?

Obote (RIP) is not there to blame for what Gen Tibuhaburwa and his UPDF and Police are doing to Ugandans.

Amin (RIP) is not there to blame for what Gen Tibuhaburwa and his UPDF and Police are doing to Ugandans.

Gen Tito Lutwa (RIP) is also not there, to blame for what Gen Tibuhaburwa and his UPDF and Police are doing to Ugandans.
Report to administrator
12