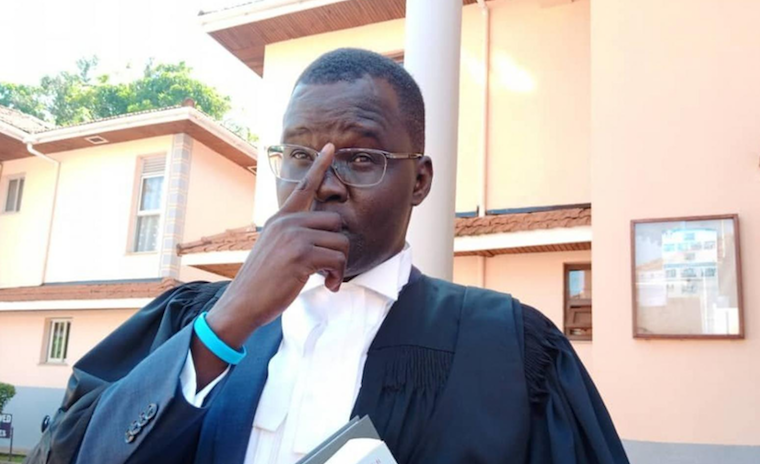 Human rights lawyer, Nicholas Opiyo will spend his Christmas in Kitalya prison where he has been remanded on money laundering charges. He appeared this morning before the Nakawa chief magistrate Dr. Douglas Singiza who read for him the charges of money laundering.

The magistrate didn’t allow Opiyo to plead to the charges, saying his court lacks jurisdiction over the matter. He, therefore, remanded Opiyo to Kitalya prison until December 28, 2020. Judiciary spokesperson, Solomon Muyita, says Opiyo’s file has been forwarded to the registrar for onward transmission to the Anti-Corruption court which has jurisdiction over the matter.

Prosecution alleges that on October 8, 2020, at Absa bank Garden City branch in Kampala district, Opiyo's organization Chapter Four Uganda where he is the executive director received $340,000 (over Shs 1.2 billion) through account number 6004078045 well knowing that the money in question was proceeds of crime.

Opiyo, who is a renowned critic of government over human rights violations, was picked up by plain-clothed operatives on Tuesday from Lamaro restaurant in Kamokya, a Kampala suburb where he was having lunch with his colleagues. He was taken to the Police Special Investigations Department headquarters in Kireka together with four other lawyers/human rights defenders.

They include Simon Peter Esomu, Anthony Odur, Herbert Dakasi and Hamidu Tenywa who have since been released without any charges being preferred against them. Several national and international organizations including the Uganda Law Society have condemned Opiyo’s arrest and subsequent detention beyond the mandatory 48 hours without appearing in court.

It is also alleged at the time their arrest Opiyo and his colleagues were strategizing to investigate the circumstances under, which more than 54 people lost their lives during the November protests triggered by the arrest of the National Unity Platform presidential candidate, Robert Kyagulanyi.

"Chapter Four is a human rights organization, duly registered as a Non-Governmental Organization (NGO) with the NGO Bureau and as a company limited by guarantee with the Uganda Registration Services Bureau (URSB). Further still, Chapter Four Uganda fully complies with its legal obligations under all the relevant laws, including Anti-Money Laundering Act. It files annual returns to the relevant statutory bodies, revealing its source of funds and activities."

Thugs,thieves, money.laundering criminals in jail.Supito!!!
Report to administrator
+1 #2 A k Mukasa 2020-12-25 00:03
To try and hold the government to account or to engage in any activities that the regime perceives to be anti status quo is now a felony in Uganda.

The modus operandi is now well. You are abducted and detained on trumped up charges. You are taken to court and remanded to prison. The case drags on as the prosecution repeatedly tells the court that it is still gathering evidence.

After many court appearances by the accused and still nothing from the prosecution the case is dismissed as the state has lost interest.
Report to administrator
+1 #3 Akao 2020-12-25 17:02
The dictator in adult diapher will do anything to try to stay in power.

Now he is thinking that he will stop donors from providing to the few people with brains that are helping Ugandans population where his uaeless corupt incompetent govt has failed.
Report to administrator
0 #4 Akao 2020-12-25 17:02
The dictator in adult diapher will do anything to try to stay in power.

Now he is thinking that he will stop donors from providing to the few people with brains that are helping Ugandans population where his uaeless corupt incompetent govt has failed.
Report to administrator
0 #5 Akot 2020-12-27 17:34
A k Mukasa, thanks.

In what state will Museveni leave Uganda & its people when he dies?

UK finally UNITED to made stand with BREXIT & unless it remains so, EU will distabilise it! This is why Nicola Sturgeon MUST start loving UK & not EU as she does, to give chance to UK UNITY, without which they will never make it as a real NATION!

Ugandans MUST become ONE PEOPLE, if they want to be in position to face Museveni & get chance to put in place the kind of governance they want after their UNITE ends the demon's ownership of Uganda!

Are 35 years not long enough & Ugandans still have time to think of what they want, while Museveni loots, uses them against one another, make them thieves...& to the benefit of who?
Report to administrator
0 #6 Akot 2020-12-27 17:41
Akao, agreed, but,

The dictator is only afraid of the day Ugandans will wake up & bring down the tribalistic system & UNITE against him!

Why is it that Ugandans don't see, feel Museveni's fear of the power their UNITY can do to him?

+1 opposition candidates is a blessing to Museveni; it divides an alrealy tribally divided & ruled Ugandans, assures & will cover up election rigging to ensure his continuity!
Report to administrator
0 #7 Kirya 2020-12-28 01:29
M7 you have no brains. The whiting is on the wall to leave in peace but you think it is 1986!

You are most hated. Everybody is looking for your ass.
Report to administrator