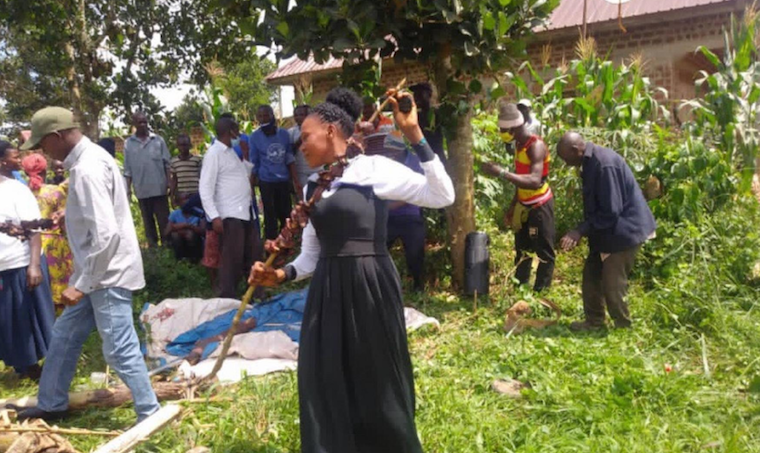 One of the residents with her skewer of meat

Residents of Lwanyonyi-Kirangira in Nama sub-county in Mukono district have held a feast to celebrate the death of their landlord, Israel Dickson Banoba. The late Banoba, who has been feuding with the residents over land for the last 30 years, suffered a heart failure on Monday last week.

The residents have for years, accused Banoba of forcefully evicting them from their land and corruptly dragging them to court. The news of his death brought joy to the residents. On Thursday about 80 residents led by Umalu Ssebuyonjo slaughtered a cow and roasted the meat on the contested land to celebrate Banoba’s demise.

Ssebuyonjo says that they held the feast to wash away the pain the deceased had caused them.

“It’s not so usual for people to be happy when someone dies. However, with what Banoba put us through while he was still alive, we deserve to celebrate because he is finally gone,” he said.

Adding that, “Let this be an example for people who grab other people’s land and evict people off the land. The people will do this to you.” Jeffrey Zziwa, another resident says they will start to repossess their land when Banoba is finally laid to rest on Saturday.

“After burying him, we shall all go back to our land where we were evicted from,” he said.

The residents also mockingly installed a puppy as Banoba’s heir. In May 2018, Banoba secured a court order allowing him to evict over 200 people from the contested land.
The deceased was accused of taking advantage of the night-time curfew in April 2020 to destroy several crop gardens on the disputed land belonging to residents. While still alive the late Banoba earlier told URN that he bought the contested land measuring about 200 acres from Dr. Emmanuel Lumu in 1971.

The people will do this to you? I know it’s not usual for people to be happy when someone dies.

But Wainainchi, as day follows night Banoba is lucky; it is only the residents of Mukono celebrating his demise.

But as for for you and our Problem of Africa, Gen Tibuhaburwa, it will be the whole country celebrating and dancing themselves lame.
Report to administrator
+2 #5 Wainanchi 2020-11-30 18:46
@ Wadda Rogers---..First good comment and plus from you Wadda.You rock Sir.!!
Report to administrator
0 #6 rubangakene 2020-11-30 20:40
This celebration is disgusting; it resembles scenes from prehistoric times. What has become of Ugandans really?

Where is their souls if any? One man bad has died but corruption is still simmering and boiling in this cauldron of ours.