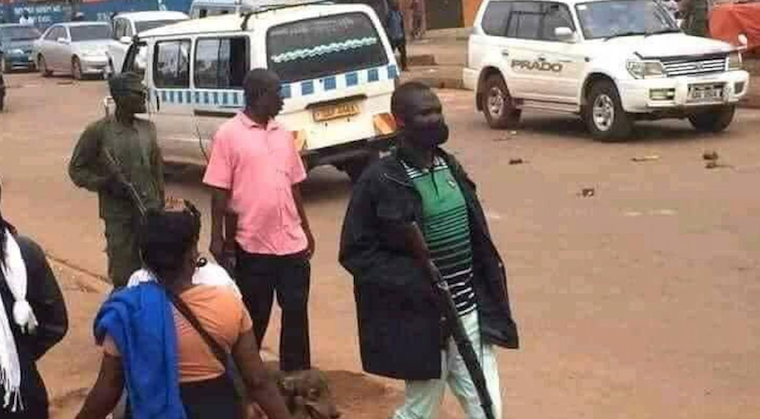 Non uniformed armed personnel on the streets during the protests

Uncoordinated troop operations and movements is what led to the death of at least 49 people and more than 100 injuries during last week's Kampala city protests.

Sporadic protests erupted in various parts of the city and other regions all over the country following the arrest of National Unity Platform (NUP) party presidential candidate Robert Kyagulanyi aka Bobi Wine. Although the protests were recorded in more than 20 districts, greater Kampala was the epicentre.

Now a superintendent of police who preferred anonymity says that there were operational mistakes that resulted from uncoordinated actions between National Command Centre based at Naguru police headquarters and Kampala Metropolitan Security Monitoring Centre that sits at Kampala Central police station.

The police source says that the National Command Centre sat on Tuesday and resolved that there was a need to put a stop on Kyagulanyi’s continued violation of SOPs. Kyagulanyi was arrested the next day on Wednesday.

“When they agreed to stop Bobi Wine, a communication was sent to Busoga–Bukedi Zonal commander to arrest him. But that decision was not passed to KMP for the officers to be on alert,” the source said.

Another operations commander at one of the 18 divisions that make up Kampala Metropolitan, who is at the rank of assistant superintendent of police, said the protests were a surprise to them.

“The fact is we had been receiving information about planned massive protests in case Bobi Wine is arrested. But our intelligence indicated that was to happen when his campaigns extended to greater Kampala. This was a surprise to us,” the officer said.

The senior police officers said since everything was a surprise to them, Kampala riots were handled by security apparatus that is designed for daily security operations of the city but not for a riotous scenario.

Regarding shootings in arcades, plazas and at people standing on verandas, operation commanders attributed most of the killings to plain-clothed armed security operatives.

Although we could not independently verify the claim, security sources said the operatives are attached to crime intelligence. The operatives that had been gathering intelligence on the allegedly planned demonstration were hastily deployed under no command.

“These guys just come in vans and conduct operations without even alerting the area commander. Even this time they came dressed casually but were openly armed. We saw them shooting but we could not stop them since they are not under our command,” said another operations commander.

When asked about plain-clothed armed men who were deployed to query rioters, Security minister, Gen Elly Tumwine said: “When you want to catch a thief sometimes you behave like a thief. All those are tactics."

URN understands that a team of police and military has been put in place to review all videos captured by civilians and CCTV cameras on buildings showing armed men in civilian wear, police and military personnel shooting at crowds standing on verandas and those who were inside buildings.

I wIndeed some of you are.so funny that I have to read your comments two times in DISBELIEF!! hahaua
Report to administrator
12