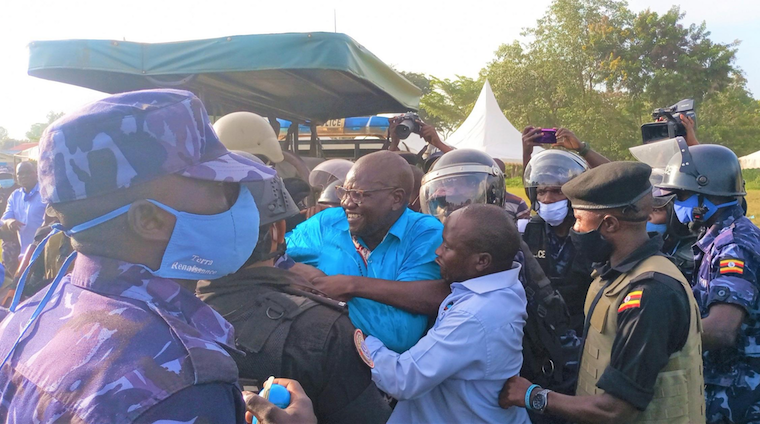 The Forum for Democratic Change (FDC) party has resolved not to pull out of presidential campaign activities despite nearly all opposition candidates suspending campaigns over the arrest and continued detention of Robert Kyagulanyi aka Bobi Wine.

In solidarity, except for Lindah Kalembe, all the other opposition presidential candidates including Gen. Mugisha Muntu, Lt. Gen. Henry Tumukunde, Willy Mayambala, John Katumba, Joseph Kabuleta, pastor Fred Mwesigye, Norbert Mao have called off their campaigns until when Kyagulanyi is freed.

The FDC presidential candidate, Patrick Oboi Amuriat himself was also similarly arrested by police in Gulu for also allegedly flouting COVID-19 SOPs including restricting campaign rallies to just 200 people and ensuring that they all wear face masks and maintain a 2-metre social distance. Amuriat said FDC can only pull out of the presidential race if they are going to engage in something else that will oust President Yoweri Museveni from power.

Addressing journalists on Thursday, FDC  national chairman Wasswa Biriggwa condemned the arrest of their presidential candidate and NUP’s Kyagulanyi. Biriggwa castigated the police for the cruelty in suppressing riots that broke out, adding however that this will not intimidate them into suspending their campaign activities.

Biriggwa noted that now Amuriat has been released, he is ready to continue his campaigns from where he'd stopped from. He stressed that they must continue fighting to liberate the country.

"I believe that we should continue to fight, we shall be arrested and when we’re arrested another person will take the place of the person who has been arrested because this is not only for the presidential campaigns. This is a move for the people of Uganda to be liberated. So the fight shall continue and continue. We should not give room to Museveni to think that he has won and this campaign is going to continue," Biriggwa said.

The FDC party also demanded the resignation of the Electoral Commission chairperson Simon Byamukama Mugenyi for failing to take charge of the electoral process. FDC secretary general Nathan Nandala Mafabi says according to what is happening in the ongoing presidential campaigns, President Museveni and the security personnel are now in charge of the country’s electoral process.

Nandala says Byabakama’s Electoral Commission is not allowing a level ground for all presidential candidates in favour of the incumbent Museveni.

"The Electoral Commission looks like it has lost power, now the power has been given to one candidate that is Museveni with the security forces. This clearly shows that justice Byamukama, it is high time he declared that he has failed and resign. The reason we are raising it is he has not reigned in on candidates and that is candidate Museveni who is doing everything contrary to others. For example, our candidate was in Agago on radio and he was switched. We could not be allowed to speak on radio and yet it was agreed that the campaigns shall be scientific under minimal meeting of people," said Mafabi.

On Thursday, police in Amuru district blocked Amuriat’s rally in Pabbo town council. Tensions ensured after Amuriat’s entourage led by Michael Lakony, the Amuru LC V chairperson stormed the town council to address enthusiastic supporters only for police to swing into action and block them.

Amuru district police commander, Emmanuel Bwambale advised the team to shift to Pabbo secondary school compound which is a few kilometres away from the town council. However, Amuriat’s team resisted the directive, arguing that the school compound is isolated and bushy. Following a heated exchange of words, confusion erupted after more than 1,000 FDC supporters joined to back up their leaders.

The anti-riot police then fired teargas and live bullets to disperse the angry crowd, and for several hours, businesses and traffic along the highway came to a standstill as residents retreated to their shops and corridors for safety.

Morris Odong, an ardent FDC supporter said in an interview that they are surprised of the continued interference by police aimed at foiling their campaigns ahead of the 2021 general polls.

Michael Lakony, the FDC chairman in Amuru explained the violent action of the police was uncalled for since Amuriat was scheduled to address his supporters in the district today as per the Electoral Commission campaign schedule.

When contacted, Jimmy Patrick Okema, the Aswa River Region police spokesperson blamed FDC leaders for insisting on holding their rally in the middle of Gulu–Nimule highway, an act that would flout COVID-19 SOPs.

-1 #1 WADADA rogers 2020-11-20 09:03
We saw that coming, that is the very reason why many Ugandans used to say FDC is the opposition arm of the NRM, with just one candidate still in the race, there is no way the election can be put off, FDC does not see anything wrong with another candidate in the race being arrested without a reason
Report to administrator
0 #2 Apollo Ekelot 2020-11-20 11:52
These FDC jokers. I wish they could reflect on the words of the 19th century Greman pastor Martin Niemöller who said “First they came for the socialists, and I did not speak out—because I was not a socialist. Then they came for the trade unionists, and I did not speak out— because I was not a trade unionist. Then they came for the Jews, and I did not speak out—because I was not a Jew. Then they came for me—and there was no one left to speak for me” I wish they also knew that in the current environment what they are engaging in is futile; poor fellows!
Report to administrator
-2 #3 Wooden K. 2020-11-20 16:44
Amuriat is a weak individual that is unfit to step into Dr.Besigye`s shoes. No wonder Besigye is keeping his distance.

He pretends to be tough but acts timid.

That day , he was carried off by idiots and dumped infront of Byabakama without shoes was the day he would have proved he has a spine.

But he missed the chance to show some guts by insisting that Byabakama, at least, condemns the idiot ,

His failure to show solidarity is yet another missed chance.
Death to FDC !!!
Report to administrator