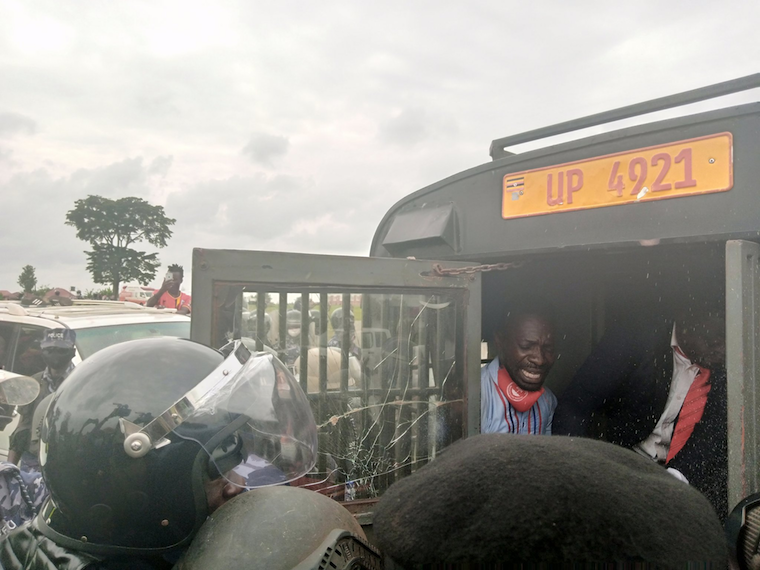 At least three presidential candidates have announced the suspension of their campaigns following the arrest of two other presidential candidates; Robert Kyagulanyi aka Bobi Wine of the National Unity Platform (NUP) and Patrick Oboi Amuriat of Forum for Democratic Change (FDC).
Kyagulanyi and Amuriat were arrested yesterday from Luuka in eastern Uganda and Gulu in northern Uganda respectively. Now, Gen. Mugisha Muntu of the Alliance for National Transformation (ANT), independent presidential candidates Lt. Gen. Henry Tumukunde and John Katumba have suspended their campaigns and called for the immediate release of their fellow presidential candidates.
The arrest of Kyagulanyi sparked off spontaneous protests across the country in Masaka, Hoima, Gulu, Luweero, Kampala, Tororo among others. Kyagulanyi and Amuriat are yet to be charged but police said they were arrested for allegedly flouting the coronavirus disease standard operating procedures (SOPs).
Muntu announced the decision to suspend campaigns on Wednesday while meeting supporters in Gonna, Butambala and Mpigi districts. In Kampala, the rioters lit tyres in the middle of roads around Kisekka market, Nabugabo Lane, Nasser road, Nkrumah, City Square, Bombo road and Kampala road.
The riots also extended to other suburbs of Nansana, Natete, Kireka, Gayaza, prompting police backed by anti-riot police, military and Local Defence Units (LDUs) to fire teargas and live bullets to disperse the protesters, leaving at least 4 people dead and 38 others injured.

Muntu says that his party has suspended the campaign tours until further notice. The former commander of defence forces (CDF) was on Thursday scheduled to campaign in Mubende, Mityana and Kassanda and on Friday in Kyankwanzi and Kiboga.

"Unfortunately we have been operating in an abnormal situation and today the situation has become extra abnormal because one of the presidential candidates Hon. Kyagulanyi has been arrested and we understand that a number of people have been shot," says Muntu in part.

He adds that it doesn't make sense to have presidential candidates who have been fully nominated to campaign in a period of 60 days but only for the regime to use terror upon them.

"The regime needs to know that we are dealing with a very delicate situation in this country. They should really stop being reckless because you can do one thing and it sparks off and the problem becomes larger than you anticipated. We don't want to go in that direction," said Muntu.

He urged that the regime pulls back and normalise the situation by first releasing presidential candidate Kyagulanyi and then work towards having sanity in the country.

"I don't know how many people have been shot dead today [Wednesday]. Life is life, nobody wants any Ugandan to lose life. So, if there two, three, four, five people and they are now dead...what for? You want to enforce a stupid order of what you say is Covid and then end up having so many people dead...what for?" Muntu questioned.

Likewise, Tumukunde said that the country is now at a turning point in history and that the actions of the authorities shows disregard of the current state of affairs.
“We join other political leaders to unequivocally call for the immediate release of presidential candidate Robert Kyagulanyi,” said Tumukunde on his Twitter handle.
Tumukunde on Wednesday held campaigns in Bundibugyo and Ntoroko districts. He said he has suspended his Thursday campaign to engage other opposition members in the race on possible unified action. Tumukunde was expected to hold rallies in Kamwenge, Kyenjojo and Kyegegwa districts today.

“We will suspend campaigns tomorrow pending the release of the two candidates and we shall continue to further consult to get a more formal decision on police stopping us from reaching the people even when we are following all the rules as possible,” Tumukunde said

Tumukunde says police has intentionally tried to frustrate the forces of opposition under the guise of implementing Covid-19 guidelines. Norbert Mao, the Democratic Party (DP) presidential candidate issued a statement condemning the arrest of Kyagulanyi saying that all democracy seeking forces should cooperate in highlighting and combating police brutality.
“I have instructed the DP national legal advisor counsel Luyimbazi Nalukoola to take legal steps to ensure that the NUP presidential candidate Robert Kyagulanyi who is in detention is released from custody immediately,” reads Mao’s statement in part.

Former FDC presidential candidate Kizza Besigye also took to his official Twitter handle and demanded the immediate release of Kyagulanyi.
“Escalating brutality against some presidential candidates, while the Electoral Commission-EC looks on or, even encourages it, was bound to a disastrous situation,” says Besigye in part.

When candidates start realizing that what affect one of them affects another, then we are headed in the right direction and they should do the same by pulling out of the race to support Kyagulanyi.
Report to administrator
0 #2 Lakwena 2020-11-19 10:48
In other words, I want to hear the same from Hon Norbert Mao of DP, and the other tongue twisting names' independent candidates. As for UPC, the leadership has sold it birthright soul, and now only live to eat and sh...

Otherwise, Ugandans are going to participate in the most bogus General Election never held anywhere in the third world.
Report to administrator
+3 #3 Wainanchi 2020-11-19 12:17
The Goverment must take strong action first of all to protect health of its citizens Politics and campaigning goes next.No candidate is allowed to make riots and endanger lives of Ugandans

Those who are in breach of these rules must be penalized.Mukono people have to stop using violence and it's ring leaders must be hold accountable .Police enforce rules relating to restrictions of assembly.

Uganda is reaching dangerous levels of infections running after Kenya.Jyst months ago it was one of the most prominent countries controlling corona virus .
Report to administrator
-1 #4 Lakwena 2020-11-20 09:05
Quoting Wainanchi:

The Goverment must take strong action first of all to protect health of its citizens Politics and campaigning goes next.No candidate is allowed to make riots and endanger lives of Ugandans

Uganda is reaching dangerous levels of infections running after Kenya.Jyst months ago it was one of the most prominent countries controlling corona virus .

But Wianainchi, you and Tibahaburwa are the dangerous human being that must be gotten rid of.
What govt are you talking about?

Criminals like you can't govern. if you know violence is a crime, but you and Tibahaburwa came to power thru violence (organized killing); what right and moral authority do you have to tell others to stop violence?

In other words Wainainchi, you are as guilty as sin, in as far as violence against innocent Ugandans is concerned. It is a matter of time: the measure you give will be the measure you will get.
Report to administrator
+2 #5 Wainanchi 2020-11-20 09:28
It is funny that thug general KARATASI who betrayed Uganda and sided with foreigners to attack Uganda was not is saying such STUPIDO things.

Corona virus is on rampage all over the world.

Uganda has a huge number of infections and all over the world there are well known norms to keep distance
and not to assemble in bigger numbers Maybe general KARATASI is unknown scientist who has medicine to kill corona virus and is going to save Uganda.

Thief KARATASI is using stolen money to bribe people and buy votes.He should be in prison and not on campaign trail.KARATASI for president?? Hahagahihihiih
Report to administrator