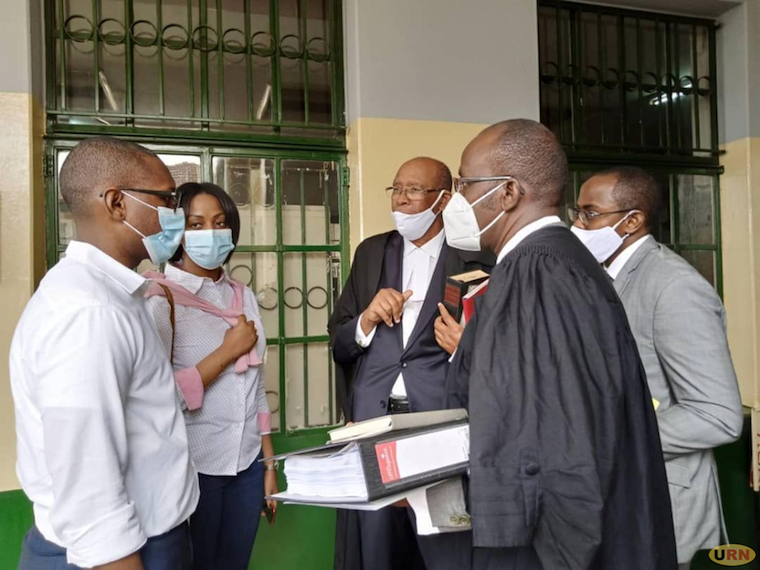 Exactly 4 years since he shot dead child rights activist Kenneth Akena, Mathew Kanyamunyu has been sentenced to five years in prison for manslaughter after court ruled that he unintentionally killed the social worker in 2016.

Kanyamunyu’s original murder charge was reduced to manslaughter by the director of public prosecutions (DPP) after a plea bargaining session held at the High court criminal division in Kampala today.

Kanyamunyu who was facing murder charges alongside his Burundian girlfriend Cynthia Munwangari, recently went for a traditional ritual known as Mato Oput, an Acholi term that means “to drink a bitter portion made from the leaves of the ‘oput’ tree” making his case rather interesting and challenging for his lawyers.

In this ceremony held at the Ker Kwaro Acholi (Acholi chiefdom) Kanyamunyu reportedly admitted to killing the deceased and was asked to pay ten cows and three goats by the elders in Acholi.

He had previously pleaded not guilty before the trial judge in Kampala. Last week, Kanyamunyu told court that his lawyers Caleb Alaka, McDusman Kabega and Evans Ochieng abandoned him after they failed to pick or return calls.

Now according to his new lawyer Peter Kabatsi, the DPP reduced Kanyamunyu's murder charge to manslaughter and an amended charge sheet has been presented to court in which Kanyamunyu has pleaded guilty to the lesser manslaughter.

“Therefore Kanyamunyu has accepted before court that on the 12th November 2016 at Kampala Jinja highway, he unlawfully caused the death of Kenneth Akena. On the fateful day, Kanyamunyu and Akena got involved in a motor accident which resulted into a scuffle and Kanyamunyu shot Akena in the chest,” Kabatsi says.

Justice Stephen Mubiru has said that since Kanyamunyu is a first-time offender and also took the victim to the hospital, he won’t get life sentence and court has accepted his bargain of six years imprisonment. Mubiru says that court has reduced the sentence by 11 months, meaning he is to serve 5 years.

He has been advised to appeal the sentence if he considers it harsh.

“Kanyamunyu is aged 43 years and he is a first offender, after shooting him, he realised the gravity of his actions and rushed the deceased to hospital where he told the doctors what had happened and attempted to save his life," said justice Mubiru.

"The following day he was pronounced dead succumbing to excessive bleeding from the gunshot wound. After agreeing to the facts of the offence, Kanyamunyu has now been convicted on his own plea of guilt and now awaits sentencing. He sought out the deceased's family and community leaders and asked for forgiveness. He suffers from hypertension, he is a single parent to 4 minor children.”

The DPP in mitigation says Akena's death caused a lot of trauma to the family and the unrecovered gun could be used in the commission of other offences adding that the offence is grave and carries a maximum of life imprisonment.

The DPP has also withdrawn murder charges against Kanyamunyu’s girlfriend Munwangari according to Kabatsi.

Lakwena , I have already said that if my son/daughter found himself in a situation like that of Kanyamunyu , I would ask them to tell the truth right away. I would tell them to do what Kanyamunyu took 4 years to remember doing.

No responsible parent should allow his son/ daughter to live through the anguish of having killed someone and then lie about it for years. That suppressed guilt conscience is worse than prison.

Wooden, your sons/daughters should count themselves lucky because; you are still there for them.

But Kanyamunyu and brother, were orphaned (on their own) and apparently raised by the Byanyima, who unfortunately also took care of Tibahaburwa .
Report to administrator
0 #32 Wooden K. 2020-11-16 16:02
Good afternoon Lakwena .

I know Kanyamunyu`s story and what happened to his father. He was murdered by " Akena`s tribesmen) .

If you are going to interconnect Kanyamunyu`s orphanage situation with his volcatic temper , you should then think of how Akena`s orphans might behave in the future.

One day , the Akenas might be the ones with the money , the power , the guns , the connections , all the advantages ;then Kanyamunyu& Munywankari`s son will be shot dead by Akena`s orphan for merely denting a car.

The laws that I know tell me that is not Akena`s family that sued Kanyamunyu . Its the State that did it.

This was the case with Munywankari.
DPP may decide to withdraw charges; but the Judge must also ask for the reason behind that withdraw. That was not the case in this particular trial

I know Kanyamunyu`s story and what happened to his father. He was murdered by " Akena`s tribesmen) .

... My sense is that the cyle of violence will never come to end unless and untill there is REAL& EAQUL justice for all .

But Wooden, is there a proof your claim that Akena's tribesmen killed kanyamunyu. Or. Mr. Tibahaburwa did it and tied on them?

It is not a spin as you would like to insinuate. It is for that reason, why and how Mapto Oput and/or Jesus' turning the other cheek helps in the deescalation of the cycle of violence.

In other words, letting it go thru a lesser punishment.
Otherwise, you are free to have your way.
Report to administrator
0 #35 Wooden K. 2020-11-17 12:36
Two points of information to you Lakwena :

1-It was you who introduced Kanyamunyu`s orphanage story and how he was raised by the Byanyimas.
I take it then that you must know the circumstancies around his father`s death.

2- When Jesus talked about "turning the other cheek ,He was teaching against REVENGE ( not justice)

If it were elsewhere they would all have walked free from this case indeed they probably would not have been charged.

This case stopped being just a legal case long ago. Indeed most are upset because these people are Himas connected to current rulers and not concerned for the Akenas.

Kanyamunyu got six years as part of a deal. He did not just change his plea to guilty but to guilty on condition of six years. Prosecuters do make deals with criminals when the have good evidence. So why did Kanyamunyu deal when he have gone free?.
Report to administrator
0 #37 Plato 2020-11-17 15:14
My theory is that Kanyamuunyu was convinced to take the bargain by project life presidency.

They probably told him he had done a terrible thing but worse it was making them all look bad which could cost them. I mean for Mzee to go campaigning in Acholi land and being asked "but your boys are killing our sons ?"

So Kanyamunyu had to "sacrifice".himself . They might have even offered him $ 1 million for the sacrifice. If he even tried to resist the deal they could easily have threatened to bump him off. I know some think the change of heart was due to Akenas s ghost or some other issue . Cynical me thinks too fishy
Report to administrator
1234