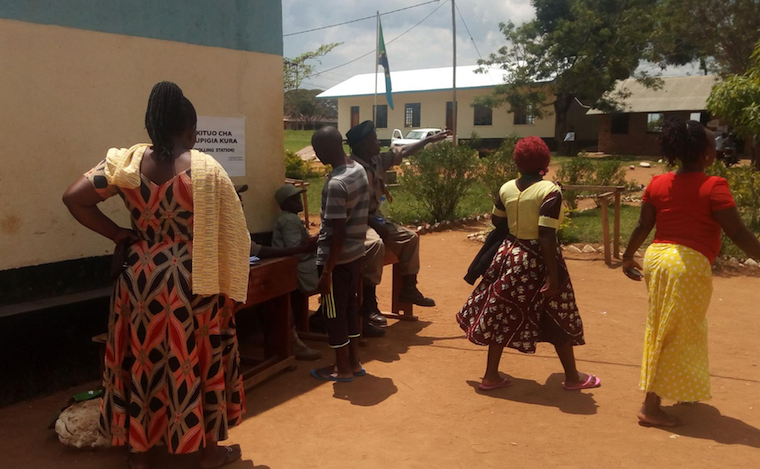 Some Ugandan nationals living along the Mutukula border in Kyoteta district participated in the general elections exercise in neighbouring Tanzania.

Tanzanians on Wednesday took to the polls to elect the president, members of the national assembly and local council leaders. However, some of the Ugandans living along Mutukula crossed over to the Tanzanian border district of Misenyi to also cast their ballots.

From our interviews, it transpires that to some people, they consider themselves as belonging to both countries, and with their livelihoods and families existing on either side, they felt compelled to participate in choosing the leaders they want to manage their affairs.

Rashid Mawanda a boda boda rider in Mutukula town council is among the dozens of Ugandans that participated in the Tanzanian elections.  He says despite him being in possession of a Ugandan national ID card, he also obtained the Tanzanian voter's card, one of the requirements to vote in Tanzania. Mawanda explains that many people especially those living along the border and are fluent in Kiswahili could easily register as voters in Tanzania while some obtained national IDs as well.

Hamid Jabar Kakuru, a cross border trader in Mutukula who also participated in the Tanzanian elections argues the many Ugandans have multiple homes and families inside Tanzania hence freely participating in its internal affairs including elections.

Kakuru, however, indicates that those who didn't pass the red tape (fluency in Swahili) during the registration exercise were turned away and their names have not featured on the voters’ registers.

Asked about the interest of participating in the affairs of a foreign country, Kigongo argues that it helps them freely interact with communities in both countries and smoothly transact business on either side of the border.

A polling assistant at Kabakesa polling station at one of Tanzania’s border villages who spoke on conditions on anonymity noted that they cannot rule out the possibility of Ugandans participating in the elections. He says that they allowed everybody who presented any of the requirements set by their National Electoral Commission.

According to him, the voters were validated on appearance in the voters register, presenting of Tanzanian national IDs, voters cards or a passport, saying it is possible that some non-citizens could have unscrupulously obtained any of the requirements.

Notably, the elections in Tanzania were conducted amid a shutdown of the internet and all social media that started on Tuesday. The tight race is between the incumbent President John Pombe Magufuli of Chama Cha Mapinduzi (CCM) party and Tundu Lissu of the Chadema Party, alongside other 13 candidates.

In 2014, the Tanzanian authority ejected most Banyarwanda and Burundian refugees from their territory. During verification by the Ugandan authority, many of them (persona non gratta) were found to have Ugandan National ID.

When they got here Mr. M7 and Co. owned them up as Ugandans who overstayed their welcome in Tanzania, but did not have any clue where their hometown.villages are.

Therefrom, to date nobody; nobody knows where these Rwandese/Burundians are.
Report to administrator
+1 #2 Wante Martino 2020-10-29 09:19
O.K, Tanzanians feel free to cross the border and vote in Uganda, please also informa Rwandese who want to come and vote too!
Report to administrator
+1 #3 WADADA rogers 2020-10-29 11:52
That is a reason for the opposition to be scared, Now that our Government has lent Tanzania our voters, it means even Tanzania shall lend us their voters during our elections and we all know the person they will vote
Report to administrator
0 #4 ismail 2020-10-29 14:35
Dual Nationality - Kiswahili (lugha)language
It’s true the people on the boarders of TZ or Kenya have relatives on both sides and have what you call grand father rights.

This entitles to vote in TZ in this instance especially as you say if they are fluent in Swahili something our leaders ignored. The ‘ broken’ Swahili spoken by men often in uniform tends to put off most Ugandans who perceive it to be nasty language especially if you are brutalised by men with such poor accent.

The language is now taught in Southern Africa yet here we are still deliberating on its rollout.
Report to administrator