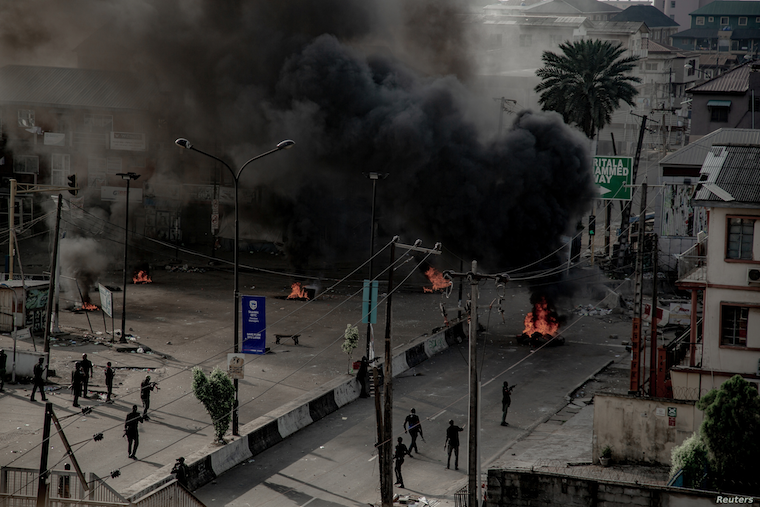 Armed men are seen near burning tires on a street in Lagos, Nigeria Oct. 21, 2020, in this image obtained from social media. (Credit: UnEarthical)

On Wednesday, hours after the shooting where several protestors were allegedly gunned down, angry youths in Nigeria launched reprisal attacks, burning and damaging many state-owned establishments, including media houses believed to be influenced by the government.

The home of Lagos state governor Babajide Sanwo-olu's mother was also targeted and razed to the ground. Protesters on Tuesday accused the military of opening fire on them as they defied a curfew to demand an end to police brutality. Nigeria's military has denied that the uniformed men, seen in social media videos firing on the unarmed protesters, were their troops.

Human rights organizations are blaming the government for the shooting. Ariyo Dare is the leader of one such group, the Nigeria Center for Liberty.

The international human rights group Amnesty International said in a report Wednesday, a total of 38 people died on Tuesday and at least 56 people over the past two weeks in protests directed at the police Special Anti-Robbery Squad, known as SARS, which Amnesty accused of torture and murders.

The government disbanded SARS last week but that has not tempered the outrage, with some demonstrators defying a curfew on Wednesday, which reportedly lead to more shooting, but there were no immediate reports of casualties.

"This protest cannot end with the way and manner the government has handled this protest. There is no way the protests will end in this format, even when the curfew is over Nigerians will still continue these protests," said Dare.

He spent hours in traffic but couldn't make it through roadblocks mounted by protesters. He then walked until he arrived at the Lekki toll gate and decided to join the protests.

No excuse. They're shooting directly at people in Aba #unarmed #EndSarsNow #LagosStateMassacre pic.twitter.com/YtlsTATKtS

Alonge says that around 7 pm, security men in military uniforms descended on the crowd and opened fire after disabling CCTV cameras and street lights, he said.

"They fired rounds and rounds of live ammunition on dispersing protesters. The security agents could use water or even whips, to disperse people but they used live ammunitions that killed plenty," said Alonge.

Other eyewitnesses say many protesters were killed during the shooting and many more gravely injured. However, Lagos officials say only one person has died, with others receiving treatment at hospitals in Lagosu state. Babajide visited injured protesters on Wednesday morning and urged Lagos citizens to remain calm.

Rights activists have accused Nigerian authorities in the past of using excessive force against citizens. Amnesty International has been investigating alleged rights violations by Nigerian forces for many years but the organization’s country director, Osai Ojigho, said the perpetrators remain emboldened.

"Our first report focusing specifically on the Special Anti-Robbery Squad (SARS) was done in 2016 and in that report, we gave specific recommendations that needed to happen. One of which was prosecuting violating officers, the second was entrenching the Police Service Commission in order for them to do their job, but sadly things continued. We continued to receive cases and we opened up even further research into this area,” said Ojigho.

The protests have been on for two weeks now. As tensions mount across Nigeria, the U.S. consulate in Lagos was shut down Tuesday. Nigerian netizens have posted on social media showing security personnel shooting directly at protestors.

+1 #1 Mandela 2020-10-22 14:29
The consequences of failure by those who have the cake today to share with the unpriviledged are what we see in Nigeria today.

If you do not educate the youth or if you give them shady education or if you educate them but give them no opportunities to thrive then you surely are going see such things whether you like it or not.
Report to administrator
0 #2 kabayekka 2020-10-24 10:13
That is what the famous Military Academy of Nigeria calls African modern army professional training!
Report to administrator
-1 #3 Akot 2020-10-25 19:11
Mandela, agreed!

Unfortunately, youths in shitholes have no real National Leadership to help them fight for their rights without violence! This is precisely why National Education is a necessity for ALL children, to allow them fight for common goals as it's them the young, who will always be the victims!

Ugandans have so much to learn from the outside world & they MUST wake up before Museveni drips dead in office!

Even going for Independent Tribal States NOW, will save Ugandans from the after Museveni that will be hell for ALL!

Do today 30 year old Ugandans want to raise their kids in the same Uganda they were raised in?

Ugandans don't need violence to get rid of Museveni, but saying NO to the tribalistic system & UNITY, then,

- Reforming the Republic, or

African security forces are trained to serve demon rulers, so they fight the people who pay their salaries!

I don't understand why Ugandans hate themselves & let/help Museveni treat them like rags!

Ugandans don't even believe/know their land riches belong to them & that they alone, in UNITY, have the power to bring change then go for the kind of governance they want!
Report to administrator